The German government is concerned about the spread of dangerous COVID-19 variants in France's Moselle region. Follow DW for the latest. 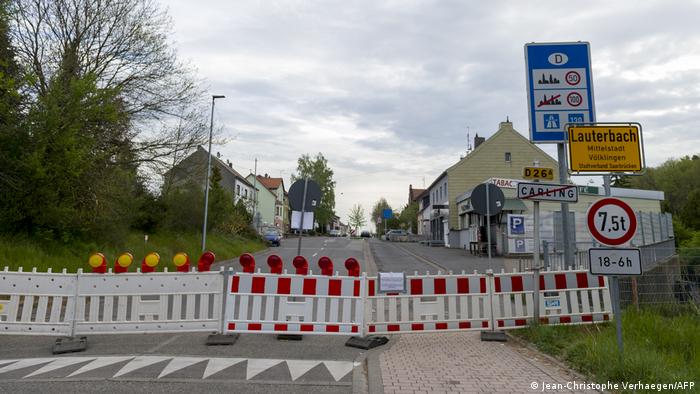 Germany has added France's eastern Moselle region to its list of "variant of concern" areas, triggering tougher entry requirements at the border between the two neighbors.

Under the new restrictions, almost all travel will be banned. There are only a few exemptions, including lorry drivers and certain key workers.

Anyone crossing the border will have to provide a valid negative COVID-19 test.

Earlier this month, Germany added the Czech Republic and Tyrol in Austria to its list of hotspots where the UK and South African variants — thought to be more contagious — are spreading.

The travel restrictions for Moselle are due to take effect from Tuesday.

The majority of people in Germany are still in support of the current lockdown measures, but the share has been slowly dropping, a poll published on Sunday by the Welt am Sonntag.

The share of the population which considered the coronavirus measures appropriate was at 63% in February, down from 69% in November and 73% in September.

Germany's Robert Koch Institute reported 7,890 new cases in the past 24 hours on Sunday. There were also 157 coronavirus deaths reported — this brought the total number of deaths in the country since the beginning of the pandemic to over 70,000.

German regional broadcaster MDR reported Sunday that three German states are sending a combined 15,000 doses of the vaccine to the Czech Republic.

Saxony, Bavaria, and Thuringia have agreed to send vaccines to the country that has had the highest per capita infection rate in the world over the past week.

Britain's government says families with children in school will be provided with free twice-weekly coronavirus home test kits, regardless of whether anyone has symptoms.

The tests will be offered as part of plans for schools to reopen, beginning on March 8.

Meanwhile, the UK has administered a vaccine jab to over 20 million citizens, health minister Matt Hancock confirmed on Twitter.

England's public health authority said a variant first identified in the Brazilian city of Manaus has been found in the country.

The World Health Organization (WHO) has been notified of the six cases "of concern" as they share mutations with a more contagious variant that was detected in South Africa.

Hungarian Prime Minister Viktor Orban has been vaccinated against coronavirus, he announced on his official Facebook page on Sunday.

He received the shot developed by China's Sinopharm pharmaceutical company.

Danish police have arrested eight people at an anti-lockdown demonstration in Copenhagen.

The largely peaceful rally late Saturday was attended by around 1,200 people. It was the first such protest since the government announced last week that it was extending many anti-coronavirus restrictions.

The police said they arrested people for allegedly using fireworks and for rowdy behavior.

The US Food and Drug Administration approved the Johnson & Johnson vaccine for emergency use on Saturday evening, making it the third vaccine to be given the green light in the country.

The J&J jab also received a ringing endorsement from Dr. Anthony Fauci, the top US infectious disease official, as he encouraged Americans to accept any of the three approved shots.

"All three of them are really quite good, and people should take the one that's most available to them. If you go to a place and you have J&J, and that's the one that's available now, I would take it," Fauci told NBC.

A US Centers for Disease Control and Prevention (CDC) advisory panel voted Sunday to recommend the Johnson & Johnson vaccine for widespread use. That is the final clearance for the vaccine after it was cleared for use by US regulators on Saturday.

The CDC director is expected to approve the recommendation from the panel.

Thousands of Argentinians gathered in front of government buildings in Buenos Aires on Saturday evening to protest "vaccine privileges." The revelation that people close to the minister of health had been able to jump the queue sparked outrage and ended with the minister losing his position.

Nigeria expects to become the third West African country to receive vaccines from the COVAX program. It is expecting 3.92 million doses in the shipment.

The country is expecting 16 million overall doses in the next few months from COVAX. The country plans to vaccinate 40% of its some 200 million people by the end of the year, and 30% more in 2022.

South African president Cyril Ramaphosa said there is an agreement to secure 11 million Johnson & Johnson vaccines through the end of the year.

About one-fourth of those vaccines would come in the second quarter of 2021. Ramaphosa added that the cabinet decided to ease restrictions on movement due to a drop in cases, downgrading the national alert level from 3 to 1.

Iran's coronavirus fatalities broke the 60,000 mark on Sunday after a further 93 people died in 24 hours, according to the Health Ministry.

The Islamic Republic is battling the Middle East's worst outbreak of the illness.

Residents in New Zealand's biggest city Auckland  woke up on Sunday to a second lockdown this month.

The seven-day lockdown was announced by Prime Minister Jacinda Ardern, after a community coronavirus case was found with no links to a previous cluster.

The person had also been infectious for a week but was not in isolation, fueling concerns that there could be additional cases.

Thailand launched its vaccination program on Sunday, administering doses of the Chinese SinoVac vaccine to frontline health and medical workers as well as cabinet ministers.

Prime Minister Prayuth Chan-ocha, 66, fell outside of the age range of the SinoVac vaccine — 18 to 59 — and so did not receive a dose.

The Philippines has received its first batch of COVID-19 vaccines. The 600,000 doses were donated by China.

The country is among the last in Southeast Asia to secure the critical doses despite having the second-highest number of coronavirus infections and deaths in the hard-hit region.