The European Union has called on member states to monitor wastewater to detect COVID outbreaks early. Brazil President Jair Bolsonaro's opponents have accused him of not buying enough vaccines. Follow DW for more. 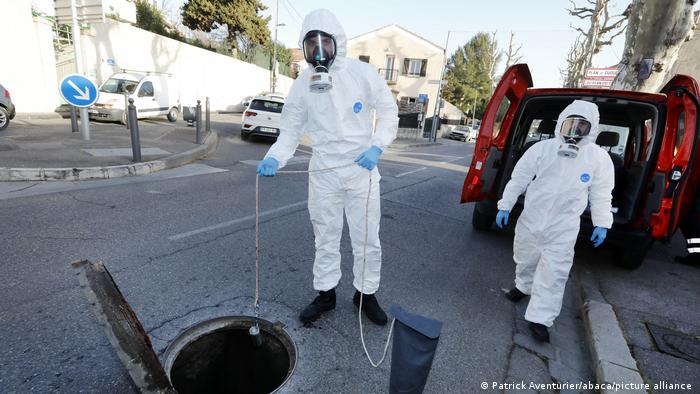 Authorities in Marseille, France, have taken regular samples from wastewater to detect the presence of COVID-19

The European Commission on Sunday called on EU member states to regularly monitor sewage systemsfor fresh outbreaks of the coronavirus.

"It is crucial that EU countries set up effective wastewater monitoring systems as soon as possible and ensure the relevant data are immediately made available to health authorities," Environment Commissioner Virginijus Sinkevicius told the German newspaper Welt am Sonntag.

She said they were an "inexpensive, fast and reliable source of information about the spread of the virus and its variants in the population." Large cities and municipalities should analyze at least two samples weekly in what Sinkevicius said was "a proven concept in public health insurance."

Some European countries have already begun monitoring sewage systems and were able to forewarn about worsening outbreaks. Wastewater systems are also used to gain knowledge about the extent of the use of illegal drugs in the population.

The UK said on Sunday it will send an additional 1,000 oxygen ventilators to India, as a group of doctors staged their own intervention by offering long-distance telemedicine from Britain.

A German military aircraft with 120 ventilators reached India late Saturday, as the South Asian country grapples with a catastrophic new wave of infections.

A shortage of oxygen in hospitals has worsened the rising death toll in India, which has now reached 215,542. On Sunday, the country of some 1.3 billion people recorded 3,689 deaths from the coronavirus.

Taiwan has also shipped medical supplies to India, including 150 oxygen concentrators and 500 oxygen cylinders, joining more than a dozen other states that have offered help.

On Sunday, vote counting began in five Indian states from elections held in March and early April. Prime Minister Narendra Modi has been censured for holding election rallies before the votes that critics say became superspreader events for the virus.

In Australia, the fourth-largest city of Perth faces a second snap lockdown in less than a month, after a hotel security guard and two of his housemates tested positive for the coronavirus.

As a precaution, nightclubs will close and a weekend football match at which 45,000 people were previously expected to attend will now be closed to spectators. Perth only emerged from a three-day lockdown last week.

Australia has all but stamped out community infections after closing its borders to non-citizens in March 2020, recording just 29,800 cases and 910 deaths. The country has banned citizens who had been in India within 14 days from returning home, threatening them with fines and jail.

As of May 4, Nigeria is to ban travelers coming from India, Brazil and Turkey due to the rapid spread of coronavirus in those countries, a presidential committee said.

"Non-Nigerian passport holders and non-residents who visited Brazil, India or Turkey within Fourteen (14) days preceding travel to Nigeria, shall be denied entry into Nigeria," Boss Mustapha, chairman of the presidential steering committee on COVID-19, said in a statement.

A German hotel chain is suing the government over what it says is the unfair distribution of COVID relief funds. The Dorint Hotel group, along with other similar establishments, have been closed to tourists since November to reduce the spread of the virus.

The development is a welcome sight for German hospitals, which are starting to see a "slight easing" in new infections, the head of the German hospital federation DKG said on Sunday.

"We are looking at about two weeks of relatively constant numbers in terms of new infections, which gives us confidence that we don't have to be concerned about an exponential rise in patients in need of intensive care," DKG President Gerald Gass told the mass-circulation Bild newspaper.

Some 5,019 COVID patients are being treated in intensive care units — compared to a peak of 5,106 on April 26, the paper reported.

In Spain, bullfighting fans were allowed to return to the arena for the first time since the start of the pandemic. A charity event to support the industry was held in Madrid, with authorities capping attendance to 6,000. Spectators sat in assigned seats and were required to wear masks.

The Czech Republic will allow everyone aged 16 and up to register for a COVID vaccine starting on June 1. Prime Minister Andrej Babis announced the move on Sunday, saying that if vaccine supplies remain stable as planned the age threshold could be lowered each week by five years. Currently, vaccines are available to all people age 55 or older.

In Belgium, police forcibly broke up a party at a park in Brussels on Saturday, after hundreds of people defied a ban to protest COVID-19 restrictions.

Some protesters tossed bottles at officers and set off fireworks before authorities moved in. Police deployed water cannons and fired tear gas at the crowds to get them to disperse, as 132 people were arrested.

Pope Francis has launched a month-long prayer marathon to hasten the end of the pandemic with a prayer at St. Peter's Basilica in the Vatican before some 150 believers.

The series will be streamed live each day this month at 6 p.m local time (1600 GMT/UTC) from different Catholic shrines across the world.

They range from Fatima in Portugal and Lourdes in France to shrines in Poland, Nigeria, Cuba and South Korea as well as the Basilica of the Shrine of the Immaculate Conception in Washington DC.

In Russia just 9 million people — or 6% of the population — have so far received their first and second vaccine doses, state television reported.

Russian scientists have developed three vaccines. The first of which — Sputnik V — has been on the Russian market for almost nine months.

Despite Sputnik V's proven effectiveness, surveys of Russians find that many have no desire to be vaccinated due to skepticism over the safety of the shots. In addition to vaccine hesitancy, there are also reports of many Russian regions struggling to obtain doses.

Brazil with more than 403,000 COVID-19 deaths, is second only to the United States, and Bolsonaro faces widespread criticism for not taking the pandemic more seriously.

Last week, a Senate commission of inquiry was established to examine the government's handling of the health crisis, with many experts saying it has been incompetent and irresponsible.

Key opposition leaders on Saturday took part in a May Day workers' event on social media and used their speeches to hit out at the president. Among them were former president Luiz Inacio Lula da Silva, who is expected to challenge Bolosonaro in next year's election.

"This is a sad May Day for the workers of our country, a day of mourning for the 400,000 lives lost to COVID-19, many of them because the government of Bolsonaro refused to buy the vaccines that were being offered," Lula said.

Reporter - Vaccinating Against COVID-19 in Alaska

In Canada, tens of thousands of people rallied Saturday at Montreal's Olympic Stadium, against COVID restrictions. The protesters, mostly unmasked and ignoring social distancing rules, said the curbs imposed by the Quebec government were "unjustified."

Signs in the crowd expressed opposition to masks, curfew and health passports. A heavy police presence was on hand, although the event proceeded largely in a festive atmosphere to the rhythm of drums.

Starting Monday, the nightly curfew in Montreal will begin at 9:30 p.m., instead of 8 p.m, officials said.

Dozens of other patients were rescued at the hospital in Bharuch, western India. The incident comes as India's health care system struggles amid an unprecedented surge in coronavirus cases.