A severe outbreak of a more contagious variant has emerged in Austria's Tyrol state, prompting the EU to send extra doses of the BioNTech-Pfizer vaccine. DW has the latest. 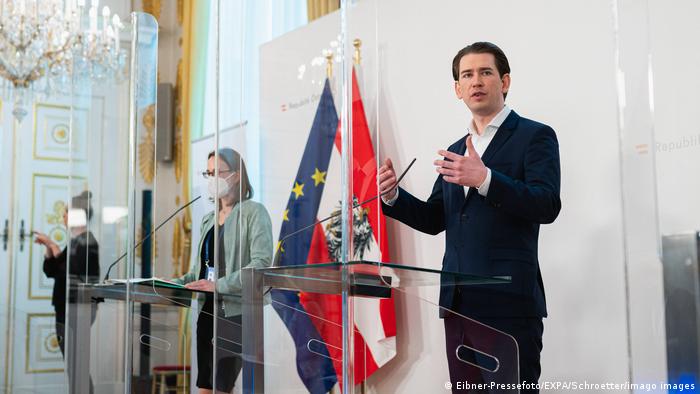 Austria will be given an additional 100,000 BioNTech-Pfizer vaccine doses as part of an EU initiative to help quell an outbreak of the South African variant of the coronavirus in the western state of Tyrol.

"Our goal must be to extinguish as best we can this variant, which represents a threat for us, not only in Tyrol, but in all of Austria," Chancellor Sebastian Kurz told a news conference.

The Alpine region of Tyrol has one of Europe's worst outbreaks of the more contagious variant, and residents require a negative test result in order to leave the province.

The efficacy of the BioNTech-Pfizer jab will be studied, as research has suggested this variant may be more resistant to vaccines.

A commission of international scientists, dispatched by the EU, will accompany the vaccination campaign in the Austrian district of Schwaz to evaluate its efficacy in eliminating the highly contagious variant.

"Our goal is to stymie this large cluster and move towards zero infections, as much as this is possible," Chancellor Kurz added.

Every adult resident of the district, with a total population of about 80,000, will be offered a jab, with the process starting around March 10.

Gene mutation – how afraid should we be?

COVID-19 Special: Mutations – how afraid should we be?

Two sisters of King Felipe VI of Spain have admitted that they have received vaccine doses during a visit to the United Arab Emirates.

In a statement published by La Vanguardia, the Infantas Elena, 57, and Cristina, 55, said they were "offered the possibility" of receiving the jabs while in Abu Dhabi visiting their father, former monarch Juan Carlos I.

The sisters said they agreed to accept the doses "with the goal of obtaining a health passport" that would enable them to regularly visit their father, who left Spain in August amid allegations of financial wrongdoing.

Their statement came a day after the Spanish online newspaper El Confidencial reported their inoculations, for which neither of the Infantas are yet eligible in their homeland.

At the moment, Spain only allows vaccines for the elderly and essential workers. A handful of public officials, including the country's top military commander, have been forced to step down after they were caught jumping the vaccination queue.

COVID-19 Special: Getting hitched in the pandemic

Germany has moved a step closer to approving the AstraZeneca coronavirus vaccine for those aged over 65.

Health Minister Jens Spahn, who was speaking at a meeting between the government and Germany's 16 states over possible steps to ease the country's lockdown, said a decision was imminent, after new data on the jab's efficacy emerged from Scotland and England.

Police in the Netherlands have suggested an explosion at a coronavirus testing center in the town of Bovenkarspel, about 50 kilometers (31 miles) outside of Amsterdam, was intentional. Windows were shattered by the blast but no there were no injuries, police said, adding that they had cordoned off the area to investigate.

Hungary plans to administer AstraZeneca's coronavirus vaccine to those aged 60 and over after data showed its efficacy among older people, Surgeon General Cecilia Muller said.

Last week, Hungary became the first EU member to start inoculating people with China's Sinopharm vaccine, in addition to Russia's Sputnik V, even though neither version has been granted approval by the bloc.

Lithuania is continuing to ease restrictions, as infection rates begin to diminish.

From Saturday, members of two households will be allowed to meet outside, while sports, leisure and entertainment activities in groups of up to five people will also be possible.

Libraries, open-air museums, nature parks, zoos, botanical gardens and other outdoor facilities will also be able to reopen this weekend, in accordance with the new rules.

Citizens will not be allowed out of their homes between 8 p.m. and 5 a.m., according to a government decree.

At other times of the day, Slovaks are being asked to stay at home with some exceptions, such as medical visits, going to work, and walks in nature or with pets.

Nevertheless, the director of the Africa Centers for Disease Control and Prevention, John Nkengasong, offered a stark warning for both the continent and the rest of the world: "We will be known as the continent of COVID'' if Africa doesn't quickly reach its target of vaccinating 60% of its population of 1.3 billion people, he said.

So far Ghana, Ivory Coast, Nigeria, Angola, Gambia and Congo have received their first vaccine doses, with several other countries, including Mali, Senegal, Malawi and Uganda, set to receive shipments this week.

Low- and middle-income countries are receiving their first deliveries as part of the COVAX shared-procurement program.

Some health officials expressed a mix of joy and relief as the first doses arrived. "We have been fighting the pandemic with rubber bullets but what we have acquired today is equivalent, metaphorically speaking, to bazookas and machine guns," Kenyan Health Minister Mutahi Kagwe said.

From March 11, Malaysia will force anyone who tests positive for COVID-19 to wear an electronic tracking device, Health Minister Adham Baba said.

"The device is to be worn for 10 days," the minister said, adding that penalties would be imposed if a wearer removed, altered, destroyed or lost it. The requirement will also apply to people deemed close contacts of anyone who tests positive.

The interim analysis of results from an Indian vaccine maker's late stage trials shows its vaccine to be about 81% effective.

The Bharat Biotech jab was controversially approved by India in January without waiting for trials to confirm that the vaccine was effective. Since then, 1.3 million doses of the vaccine have been administered to people across India.

"As long as COVID-19 endures in one part of the world, the rest of the world can never be safe," PAHO director Carissa Etienne said in a briefing.