Australia has reported its highest number of daily COVID-19 deaths since the start of the pandemic. Meanwhile, China has imposed new COVID rules on parcels from abroad. DW has the latest. 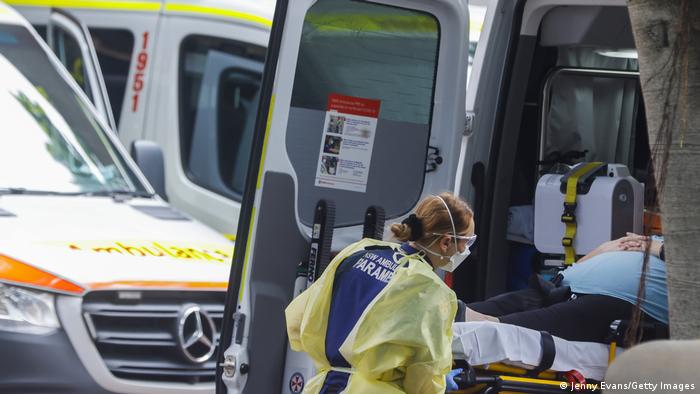 Australia has reported its highest death toll amid the coronavirus pandemic

Australia recorded its deadliest day of the coronavirus pandemic on Tuesday as its second-largest state declared an emergency in hospitals to cope with record patient admissions.

The country reported a total of 74 deaths across its three most-populous states: New South Wales (36), Victoria (22) and Queensland (16).

Only four of those who died in NSW had received their booster shot, leading the state's health officials to call on people to avoid delays in getting their third dose.

"There needs to be a sense of urgency in embracing the booster doses," NSW Chief Health Officer Kerry Chant said. "For omicron, we know that the protection is lower and we need that next boosting to get that higher level of protection."

Meanwhile, Victoria declared an emergency for hospitals in the state's capital, Melbourne, and several regional hospitals from Wednesday due to a staff  crunch and rising hospitalization rate.

Nearly 5,000 staff are absent in the state because they have either contracted the virus or are close contacts with people who have been infected.

Could omicron be the beginning of the end of the pandemic?

Germany's public health agency, the Robert Koch Institute, on Tuesday reported a new record seven-day incidence rate per 100,000 people of 553.2 — up from 528.2 a day previously. The number of new daily cases was 74,405.

And according to a study cited by the daily Süddeutsche Zeitung, 43% of all households in Germany say they have suffered losses of income or savings during the pandemic. The main groups affected were 30- to 39-year-old employees, single parents or caregivers, the self-employed and workers in the health, social welfare, entertainment and arts sectors.

The Czech Republic has recorded its biggest daily jump in COVID cases since December 1, reporting 20,270  new infections on Monday as the omicron variant gains ground. The country this week began mandatory testing of employees at companies.

Denmark on Tuesday reported well over 30,000 new COVID-19 infections in one day.

According to the country's national health authority, 33,493 cases were detected, making it the highest since the pandemic began. There were also 14 deaths during this period.

There have been nearly 1.2 million infections in the country since the start of the pandemic.

The European Union's head of vaccine strategy said that pharmaceutical companies should keep an eye on more than one upgraded COVID-19 shot, as opposed to just focusing on one that tackles the omicron variant.

"What we are hearing from other regulatory agencies also is that it is important not to exclude any options," the health watchdog's head of vaccines strategy, Marco Cavaleri said.

Last week BioNtech's Chief Executive Ugur Sahin asked whether there was a need to develop shots for more than just the omicron variant.

Meanwhile the European Medicines Agency (EMA) said that according to research, two of the most widely administered vaccines — Moderna and BioNTech-Pfizer — pose no risk to pregnant women or their babies.

"The review did not find any sign of an increased risk of pregnancy complications, miscarriages, preterm births or adverse effects in the unborn babies following mRNA COVID-19 vaccination," the EMA said in a statement.

The regulator said it had carried out a "detailed review of several studies" which involved around 65,000 pregnancies at varying stages.

The World Health Organization's (WHO) head of emergencies, Michael Ryan, said on Tuesday that that the worst of the pandemic could be over this year if serious issues were addressed.

Ryan said that "we have a chance to end the public health emergency this year if we do the things that we've been talking about.''

The unequal distribution of vaccines has been a major bone of contention for the WHO.

"What we need to do is get to low levels of disease incidence with maximum vaccination of our populations, so nobody has to die,'' Ryan said.

"Make no mistake, omicron is causing hospitalizations and deaths, and even the less severe cases are flooding health facilities," Tedros said on Tuesday.

At the same time, WHO chief scientist Soumya Swaminathan said that there wasn't evidence to suggest that healthy children or adolescents required booster shots of vaccine.

Speaking at a briefing, Swaminathan said that more research was still needed to determine who would need a booster shot.

WHO: "Blanket booster programs are likely to prolong the pandemic"

In China, an app which all of those attending the Beijing Olympics must use has been found to have encryption flaws according to a cyber security watchdog.

According to Jeffrey Knockel, author of the Citizen Lab, the flaw could expose users personal information.

The International Olympic Committee said that users could disable access to parts of their phones and that other assessments from cyber security organizations found there were "no critical vulnerabilities." DW has more with this exclusive story.

The postal service in China has ordered workers to disinfect foreign parcels, and authorities urged people to wear masks and gloves when opening their delivery packages, especially the ones from abroad.

Tuesday's measures come after authorities suggested that the first case of the omicron variant found in Beijing could have arrived via a package from Canada.

Multiple small outbreaks over the past few weeks — including in Beijing — have challenged China's stringent policy of targeting zero COVID-19 cases.

Hong Kong authorities say they will cull some 2,000 small animals, including hamsters, after a series of infections at a pet store. The city is also to stop the sale of hamsters and the import of small mammals, officials say.

In Japan, Prime Minister Fumio Kishida has announced plans to impose a state of quasi-emergency. This will mean more severe restrictions on dining and gatherings in 13 regions, including Tokyo.  The measures are to be in effect from January 21 to February 13. 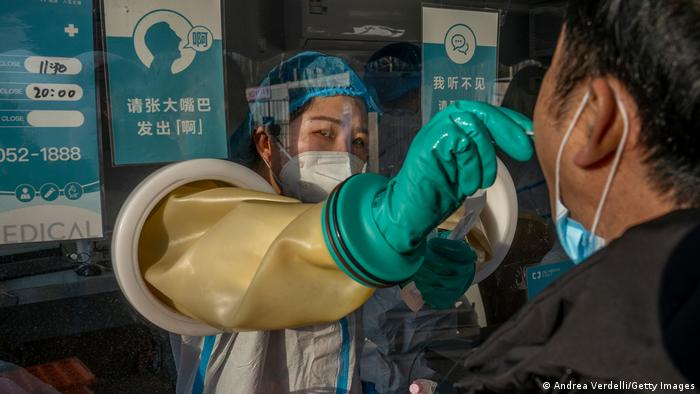 China is taking a particularly rigorous approach to taming the pandemic

Ecuador has declared a red alert across most of the country, following a 10-fold rise in COVID-19 cases. Schools have also been shut until January 21.

Canada has approved Pfizer's oral antiviral treatment for mild to moderate cases of COVID-19 in adults. However, it said not many doses were currently available owing to global supply shortages.

It’s too soon to understand the effectiveness of a fourth vaccine dose, according to the top EU drug regulator. But some countries have already authorized the shot.