China's Hubei province, the hardest hit, reported 103 dead, the highest single-day toll since the virus began to spread. The World Health Organization says the virus posed a "very grave threat" to the rest of the world. 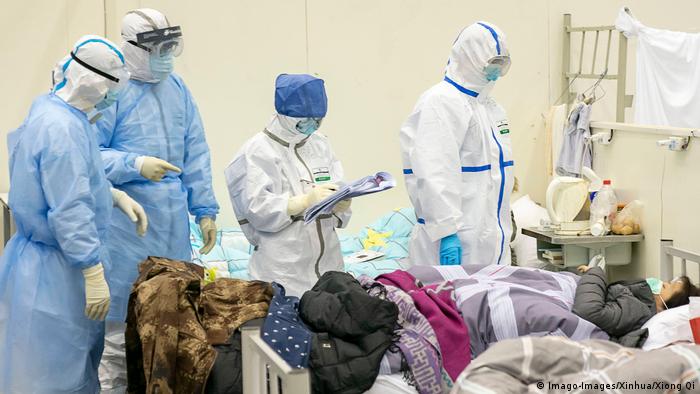 The death toll from the coronavirus outbreak in China topped 1,000 on Tuesday, as the World Health Organization (WHO) warned that countries must not let the epidemic get out of control.

Hubei, the epicenter of the outbreak, reported another 103 deaths, while five more were reported outside of the province, bringing the total in mainland China to 1,016 after the highest single-day toll since the virus began to spread.

There are now more than 42,000 confirmed cases in China, as well as 319 in 24 other countries, including one death, according to the WHO and Chinese health officials.

The outbreak poses a "very grave threat for the rest of the world," WHO Director-General Tedros Adhanom Ghebreyesus said on Tuesday, addressing more than 400 researchers and national authorities at the start of a two-day meeting to agree on a road map for finding a cure and vaccine for the virus.

In China, President Xi Jinping called for "decisive" measures to tackle the outbreak, in a visit to a frontline hospital in Beijing. Xi wore a face mask and had his temperature checked while visiting medical workers and patients affected by the outbreak.  He also said the situation was still "very grave," according to state broadcaster CCTV.

Meanwhile, Hong Kong Chief Executive Carrie Lam said her government would consider placing tracking devices on people who violate the regulations of their quarantine. She has also called for "social cohesion" during the outbreak and urged residents to stay home as much as possible.

Read more:From bats to pangolins, how do viruses reach us?

The outbreak is also creating a grim outlook for China's economic growth rate, which could decrease by as much as one percentage point in 2020, according to a senior member of a government think tank.

Zeng Gang, vice chair of the National Institution for Finance and Development, compared the current crisis with the SARS epidemic of 2003, when China's growth was reduced by about two percentage points over a single fiscal quarter.

"At present, according to different scenario assumptions, researchers expect the negative impact of the epidemic on full-year GDP growth to be in the range of 0.2% to 1%," he said. However, if the official response to the epidemic is swift and effective, long-term growth trends might not be significantly affected.

He also added that the "employment situation is not optimistic," regarding potential problems following economic stress placed on small companies because of the virus.

Meanwhile, the Diamond Princess cruise ship holding more than 3,700 passengers and crew on board was still quarantined in the Japanese port of Yokohama, with an additional 65 infections reported. The number of confirmed cases on the vessel is now up to 135.