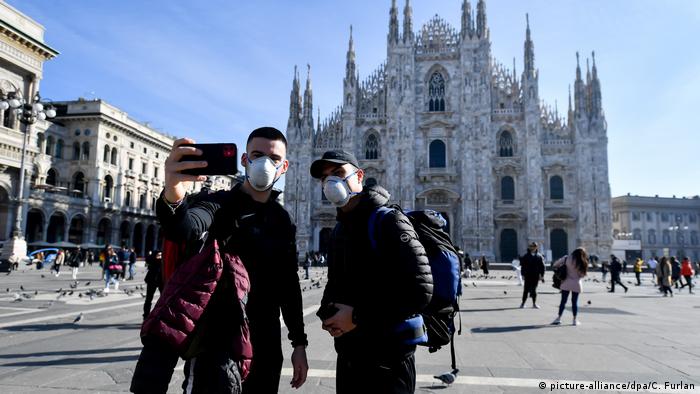 Italy has put several cities and towns in the country's north on lockdown, banning people from entering or leaving affected areas, suspending public events and closing attractions, such as museums, to the public. The measures effectively put an estimated 100,000 people under quarantine.

Authorities, after canceling a number of top league football matches over the weekend, have ordered Serie A football games to be played to empty stadiums as fans will be asked to stay away. Venice Carnival events ended prematurely and in the northern regions of Lombardy and Veneto schools and universities are closed until March. In Milan, the fashion week has been shortened and another fair has been postponed until the summer. Milan Cathedral, one of the main tourist attractions, is also closed, as is the famous opera house, La Scala in Milan. 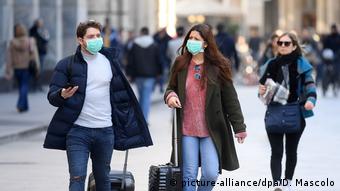 Tourists with face masks in Milan

The virus is migrating

The virus has long since left the borders of northern Italy. Florence has its first coronavirus patient, an Italian entrepreneur who has returned from Singapore, as has Palermo, where a tourist from Bergamo tested positive for the virus.

From the end of January until the end of April there will be no more direct flights between Italy and China. But all of this has been of little use. Italy has so far suffered the most victims and infected persons in Europe making it a hotspot for the virus.

Thousands of holidaymakers and workers have been quarantined in a hotel in Tenerife after an Italian doctor and his wife tested positive for coronavirus. Austria has also placed an Innsbruck hotel under lockdown when an Italian receptionist was found to have contracted the virus.

And the reaction of the European neighbors to the coronavirus crisis in Italy? Hungary is recommending that its citizens postpone any planned trip to northern Italy, while the Bulgarian airline Bulgaria Air plans to suspend its flights between Sofia and Milan until the end of March.

In Great Britain, concern about the proliferation of cases in northern Italy prompted a dozen UK schools to send home pupils and the teachers who accompanied them on half-term skiing trips in the Italian Alps, telling them to self-isolate for 14 days after their return. The government has asked tourists returning from northern Italy to go into self-isolation if they develop flu-like symptoms.

The coronavirus and tourism in Germany

In Germany, the Federal Foreign Office is refraining from issuing travel warnings. People traveling to Italy should contact the relevant embassies abroad and the Italian Ministry of Health if necessary.

In a sign of growing fears over the economic impact of the outbreak German airline Lufthansa said it was suspending recruitment of new staff, offering existing employees unpaid leave and expanding options for part-time work. "In order to counteract the economic impact of the coronavirus at an early stage, Lufthansa is implementing several measures to lower costs,'' the airline said. Lufthansa, which also owns Swiss and Austrian Airlines, has already suspended flights to and from mainland China until the end of March and scaled back connections to Hong Kong.

Italian authorities have placed some 50,000 people in the country's north under de facto quarantine due to a rise in coronavirus infections. Villagers are adjusting to this new reality, Bernd Riegert reports from Italy. (24.02.2020)