South American champions Chile beat Colombia 2-0 and move a step closer to securing back-to-back Copa America victories. But in the final, the holders will meet a stern test in Argentina and Lionel Messi. 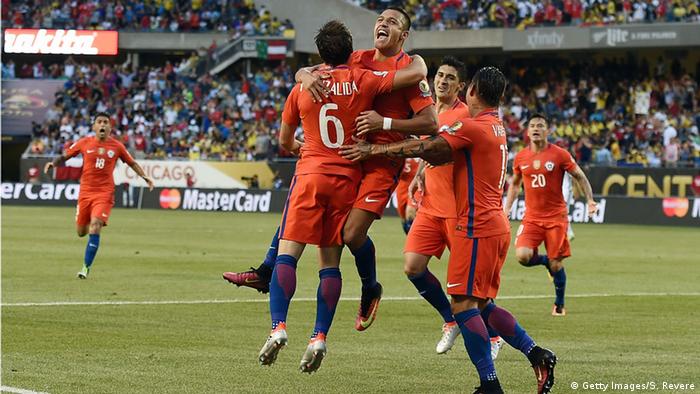 Chile and Argentina will play out a rematch of last year's Copa America final. That was after the holders defeated Colombia 2-0 in Chicago.

The Chileans, who won the competition for the first time on home soil last year, followed up on their sensational 7-0 win over Mexico with a relaxed win over the Colombians.

Bayer Leverkusen's Charles Aranguiz opened the scoring in the seventh minute, and Jose Pedro Fuenzalida gave Juan Antonio Pizzi's side a cushion soon after. A severe thunderstorm forced a delay of almost three hours and the 50,000 supporters had to seek shelter indoors. But it did nothing to change the result.

"These players' main virtue is that they are winners," said Chile coach Pizzi. "Before they play a match or a tournament, they are convinced that they are going to win it. That conviction allows them to play as they do and to have the confidence they have in games."

"We need to admit our bad start, which cost us two goals," said Colombia coach Jose Pekerman. "It's normal for Chile to attack like they did, and we could not control them."

Arsenal's Alexis Sanchez secured his 100th international cap as Chile booked their spot in the final for the sixth time. Lionel Messi and Argentina can pull level with Uruguay's record 15 title wins, if they come out on top at the MetLife Stadium in New Jersey on June 27.