Saudi Arabia has announced a comprehensive transformation strategy toward a green future. But what are the real drivers of the world's biggest oil exporter's "net-zero" vision for 2060? 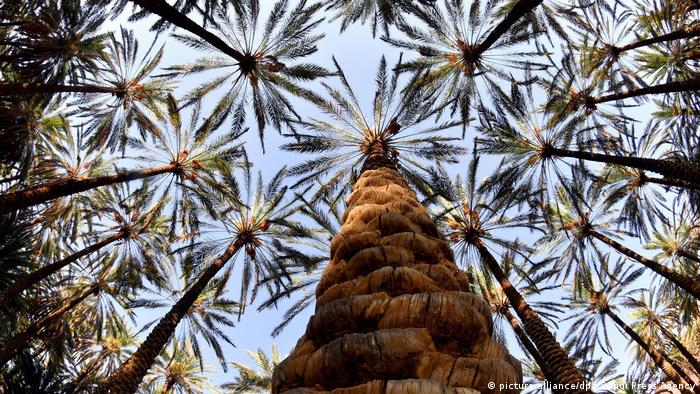 Saudi Arabia, which suffers from desertification and rising temperatures, has joined the sustainability race

It was a regular hot and sunny day in late October in Riyadh, when Dalia Samra-Rohte, delegate of the German Industry & Commerce for Saudi Arabia, and Germany's ambassador to the kingdom, Dieter Lamle, were busy planting a crown-of-thorns sapling in Bödeker Park.

It won't be growing tall alone — earlier this year, the Saudi kingdom revealed plans to plant 7.5 million trees in Riyadh, and 450 million trees across the country. 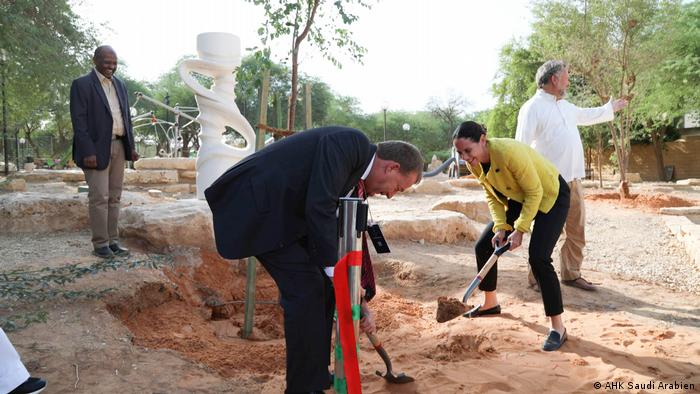 Dalia Samra-Rohte, the German delegate of the German Industry and the German ambassador to Saudi Arabia, Dieter Lamle, planted a tree in Riyadh

Saudi Arabia might be a Middle Eastern country with a harsh desert climate, best known for its vast oil reserves, but right now it appears to be riding a green wave.

In the runup to the Glasgow climate summit COP26, Saudi Arabia held its own regional environmental conference. At the summit, Crown Prince Mohammed Bin Salman, commonly referred to as MBS, announced a "net-zero" greenhouse gas emissions plan by 2060, as a pillar of the new "Saudi Green Initiative." A further regional initiative has been started under the name "Middle East Green Initiative."

The kingdom will also be ramping up a Circular Carbon Economy approach, CCE for short, which involves capturing and storing carbon dioxide and thus removing 200 million tons of carbon emissions from the atmosphere through a "reduce, reuse, recycle and remove" strategy.

Saudi Arabia is the world's top oil exporter, the oil and gas sector accounts for around 50% of its GDP. Environmentalists are therefore skeptical about its sudden repositioning.

Some experts believe the country is genuinely committed to steering a new course, but question its motivation.

"Everything that is now being heard from Saudi Arabia, including what has emerged in recent years, does not deserve to be generalized as greenwashing," Tobias Zumbrägel, researcher at the Bonn-based Center for Applied Research in Partnership with the Orient (CARPO), told DW in a video call. "That's too simple, as we can see a comprehensive transformation process that goes well beyond a PR campaign."

But the transformation is not necessarily driven by love for the planet. The global oil price has been volatile, and international pressure to become carbon neutral has increased since the Paris Climate Agreement in 2015.

"Saudi Arabia's sustainability agenda has very little to do with environmental protection or an inherent interest in advancing ecological endeavors," said Zumbrägel. He sees the process as a way for the leadership to get "political leeway" and sees it as serving "economic interests."

Others also have reservations about Saudi Arabia's green credentials.

Karim Elgendy, associate fellow with the London-based think tank Chatham House and founder of Carboun, an advocacy initiative promoting sustainability in cities of the MENA region, highlighted in an op-ed for Aljazeera that the "Saudi climate commitments are conditional on its ability to maintain its fossil fuel exports."

But even the Saudi Energy Minister, Prince Abdulaziz bin Salman — brother of Crown Prince Mohammed Bin Salman — has confirmed the kingdom's position. "The kingdom's economic growth is driven by export of its energy sources. It's no state secret," he said at the recent Saudi Green Initiative Forum in Riyadh.

Underscoring that point, the national oil company Saudi Aramco, the world's biggest oil company, is also one of the world's most profitable companies. In the third quarter of 2021, it left the likes of Google, Amazon, ExxonMobil and Shell behind to take the top spot. 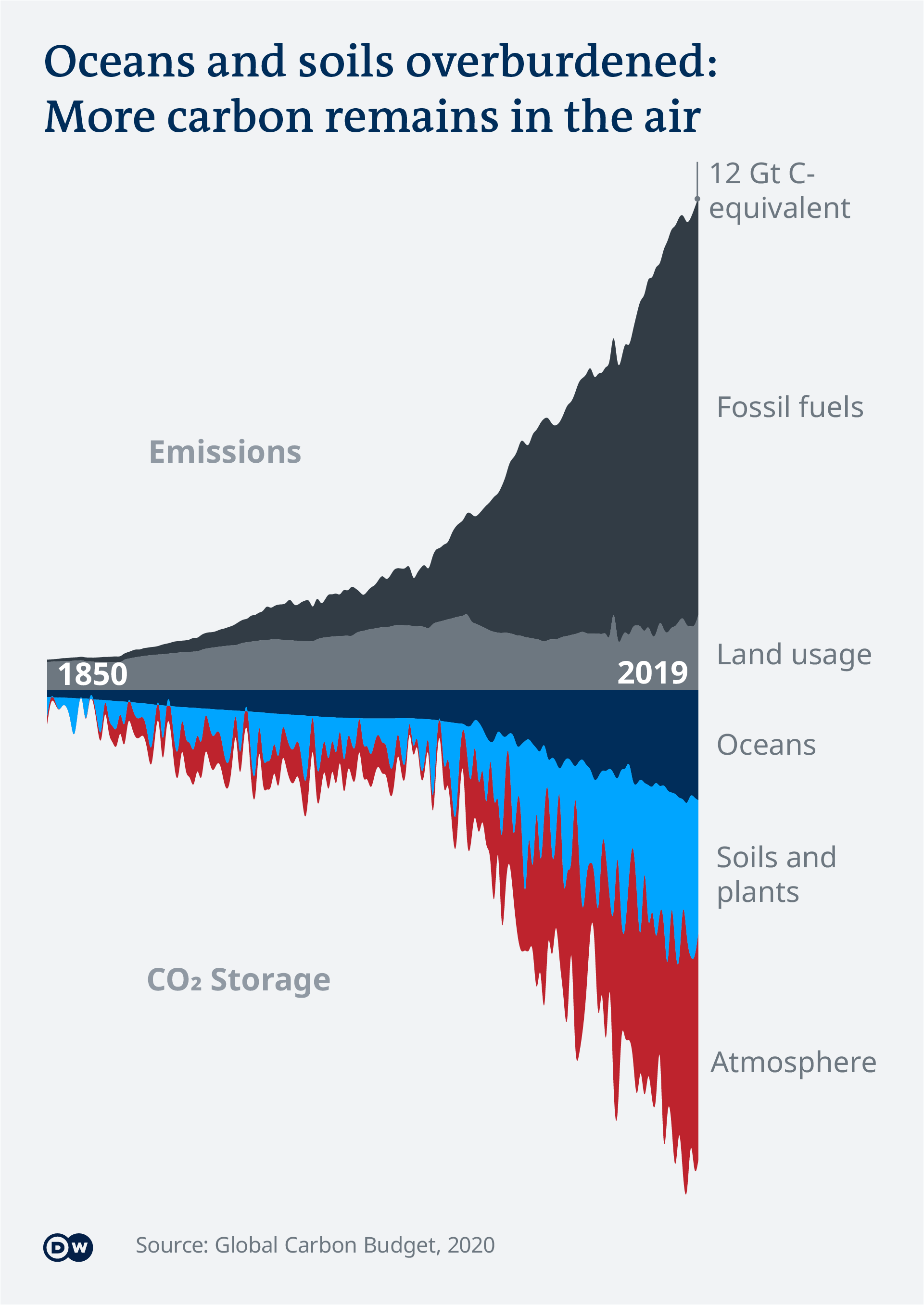 However, critics point out that, at the beginning of this year, a review of public filings by climate news and data portal Bloomberg Green showed that the oil giant "excludes emissions generated from many of its refineries and petrochemical plants in its overall carbon disclosures." It goes on to say that ""including all such facilities might nearly double Aramco's self-reported carbon footprint."

In addition, only a few days before the latest announcement, Aramco had confirmed its plans to increase crude oil production from 12 million barrels a day to 13 million by 2027 — which is exactly  the opposite of what scientists and environmentalists request.

Aramco, however, still promises, in accordance with the new net-zero vision, to be carbon neutral by 2050.

And yet it is not the first time that the kingdom has pushed for more environmental sustainability. Previous initiatives were launched under King Salman bin Abdul-Aziz' predecessor, King Abdullah, some 10 years ago, including the creation of the King Abdullah City for Atomic and Renewable Energy, a leading energy institute.

"But back then, there were still different political blocs within the royal family, including hard-liners who said, 'no, we don't believe in climate change at all'," Zumbrägel told DW, adding that Abdullah's initiatives were discontinued when he died in 2015.

In contrast,today, a clear, hierarchical and close-knit network of central figures of the same family support the new climate initiatives.

"In other words, sustainability has now become a key issue for the royal family," Zumbrägel said.

And with Crown Prince Mohammed Bin Salman stepping into the ring of carbon-neutral competitors in the Middle East, illustrated by his attendance at the COP26 climate summit, push has also come to shove for the whole region, with Saudi Arabia competing with the United Arab Emirates to burnish their climate credentials. 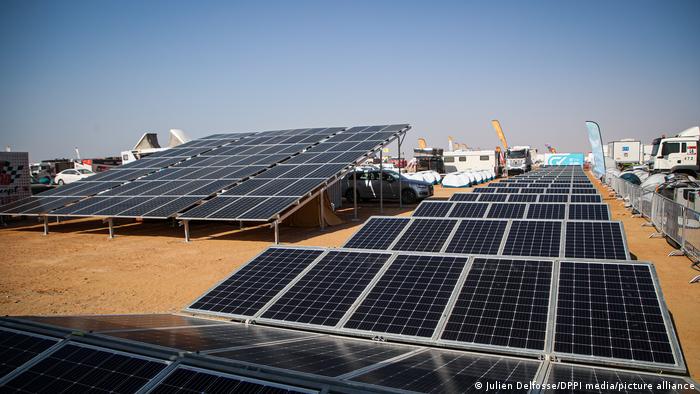 Saudi Arabia is building the world’s largest green hydrogen plant that runs on solar and wind energy in its new city Neom.

However, Saudi Arabia is under a lot of pressure at COP26 to show that it means business with its green initiatives.

"More has to be done. But it's going to require us to continue to focus on what China's not doing, what Russia's not doing and what Saudi Arabia is not doing," US president Joe Biden said at a press conference at the end of the G20 summit, which ended just before the COP26 summit started.

This upfront criticism came in parallel with leaked documents which were obtained by Greenpeace and first published by the BBC.

They contained a Saudi document addressed to the UN-linked Intergovernmental Panel on Climate Change (IPCC). Saudi requested that the UN scientists remove the conclusion that "the focus of decarbonization efforts in the energy systems sector needs to be on rapidly shifting to zero-carbon sources and actively phasing out fossil fuels." 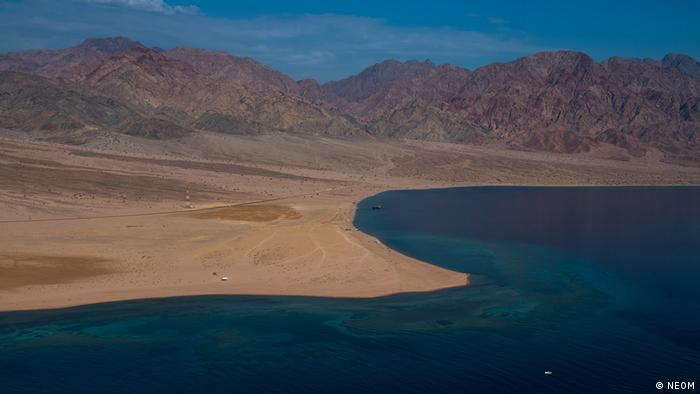 So far, Saudi Arabia hasn't commented on the leak. Still, there is no doubt that the kingdom will seek to diversify its energy sources, while continuing to export oil.

"None of this is a contradiction for the Saudis: You can export oil in the long term, but you do it all cleanly," Zumbrägel told DW.

He expects a flurry of ambitious new mega projects related to renewable energy in Saudi Arabia in the next few years.

One of them is increasing the efficiency and the amount of recycled water  , as Saudi Arabia obtains more than 70% of its water resources from desalination plants. Carbon capture is another way the Saudi leadership plans to deal with emissions from fossil fuel production.

The new sapling at Riyadh's park will certainly benefit from it, as one thing is for sure: Large swaths of recycled water will be needed to water the country's 450 million new trees.