Secessionists have defied Western objections and pressed ahead with self-rule referenda in Ukraine's eastern regions of Donetsk and Luhansk. Kyiv says the voting is a "farce" backed by Russia. 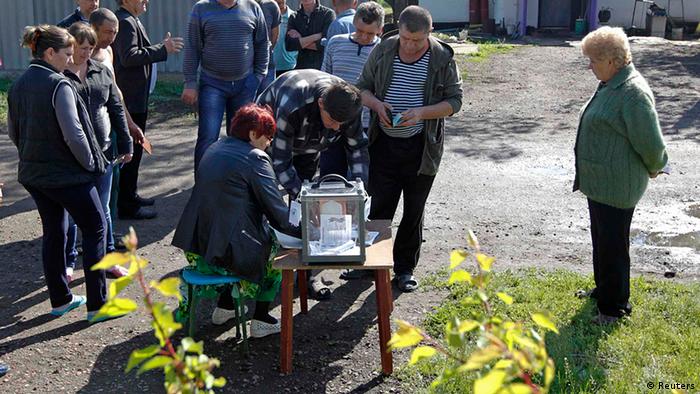 Pro-Russian separatists in Ukraine's eastern industrial regions said turnout for their referenda Sunday was "overwhelming." Queues formed in the eastern port city of Mariupol after clashes on Friday between rebels and Ukrainian troops left at least seven dead.

The Interfax news agency quoted the secessionists' electoral commission head Roman Lyagin as saying "voter turnout is not only high, but overwhelming."

That was rejected by Ukraine's Western-backed interim administration in Kyiv, which described the balloting as a "criminal farce." Presidential chief of staff Sergei Pashinsky said no voting was taking place in wide parts of eastern Ukraine - a sprawling region with 6.5 million inhabitants.

They were being asked to approve a declaration of so-called sovereign people's republics in the Donetsk and Luhansk regions.

Sunday's referenda went ahead despite appeals by Western powers for a Ukrainian presidential election on May 25 and a call by Russian President Vladimir Putin for the rebels to postpone their ballot.

Polling was due to close at 10 p.m. local time (1900 UTC). Officials in battle-scarred Mariupol said there were merely eight polling centers for half a million voters.

At several locations, ballot boxes were seen outdoors, among other places in Mariupol and at the village of Ternovoe (pictured) in the Luhansk region.

Polling lacked international monitors. Western correspondents said balloting was similar to the March referendum in Crimea, which was annexed by Russia days later.

Ballot papers used on Sunday were printed without safeguards against duplication and voter registration was patchy.

Eastern Ukrainian referenda organizers, quoted by the news agency AFP, said the poor security situation meant they had to concentrate balloting at a few district buildings rather than the normal array of schools and social clubs.

At one Donetsk polling station, lead organizer Andrei Mamontov said voting would not be marred by falsification.

In Mariupol, volunteer ballot worker Anna Ponomaryova told AFP that residents were also voting for self-rule in protest at Kyiv's recent military bid to regain control of the large city.

"We managed to hold it (the referendum) even though they tried to stop us," she said.

In the city of Slovyansk, where pro-Russian militants and Ukrainian government forces clashed heavily in recent weeks, more fighting had occurred on Friday night.

Ukraine and the West have accused Russia of fomenting the unrest in Ukraine's east. Moscow has rejected Ukraine's interim government.

The rebellion in the east began after weeklong mass protests in Kyiv led to the ousting in February of President Viktor Yanukoych, who fled to Russia.

Meeting on Saturday, German Chancellor Angela Merkel and French President Francois Hollande said they would back further EU sanctions against Russia if Ukraine's May 25 presidential failed to go ahead.

On Sunday, Hollande was due in Azerbaijan at the start of a tour of three former Soviet republics on Russia's periphery.

On Tuesday, he is due to visit Georgia, whose breakaway region of South Ossetia was invaded by Russian troops six years ago. Accompanying him will be a large French business delegation.

The International Red Cross says nine of its workers have been freed in the eastern Ukrainian city of Donetsk after pro-Russian rebels took them hostage. The eastern region referendum appears to be going ahead. (10.05.2014)