The lawyer of the Pakistani Christian accused of blasphemy told a German newspaper that Bibi and her husband had arrived in Canada. Other sources insist she is still in Pakistan. 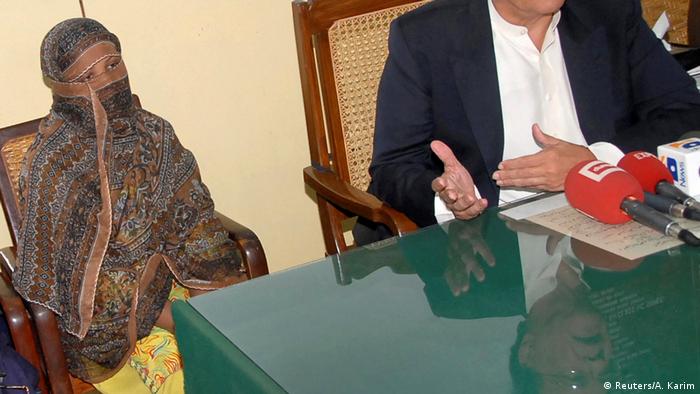 Asia Bibi, the Christian woman who spent eight years on death row on blasphemy charges in Pakistan, has arrived in Canada with her husband, her lawyer told German media early Friday.

The lawyer did not disclose any further details about Bibi's departure from Pakistan, citing security reasons.

However, the lawyer reportedly refused to confirm the statement after he was contacted by the German Catholic charity Missio hours later.

The Italian-language arm of Catholic charity Aid to the Church denied that Bibi had left Pakistan in a message on Twitter.

Previous reports said that Bibi could not leave her native country aboard a regular flight.

Shaan Taseer, the son of the former governor of Punjab, Salman Taseer, who was killed for supporting Bibi, told DW that Bibi is still in Pakistan.

Bibi was arrested in June 2009 after her neighbors complained she had insulted Prophet Muhammad. A year later, she was sentenced to death despite strong opposition from human rights groups.

The news comes just days after Pakistan's Supreme Court rejected an appeal against its decision to acquit her in October.

She had been living under the "protective custody" of Pakistani authorities since her release from prison in November.

Bibi's acquittal on October 31 had led to violent protests by hard-line Islamists.

The Tehreek-e-Labbaik party, which petitioned the Supreme Court to reverse its earlier ruling, had called for new rallies after the top court this week rejected its petition.

But the nationwide rallies the extremists had called for on Friday mostly fizzled out, with the exception of some violence in the southern port city of Karachi.

Frankfurter Allgemeine Zeitung reported that Bibi's lawyer Saif-ul-Malook was still in Pakistan. He had returned to the country shortly before the final Supreme Court hearing after spending months abroad due to death threats.

"I'm in my apartment, I'm not going to my office," he told the newspaper.

Will 2019 be a better year for Pakistan's religious minorities? 2018 offered some hope, as the country's top court released Asia Bibi, a blasphemy-accused Christian woman, from jail. Should we keep our hopes high? (24.12.2018)