Concern mounts as thousands detained in Bangladesh crackdown on Islamists

A crackdown on Islamist militants has nabbed some 150 suspects, but thousands of people have been swept up in the raids. The opposition accused the government of using terrorism as a pretext to tighten its control. 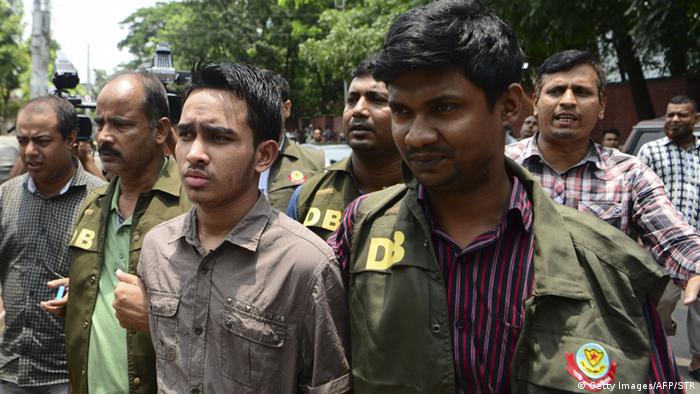 Bangladeshi authorities arrested nearly 11,000 people in the past week as part of a sweeping crackdown on suspected Islamist militants behind a spate of attacks, as rights groups voice concern over arbitrary arrests and the deterioration of rule of law.

Prime Minister Sheikh Hasina vowed last week to crush "each and every killer" behind a wave of brutal Islamist "machete attacks" that have killed nearly 30 secular writers, Hindus, gay activists and Westerners since the beginning of last year.

In the past week alone,a Hindu priest, Hindu monastery worker, a Hindu teacher and Christian shopkeeper were hacked to death or wounded with machetes, while the Muslim wife of a top counter-terrorism police officer was also killed. The killing of the counter-terrorism official's wife is believed to be the spark that triggered the wrath of authorities.

Al-Qaeda's affiliate in the subcontinent Ansar al-Islam and the so-called "Islamic State" have claimed credit for numerous attacks, but authorities deny the terror groups have a presence in the country. Police instead blamed home-grown outfits such as Jamaat-ul-Mujahideen and Ansarullah Bangla Team.

Only a fraction of those caught up in the recent crackdown are suspected militants, police have conceded, putting the number of Islamic militant arrests at some 150.

The sweeping nature of the crackdown has spurred concern over arbitrary arrests.

New York-based Human Rights Watch (HRW) on Friday said police appeared to be arbitrarily arresting young men in neighborhoods suspected of harboring militants. In at least one case, HRW said, a youth was beaten up while in custody and threatened with being labeled a suspected fundamentalist unless he paid a bribe.

"The mass arrest of thousands upon thousands within the course of a few days is a familiar scene in Bangladesh, but does little to inspire confidence either that these ghastly killings will stop or that due process will be followed," said Brad Adams, HRW's Asia director.

"The authorities need to conduct focused investigations in order to find those responsible for planning and carrying out the wave of killings that has so outraged the world," he added.

"What we are seeing now is how the Sheikh Hasina regime has lost control over the agenda of tackling extremism," the London-based spokesman for the BNP, Humaiun Kobir, said earlier this week.

"It has concentrated for far too long on crushing the political opposition, and using terrorism as an excuse," Kobir added.

Hasina's government accuses the two Islamist rooted parties of orchestrating the violence to destabilize the country.