Competitions can be tickets to stardom for young musicians | Culture | Arts, music and lifestyle reporting from Germany | DW | 26.09.2009

Competitions can be tickets to stardom for young musicians

Artistic competitions may seem like an oxymoron. But for musicians aiming to be stars, they're the key to a successful career. DW follows young hopefuls as they brave the jury that could decide their future. 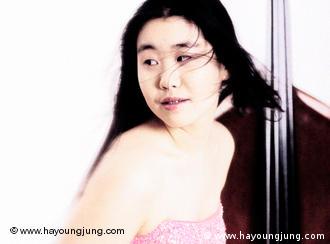 Her aspirations to be a soloist set Jung apart

Johannes Brahms' father, in his time the foremost double bassist in Hamburg, is said to have pointed out that a correct note on his instrument is a crapshoot - at best. That rings true if you listen to bass players struggle, but one could ask why that is. After all, they have so much more space to hit the right note - inches more, seemingly - than violinists.

One person who gave an answer to the question is a first-round participant at the ARD International Music Competition, which wrapped up recently in Munich.

"We don't have more space for the right note. The right note is just as precise a point on the fingerboard as on the violin," said 19-year-old Ha-Young Jung, who was born and raised in Seoul and is now based in London. She was one of the 40 bassists who were accepted and made the trip to Munich for the ARD competition. 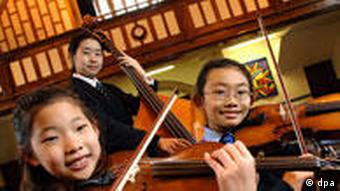 "But we have two inches of wrong note between each right one. And we have to move our arms inches, not our fingers millimeters, to get from one note to the next," she pointed out.

That's good to keep in mind when listening to a first round of double bassists in any competition. Right notes are indeed exceptions to a cacophonous rule.

Jung said she was excited to participate in the ARD competition because it involved learning so much. "I think competitions are very good because we have to play and prepare for so many pieces in such a short period," she said.

She said she thought focusing on competitions too much, however, could be limiting. "It can get a little bit tense when you think about how to play without making mistakes or that one needs to be perfect all the time."

She tries not to worry about what judges think too much. "At the end of the day, music is so personal that I can't possibly know what it is the jury really likes. So I do what I like."

Then, with a glance at her regular Russian pianist, who fulfils a role somewhere between ersatz-mother and drillmaster, she quipped, "or what my accompanist wants."

The bass as solo instrument 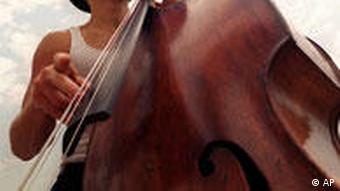 Bassists were once mostly men; that is changing

"Many people don't consider the bass a solo instrument," she pointed out. "Its register is low, its sound difficult to project when you play with an orchestra. But I think it depends on how a player brings out the qualities of the instrument, rather than on the instrument itself."

Playing in an orchestra, while enjoyable, is also challenging. "When I play in an orchestra for a few days, I get very, very ill, because I just give everything," she said.

But then she waxed philosophical. "There's something about the very big picture that's part of playing in an orchestra and I enjoy it very much - and some aspects are even more demanding than playing solo."

In the competition in Munich, Jung played - among others - Bottesini's “Elegy and Tarantella." Every phrase made musical sense and her unbridled energy made it seem like someone had opened the windows in the windowless studio.

"There isn't a lot of repertoire for the bass anyway, compared to other instruments," she said. "But Bottesini is one of the few composers who really tried to expand the repertoire and I think he's very musical, very much fun to play, and fun to listen to."

Still, she didn't advance in the competition. Following her disappointment and departure from Munich, Jung was upbeat again. She was looking forward to a recital at Wigmore Hall in London with famous violinist Sarah Chang.

Before she left, there was question one question she still had to answer: Did she ever feel stuck with the double bass and so little music to be grateful for?

"Well, there are many ways to look at this. For me, I don't envy pianists or violinists ... I don't envy the particular repertoire they have, even if it is so much bigger and, well, better. I'm happy playing bass."

Then, glancing at her colleagues hauling basses about, "what I envy is the size of other instruments!"

Watch for more on promising young musicians at they participate in other competitions.

Artistic competitions may seem like an oxymoron. But for musicians aiming to be the next Lang Lang, they're the key to a successful career. DW follows young hopefuls as they brave the jury that could decide their future. (10.09.2009)

Baritone Thomas Quastoff is internationally recognized as one of Germany's most accomplished musicians. Despite a severe thalidomide-related physical handicap, the singer has begun taking opera roles in recent years. (28.03.2009)