The area of land being used to grow coca in Colombia has increased by 17 percent, according to a UN report. A peace deal with the FARC rebel group was expected to reduce cocaine production, but the opposite appears true. 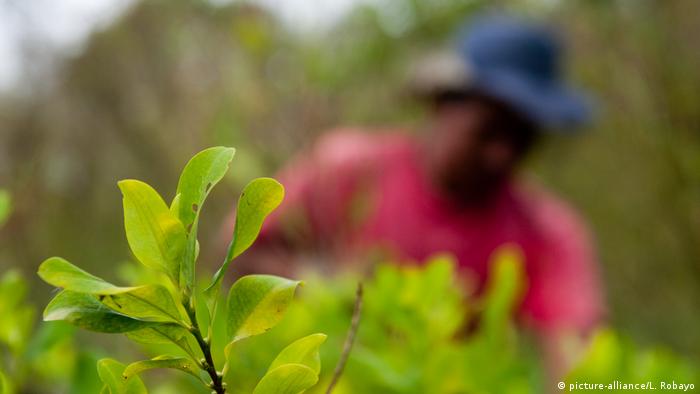 The overall area covered by illegal coca plantations in Colombia increased by 17 percent last year when compared with 2016, the United Nations Office on Drugs and Crime (ONODC) has said.

The amount of land used to grow coca leaves — the primary raw ingredient of cocaine — would have been enough to produce almost 1,400 metric tons of the drug last year.

The bulk of coca farming was taking place in the southern part of Colombia, the report found. Cultivation of coca in Narino department, on the border with Ecuador, surpassed 45,735 hectares (around 113,000 acres). That figure meant the region alone had more farmland dedicated to coca than the whole of Peru, the world's second-largest supplier of cocaine after Colombia.

The findings were based on satellite imagery, as well as on-the-ground verification, and echo similar findings by the US government.

While Bogota is a key ally in Washington's efforts to stem the supply of drugs into the United States, the boom in coca production has begun to test US-Colombian relations. US President Donald Trump recently threatened to decertify Colombia as a partner in the war on drugs.

Read more: Colombia's peace deal: Where is the peace?

Speaking in response to the report on Wednesday, Colombian President Ivan Duque acknowledged the growth in illicit crop farming and said action would be taken.

"The decision of the government is to have a comprehensive policy, which will be presented in the coming days and which will include the strengthening of our capabilities to intervene from the air, at sea and on land," Duque said after a meeting with his top military command.

"Our goal is to show dramatic results in the next four years."

Officials have said they want to resume aerial fumigation of coca plantations with the herbicide glyphosate. That practice was ended by former President Juan Manuel Santos after a report linking glyphosate with cancer, amid peace talks with the leftist FARC rebels, who were heavily embroiled in the drugs trade.

The 2016 peace deal was expected to reduce drug production, but it appears the opposite has happened. Drug traffickers have taken over land once occupied by FARC, and some peasants are believed to have started growing coca in the hope of receiving compensation if they replace it with other crops.

Seuxis Hernandez Solarte, a key FARC rebel group negotiator in the Colombian peace agreement of 2016, was set to become a member of the country's parliament. Now the former guerrilla member may be extradited to the US. (10.04.2018)

Colombian guerrilla Timochenko has swapped combat fatigues for grey blazers to run for president. But are voters ready to accept him and his Revolutionary Armed Forces (FARC)? Manuel Rueda reports from Bogota. (29.01.2018)

Topics this week: For many coca Farmers in Colombia, it is far from simple to stop producing coca for drugs// Why protecting wildlife clashes with livelihoods of fishermen in Odisha, India//  Netflix film sparks protests in Egypt//  How artists in Turkey censor themselves because they face backlash for their art