Seuxis Hernandez Solarte, a key FARC rebel group negotiator in the Colombian peace agreement of 2016, was set to become a member of the country's parliament. Now the former guerrilla member may be extradited to the US. 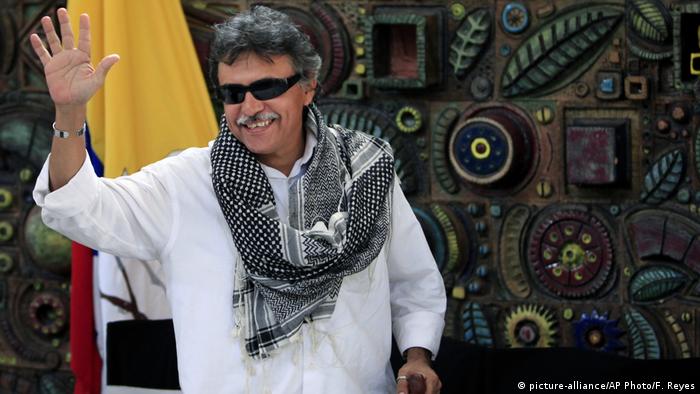 Colombian authorities arrested ex-FARC guerrilla leader Seuxis Hernandez Solarte, known by his alias "Jesus Santrich," on Monday in Bogota, after he was indicted for drug trafficking by a court in the United States.

Santrich was one of FARC's key participants in the peace negotiations that eventually led to the peace agreement with the Colombian government in 2016. He had been selected to serve in the Colombian congress due to a stipulation in the peace accord that granted 10 parliamentary seats to the newly formed FARC political party.

A US grand jury in the Southern District of New York indicted Santrich for conspiracy, along with three others, to smuggle several tons of cocaine into the US with a street value of $320 million (€259 million). Attorney General Nestor Humberto Martinez said that evidence in the case indicates that Santrich committed the crimes after the 2016 peace accord was signed.

The accord allows for rebels to be spared from prosecution if they lay down their arms and confess their war crimes to special peace tribunals. But it does not protect them from prosecution for crimes committed after the accord was signed.

Colombian president Juan Manuel Santos led a press conference on Monday, along with the attorney general, where he confirmed the arrest and said there was "convincing proof" of the crimes allegedly committed by the former guerrilla leader.

"The construction of peace requires the absolute commitment and respect for the law and the accords," Santos said. "This is what the Colombian people demand. In this respect, there can't be any room for tolerance or weakness."

Santos said that if "irrefutable proof" exists that the crime was committed after the signing of the 2016 peace accord, his government would concede the extradition to the US.

"My hand will not tremble in authorizing it," the Colombian president added.

FARC ex-guerrilla member Ivan Marquez, who now also holds a leadership spot in the political movement, confirmed the arrest and condemned it. Marquez said the arrest marked the "worst moment" that the peace agreement was going through.

FARC political party member Victoria Sandino joined Marquez in denouncing the arrest, saying it was "sabotage" and a "set-up" for those who have committed to the peace agreement.

Colombia's peace accord was celebrated as a landmark achievement, as it sought to end Latin America's longest-running conflict. But it also was rejected by segments of Colombian society that were not ready to accept the FARC political movement and wanted the former guerrillas to be held accountable for the crimes they committed.