Colombia is set to succeed in its fight against drug trafficking, following the FARC peace deal. But coca-growing farmers worry they will be left without any means of support. Mira Galanova reports. 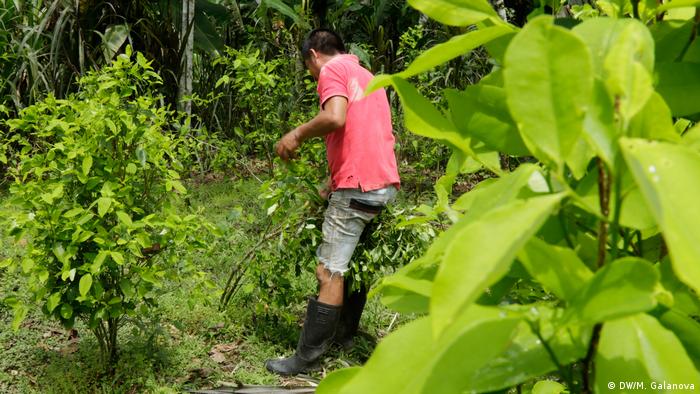 Lucia is on edge every time she carries her crop of coca leaves to buyers in Colombia's Putumayo department. "I pray to God that nobody stops me. We don't mean any harm."

Police presence has grown since the left-wing FARC rebels left the dense jungle along the borders with Ecuador following the peace agreement with the government last November.

Lucia, who declined to give her real name, cultivates the raw material for cocaine. "The risk is great, but our needs are greater. If we don't do this, we would have to go stealing," she told DW.

It is estimated that some 72,000 Colombian families rely on illicit crops to make their living. They say they do not have any other option.

The coca-growing regions have suffered chronic state neglect as well as the worst of the country's five decade-long armed conflict. There is a lack of good roads, running water, electrification or commercialization chain - an infrastructure necessary to make legal business viable. Agricultural produce often rots on its way to the market.

Coca, on the other hand, can be moved around easily - without risk of damage. 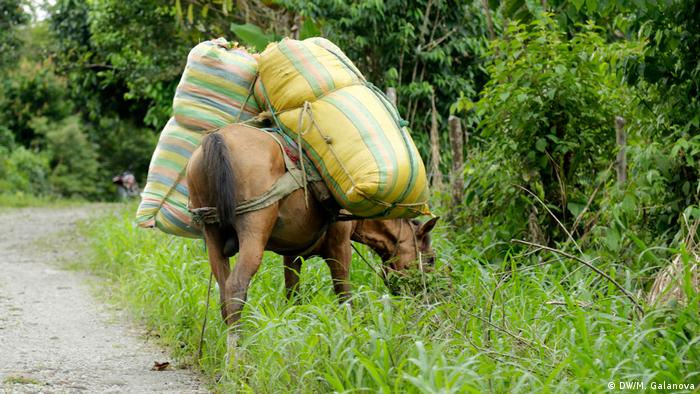 Coca leaf is easy and cheap to transport to buyers

Getting farmers on board

As part of the peace deal with the FARC, the government pledged to rid Colombia of coca cultivation, seeking to get farmers on board.

The situation is more opportune than ever. The drugs trade in some coca-growing regions is facing a crisis. With the withdrawal of the guerrillas, farmers have lost the biggest buyer. "A gram of coca paste has fallen from 1,700 pesos (approx. 5 euro cents) to 1,000," says Ramiro Palma, a community leader in San Miguel, Putumayo. "Some people have even stopped harvesting."

The majority of small coca-growers are ready to embrace a government substitution plan. But they also feel uneasy. Previous programs failed to have an impact and left many people destitute.

Margory lives in a hamlet that destroyed all its coca plants a few years ago in the substitution program Guardabosque. To make ends meet, she now goes to help harvest coca in another region, far away from her two children.

"Regular crops yield low profits. Bananas and cassava sell cheap so we don't earn enough to survive. People say that cacao is rewarding, but only for those who have large quantities," she says. "No other crop can replace coca."

Past substitution programs ignored the need to improve local infrastructure. The money meant to help coca-growers with alternative projects "filled the pockets of cooperatives from other parts of the country. They charged double or triple the real value of the farming products they distributed," says Fernando Palacios, the mayor of La Hormiga town in Putumayo. "People were left without proper technical assistance. The crops they sowed failed because they were not apt for the soil."

The worst was the US-sponsored Plan Colombia. It intensified fumigation, which took its toll on legal crops and the health of locals.

Lucia's farm did not grow a single coca plant when a herbicide spraying plane passed over it. "We had sowed cacao and it all dried up. We were left with debts instead of profit. There was no other option than to return to growing coca," she says.

Despite two decades of US eradication efforts and billions of dollars spent on it, coca production surged to record levels in 2016, according to a White House report. The area cultivated with coca is now estimated to stretch across 188,000 hectares. Washing other people's clothes is one of few possibilities to earn money in a legal way in San Miguel, Putumayo

There are hopes that the government has learnt from past failures. The current National Program for Replacing Crops for Illicit Use (PNIS) offers the farmers technical assistance and a basic income during the first 20 months to help them transition from coca cultivation to legal businesses. The incentives amount to 36 million pesos (11,000 euros) per family, distributed over a period of two years.

The efforts go beyond pure crop substitution. "The PNIS is a part of the rural reform strategy, which involves the development of public property, health service and education," says Eduardo Diaz, the director of Colombia's Agency for the Substitution of Illicit Crops. "We aspire to have as many coca-growers as possible, hopefully 100 percent, join the voluntary substitution."

However, many farmers are skeptical.

"In Guardabosque, we were promised good roads and electricity. We kept our part of the deal, but the government didn't," says Margory.

Diaz says the government is committed to making the program work. "This is not just about the crop substitution. Peace is at stake. If we fail, these territories will be quickly taken over by armed actors who see in these crops an opportunity to enrich themselves," he says. Cacao is a promising alternative to coca in Putumayo

In an attempt to stop it, coca-growers in Tumaco, a municipality with the highest coca production in Colombia, blocked roads in Narino province for weeks earlier this year. The protests turned violent, with casualties on the side of the farmers as well as security forces.

The government says the eradication targets only big plantations owned by drug cartels. "These people have no interest in reaching an agreement," says Diaz.

The farmers say the government is violating the peace agreement with the FARC as it focuses on forced eradication rather than voluntary substitution. They insist that they are not defending coca as such, they just want guarantees that they will be able to survive without it.

Arguably, narco-traffickers were behind the protests in Tumaco. But the forced eradication might have united organized crime groups and small coca-growers around a common cause.

"If the government gives us just a little push, we are going to find our way. We need something to start with," says Margory.