The Nobel Peace Prize has been awarded to Colombian President Juan Manuel Santos for his role in the peace process with FARC rebels. He dedicated the prize to the victims of his country's civil war. 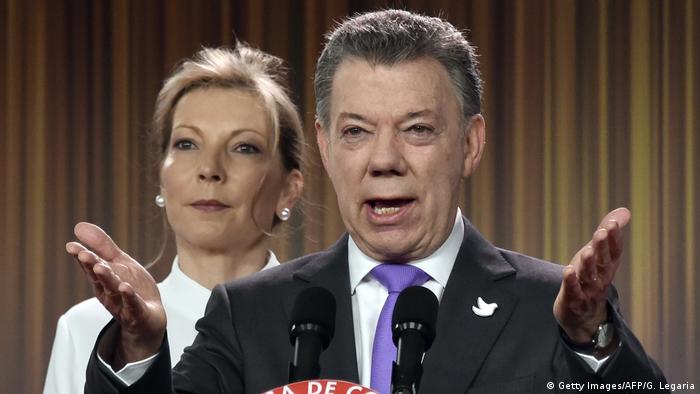 On Friday, the Nobel Peace Prize for 2016 was awarded to Colombian President Juan Manuel Santos.

"The Norwegian Nobel Committee wishes to encourage all those who are striving to achieve peace, reconciliation and justice in Colombia," the committee announced, noting that Colombia's conflict was "one of the longest civil wars of all time and the sole remaining armed conflict in the Americas."

Santos did not immediately hear about his award, announced in the early hours of the morning for him in Bogota, but later dedicated it to victims of the civil war.

"I am infinitely and whole-heartedly grateful for this honor," Santos said in a televised address alongside his wife. "I receive it not in my own name, but in the name of all Colombians, especially the millions of victims of this conflict that we have suffered for more than 50 years."

The deal brokered over years of talks between Santos and his FARC counterpart, Rodrigo "Timochenko" Londono Echeverri, suffered a major setback on Sunday, when Colombians narrowly rejected it at a referendum. Now both groups are scrambling to rescue the accord. A ceasefire stands, but Santos, who has staked his legacy on making peace, warned that Colombia finds itself in a "very dangerous limbo."

"I invite everyone to join our strength, our minds and our hearts in this great national endeavor so that we can win the most important prize of all: peace in Colombia," Santos said on Friday.

'No turning back from peace'

FARC commander Timochenko congratulated the president on Twitter, saying he continued to hope for "peace in the streets."

"The only prize we aspire to is peace with social justice for Colombia, without [right-wing] paramilitary groups, without retaliation [against leftist rebels] or lies," he wrote.

The FARC leader was notably not named as a co-recipient of the Nobel prize, a decision which has drawn some criticism. Ingrid Betancourt, a former hostage of the rebel group, told French broadcaster I-Tele that she believed the award should have been shared with the rebel group.

However, she also said it showed that "there was no turning back from peace," and praised Santos for "giving the next generation the possibility of living in a different country."

Norwegian Nobel Committee Chairwoman Kaci Kullman Five said the award should not be seen as a "rebuke" of the referendum which rejected the peace deal. She also noted that the committee's decision to award Santos was "not a belitlement to any of the other parties," noting that FARC was an important part of the peace process.

Colombian former president and leader of the "no" campaign against the peace deal, Alvaro Uribe, has also extended his congratulations to Santos on Friday.

"I congratulate President Santos for the Nobel," Uribe said on Twitter, expressing hope that it would lead to "changes" in the peace deal.

United Nations Secretary-General Ban Ki-moon called Santos' win "a timely message to all who have toiled so hard for peace" within Colombia, including the government, FARC negotiators, and other political entities seeking an end to the conflict.

"This award says to them: you have come too far to turn back now. The peace process should inspire our world," Ban, currently on a trip to Germany, said.

The European Union policy chief Federica Mogherini said the Nobel prize "recognizes the determination, the vision of the great man of peace," she said Friday during a visit to the Romanian capital, Bucharest. "The path towards peace can be fraught with obstacles, but peace is always possible for those who dream of it and work hard for it."

Spain's acting government also extended its congratulations to Santos, with Deputy Prime Minister Soraya Saenz de Santamaria said the award dually recognized "the forces of peace...and on the other hand, for the Colombian people and what they have lived through during this time."

Rigoberta Menchu, a Guatemalan indigenous rights activist who won the Nobel Peace Prize for her work, offered some advice to Santos following his win - don't lose hope. Although she won the Nobel in 1992, her country's three-decade civil war did not come to an end until 1996.

"Santos now has a lot to do to take Colombians down the path of peace," Menchu told Bogota's Blu Radio, adding that Santos can now count on broad international support for the peace process following his win.

A leader of Colombia's "no" campaign against peace with FARC has resigned from the Democratic Center party. Prosecutors opened an investigation after Juan Carlos Velez said "no" campaigners used "misleading" tactics. (07.10.2016)