As deadly unrest escalates in Colombia, the UN's Michelle Bachelet called on the country's government and the protesters to negotiate. 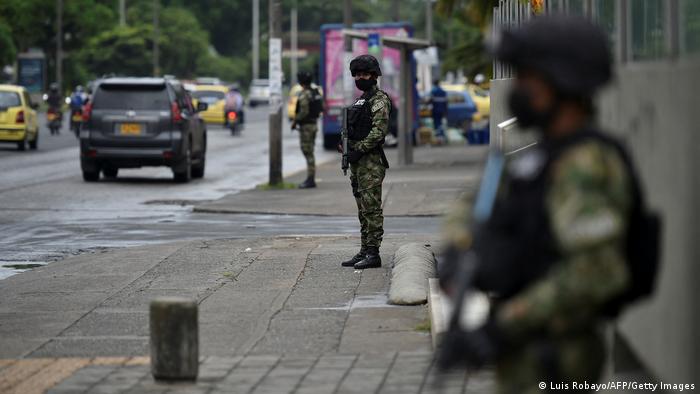 Protesters have blamed government forces for a brutal crackdown

The United Nations Human Rights office on Sunday called on the Colombian government and a national strike committee to "ensure respect for the life and dignity of all people." The appeal follows fresh clashes between security forces and anti-government protesters which prompted a military deployment in Colombia.

"I call for an end to all forms of violence, including vandalism, and for all sides to continue talking to each other," said the UN High Commissioner for Human Rights Michelle Bachelet.

Earlier, 17 ambassadors of EU countries to Colombia also called for talks to end the crisis.

"We support dialogue and negotiation as the only way to achieve a sustainable solution to the crisis," said Patricia Llombart, head of the EU delegation to Colombia.

A pre-agreement to further negotiations was reached last week, but strike organizers have since accused the government of deliberately stalling talks by not signing the deal.

The government wants protest leaders to denounce roadblocks as part of the pre-agreement, calling the point non-negotiable.

Bachelet's office cited reports from Cali that armed individuals, including an off-duty judicial police officer, had opened fire on demonstrators, journalists and bystanders. The policeman was beaten to death by a crowd.

Since May 28, 14 people died in the violence and 98 people were injured, 54 of them by firearms, according to the reports received by the UN rights office.

"It is essential that all those who are reportedly involved in causing injury or death, including state officials, are subject to prompt, effective, independent, impartial and transparent investigations and that those responsible are held accountable," Bachelet said.

AFP news agency quoted Cali security secretary Carlos Rojas as saying the scenes in the south of Cali were "almost an urban war."

What are Colombians protesting?

Protests erupted last month across the country over poverty, joblessness, inequality and the fallout from the coronavirus pandemic.

The rallies were initially prompted by a proposed tax increase Colombians said would make them even poorer on top of financial losses caused by the pandemic.

The largely peaceful protests have developed into a mass movement, and then escalated into brutal and often deadly street fighting.

Why Colombian protesters are taking to the streets

The ongoing protests reveal how economically vulnerable most of Colombia's population is. But the grievances run much deeper than that.

New deaths were reported in Colombia as nationwide unrest entered its second month. President Ivan Duque is deploying more than 7,000 personnel to the city of Cali, the hub of the protest movement.

Two independent UN human rights experts called on Sweden to scrap a planned iron ore mine. They said the mine would create a significant amount of toxic waste on land used by Sweden's indigenous Sami people.

Colombian immigration authorities expelled a German activist who documented anti-government protests. She said she was the victim of an attack last week, which Colombian police dispute.