The government has said it would "analyze" a document presented by protest leaders. Demands include an end to violence against demonstrators by police and security forces, as well as to sexual violence against women. 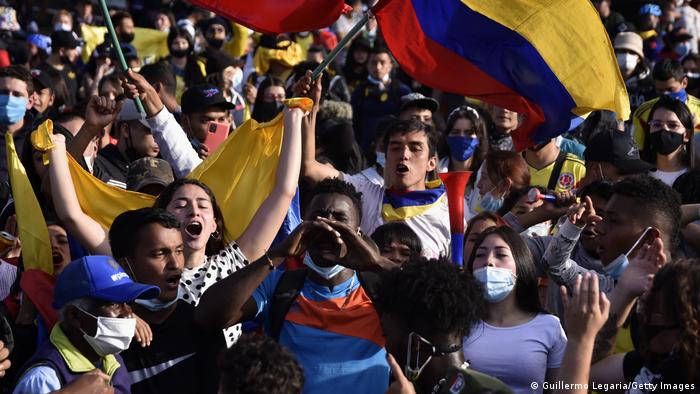 At least 50 people have died since the protests began, according to activists

Colombia's government has agreed to assess demonstrators' demands for the right to mobilize, after more than two weeks of violent protests against President Ivan Duque.

National strike leaders, unions, university students and other social movements who are part of the so-called National Strike Committee presented a list of demands to the government over the weekend.

The committee was expected to meet with government representatives again on Monday afternoon.

As the demands were presented, thousands took to the streets once again for mostly peaceful protests in the capital Bogota and other cities.

The committee called for an end to military deployments to demonstrations and the use of firearms by police, as well as measures to end sexual violence against women by security forces.

The protest leaders are also demanding the inclusion of the United Nations and church representatives in negotiations with the government, and that Duque recognize his "responsibility" for aggression during protests.

Presidential adviser Miguel Ceballos said he had received the committee's document demanding "guarantees for the exercise of protest," and added that it "must be analyzed by the government."

It marked the second time government spokesmen and protest leaders met in Bogota since protests erupted on April 28.

Duque, who did not attend the meeting with the protesters, said he recognized the right to peaceful protest but demanded an end to road blockades, which he described as "aggressive acts" that hinder the supply of food and medicines.

"Yes to the construction of agreements […] but not with a de facto way in the middle, not with the threat to mobility […] affecting health and welfare," Duque declared.

International human rights organizations and countries including the United States have denounced abuses by Colombian police and security forces against protesters.

According to the committee, at least 50 people have died, 578 have been injured, 524 have disappeared and 21 women have suffered sexual violence since the protests began.

The country's Defense Ministry says around 1,700 people have been injured so far, including more than 900 security personnel.

Why are Colombians protesting?

The protests were initially against a controversial tax reform that has since been withdrawn due to mass protests.

Notably, Duque had said the government would increase value-added tax (VAT) on goods and services, and expand the taxpayer base.

The economy minister and foreign minister have both resigned as a result of the protests.

Duque previously said tax increases were necessary to overcome the economic crisis generated by the coronavirus pandemic. He introduced the bill on April 15 in the hopes of financing public spending and revamping the economy.

The Latin American country has seen its worst recession in half a century, with its GDP dropping 6.8% in 2020.

Protesters said the tax changes, including an expansion of income tax, would make them poorer amid the pandemic. The demonstrations have since expanded to other issues, such as a planned health care reform and Colombia's ongoing peace process.

Strike leaders have called for fresh protests for Wednesday.

Iran's president has said the death of a young woman in police custody must be "steadfastly" investigated. Mahsa Amini's death set off a wave of anti-government protests in Iran, with state TV reporting a death toll of 17, including five members of security forces.