New deaths were reported in Colombia as nationwide unrest entered its second month. President Ivan Duque is deploying more than 7,000 personnel to the city of Cali, the hub of the protest movement. 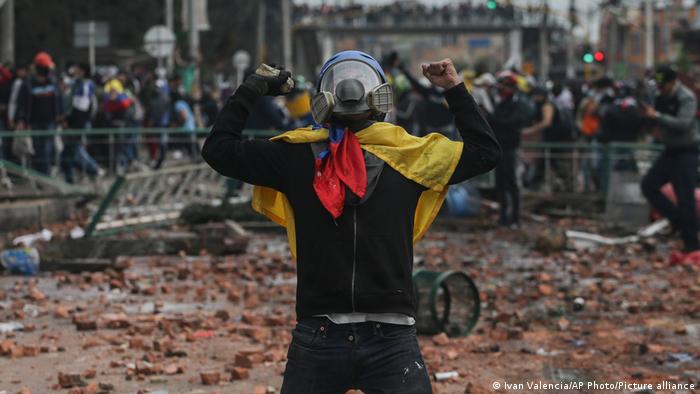 Colombian President Ivan Duque vowed to deploy the "maximum" number of military personnel in the western province of Valle del Cauca after several people died in protests in the region on Friday.

The deaths occurred in and around the city of Cali as tens of thousands demonstrated across the country in the latest round of protests  that first emerged on April 28. At least 49 people are now thought to have died during the weeks of unrest. 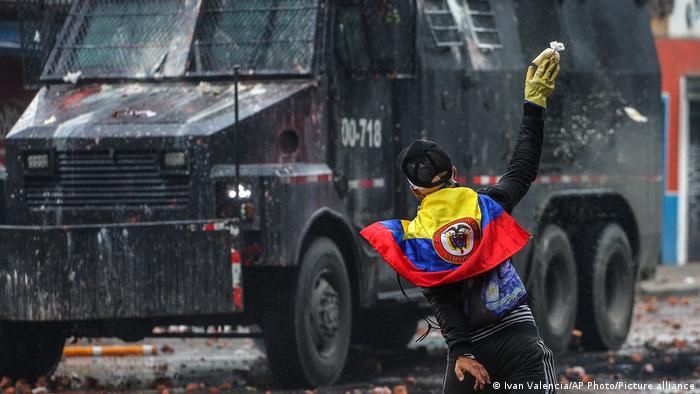 Talks to ease unrest break down

The unrest was sparked over tax reform but the protests have since expanded to include wide-ranging demands.

Talks between the Colombian government and the protest leaders, including union leaders who have formed a national strike committee, have stalled. Protest leaders have also been heavily critical of the violent crackdown on civilians.

"From tonight begins the maximum deployment of military assistance to the national police in Cali and the province of Valle," Duque said in a televised message.

He said that more than 7,000 personnel, including members of the navy, would be sent to alleviate road blockades.

Valle del Cauca Governor Clara Luz Roldan earlier declared a curfew, which would start in the province from 7:00 p.m.

Several deaths were reported in the city of Cali on Friday, although their exact number was not immediately clear. The western city is a flash point in the protests, and serves as a center of the protest movement.

Mayor Jorge Ivan Ospina urged "not give in to the temptation of violence and death."

At least three deaths occurred in clashes between "those blocking and those trying to get through" a barricade, Ospina added.

Local media reported at least one more death on the road between Cali and the town of Candelaria.

The United Nations human rights office in Colombia on Saturday said it was  "extremely concerned" about the current situation in the country.

It said it had reports of several dead and injured as well as one person missing in relation to the unrest and called for dialogue.

Human Rights Watch, which puts the death toll higher than the official one, at 63, said the situation in the city of 2.2 million was "very serious."

"Colombia can't mourn any more deaths," he said in a tweet.

Football in Colombia: Pitch of conflict

Protests have picked up in Colombia over social inequality and police violence. Football has become a symbol of the crisis, which has led to Colombia losing the right to cohost the Copa America.