Coinbase to be listed on Nasdaq in cryptocurrency milestone

The biggest US virtual currency exchange will be listed, following record Bitcoin highs. The listing marks a turning point for cryptocurrency, once considered an obscure investment prospect. 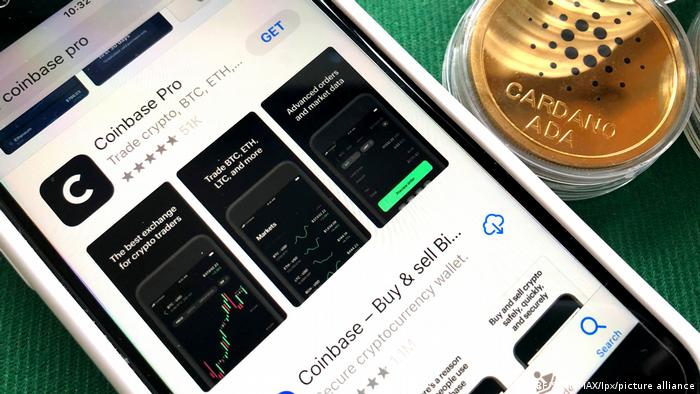 Coinbase was recently charged with market manipulation and misleading information

Coinbase, the biggest US cryptocurrency exchange, is set to list on the Nasdaq on Wednesday, marking a milestone in the economic journey of virtual currencies.

The listing is the biggest yet of a cryptocurrency company, with the San Francisco-based firm saying last month that private market transactions made the company valued at around $68 billion (€57 billion) this year, versus $5.8 billion in September.

On Tuesday, the Nasdaq set a reference price for the company, which will be listed under the symbol COIN, at $250 a share. Taking into account shares in circulation, stock options and restricted shares, Coinbase's overall valuation will begin at $65.3 billion. Nearly 115 million Coinbase shares will be put on the market to start.

A shift to the mainstream

The move represents the latest breakthrough for acceptance of cryptocurrencies, an asset class that only a few years ago had been shunned by mainstream finance.

Bitcoin, the biggest cryptocurrency, hit a record high of over $63,000 on Tuesday. The currency has more than doubled this year as large investors from Goldman Sachs to Morgan Stanley to Tesla have warmed up to the asset.

The high figures for the Coinbase listing make it the biggest new US stock market entrant since Uber in 2019. Coinbase chose a direct listing, which does not allow it to raise new funds, but offers current shareholders — founders, employees and historical investors — the choice to sell their stock on the market.

Spotify, Slack, Palantir and Roblox have also used this method for their Wall Street start.

Despite the listing, however, experts still question the long-term sustainability of the market. "We think there is a lot of frenzy and exuberance in everything that looks like crypto," Olivier Marciot, a portfolio manager at Unigestion, which oversees assets worth $22.6 billion, told Reuters.

"Hedge funds and retail will probably be the early birds in these new stocks — probably buying into them pretty heavily — which shouldn't be a clear indication of how they will be in the longer term."

Before its notable rise in recent months, Bitcoin had experienced setbacks, particularly in 2018 when it kept falling. Some also are drawing attention to the distrust of lawmakers in several countries who are concerned about cryptocurrencies being used for illicit purposes.

Coinbase was also recently charged by the US Commodity Futures Trading Commission (CFTC) for "reporting false, misleading, or inaccurate" information about cryptocurrencies and manipulating the market between 2015 and 2018.

Without admitting wrongdoing, Coinbase paid a $6.5 million fine. The fine forced the company to push back its Wall Street listing date.

As a result of the surge in popularity, Coinbase's revenue has increased almost tenfold in the course of a year, to $1.8 billion in the first quarter. Its profit increased 25-fold, between $730 to $800 million.

Bitcoin explained: How it works and what it is good for

The most prominent of cryptocurrencies, Bitcoin has seen wild swings in value lately, making retail investors wonder if its worth wagering their money on it. DW abstains from any advice, but explains how Bitcoin works.

Bitcoin's crash is part of a wider market reshuffling. And with inflation surging it may not bounce back any time soon, Susanna Streeter, senior analyst at Hargreaves Lansdown, told DW.