According to an observer group, the Russian military has been widely using cluster munitions in its attacks. These types of weapon have been condemned internationally as it hits civilians the hardest. 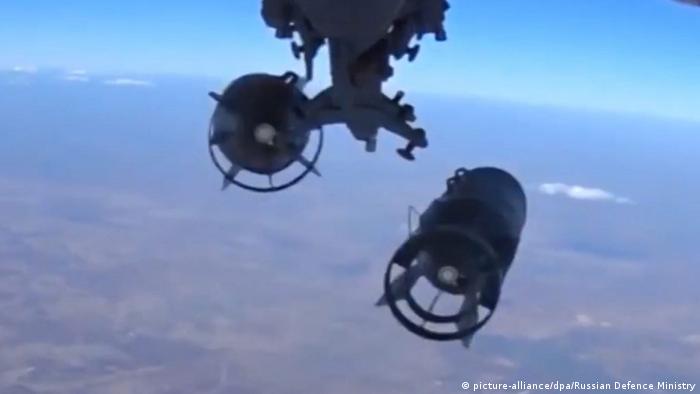 The Russian military campaign has left many victims. Since armed forces began their attacks in Syria in September, at least 2,132 lives have been claimed, according to the UK-based Syrian Observatory for Human Rights. No one can confirm these figures but in many regards, the group has provided more consistent information on Syria's long-running conflict than most.

The classification of victims is telling. According to the Observatory, 598 "Islamic State" fighters and 824 members of the Al-Nusra Front have been killed. But 710 civilians were killed as well - among them were 161 children.

The high numbers of civilian victims indirectly support accusations made by the human rights watchdog Amnesty International: the organization claims that the Russian army has been dropping internationally-banned cluster munitions and unguided bombs over densely populated regions. Amnesty speaks of "hundreds" of civilian victims. 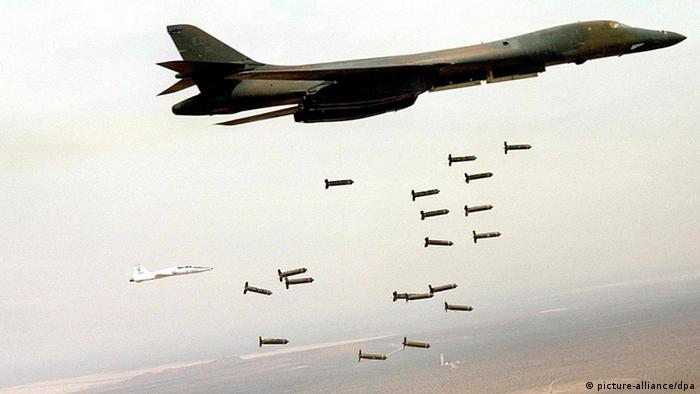 This shot's taken during an exercise, but the US and UK deployed cluster munitions in Iraq and Afghanistan

"Several of the Russian airstrikes intentionally targeted civilians or civilian buildings," says Philip Luther, who runs the Middle East branch of Amnesty International. "Civilian areas with no discernible military targets were bombed, even medical facilities. Dead and injured civilians were the result. Military attacks like that may be viewed as war crimes."

Cluster munitions have been banned in about 100 countries. Belgium was the first country to outlaw them in 2005, and two years later, Austria followed suit. In May 2008, the Convention on Cluster Munitions was adopted in Dublin. The convention has been ratified by 97 states and another 20 have signed it. Four large nations - the US, Russia, India and China - have not signed the treaty yet.

Cluster munitions have been banned as they are prone to indiscriminate results. They do not only destroy an identified target but everyone and everything in the vicinity. Cluster munitions can be found in aerial bombs, artillery shells and warheads in cruise missiles. They may carry various devices, such as explosive, fire and fragmentation bombs. Even armor-piercing bombs are deployed.

Up to 200 explosive devices per bomb

Thus, not only military targets but also civilians are struck. Usually, a container that can release up to 200 smaller explosives opens at a certain height in the air before it hits the ground. The explosive devices may strike a surface area between the size of several soccer pitches to a few hundred hectares. So-called collateral damage, i.e. unintentional injury or death of uninvolved civilians has been deliberately accepted as a potential loss.

The individual explosive devices are usually not very large. Nonetheless, they develop enormous destructive powers. Each device can lethally wound victims in a radius of up to 100 meters. Other bombs scatter potentially lethal splinters within 20 meters of impact and they still pose risks within 100 meters. 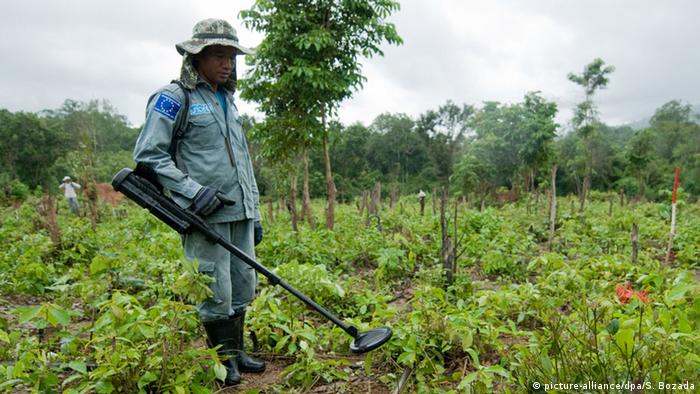 The job of finding and defusing such weapons, in this case in Laos, is as dificult as it is dangerous

Up to 40 percent of cluster munitions do not explode when they hit the ground. The unexploded bombs claim many victims during and after the war. They can still explode after years so their effect can be compared to landmines. However, the latest make of cluster munitions has an internal self-destruction mechanism which does drastically reduce the number of unexploded bombs.

In use since World War II

Cluster bombs were first used during World War II. The Germans and the Allied Forces both used them. In the following years and decades, cluster munitions have been used in almost every major armed conflict. In the 1960s and 1970s they were used in Cambodia and Vietnam; later in Western Sahara and in the Lebanese Civil War. Iraq dropped them in Iran and the military resorted to their use even in the first Gulf War, after the invasion of Kuwait. 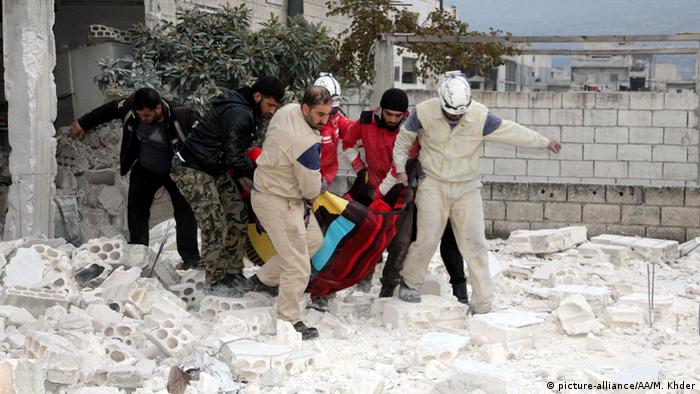 Rescue teams react after a Russian airstrike over Idlib, Syria

After the year 2000, cluster munition use continued, for instance in Afghanistan, Iraq, Lebanon and Sudan. Cluster bombs have also been used in the Ukraine conflict, the Syrian civil war and in Yemen.

The injuries sustained by cluster bombs are often very severe. The "Say No to Cluster Bombs" initiative has documented the case of a young Iraqi called Wahid. Shortly after the end of the second Gulf War, the then nine-year-old went for a walk with his brother when they suddenly noticed the shiny warhead of a cluster bomb. When Wahid lifted the container, it exploded. The boy was severely wounded. The initiative said, "His right hand was torn off and three fingers from his left were amputated. His whole body was punctured by metal splinters, especially one knee, his left foot, his upper body and head." In other cases, the internal organs of the victims were damaged.

Despite the Convention on Cluster Munitions, these weapons are still used. According to civil society watchdog groups, they have been used in the following countries since July 1, 2014: Libya, Syria, Sudan, Yemen and Ukraine. None of the named countries has signed the treaty. Most of the victims were in Syria: according to cluster munition monitoring groups, a total of 1,968 people suffered injuries from or were killed by cluster munitions between 2012 and 2014. The weapons have clearly been in use this entire year in Syria.

A human rights watchdog claims Russian airstrikes in Syria have indiscriminately hit civilians areas in what may amount to war crimes. The report also suggested Russia has used unguided bombs and cluster munitions. (23.12.2015)

Cluster bombs, which are intended to cause indiscriminate harm when detonated, were used in five countries this year. But the latest CMM report says progress is being made to eradicate the banned weapons. (03.09.2015)

Amnesty International has accused Russia of war crimes. In a report released on Monday, the human rights watchdog said it found evidence that attacks on the city of Kharkiv often involved cluster munitions which an international treaty banned in 2010.

Despite being outlawed, cluster bombs continue to maim and kill civilians 15.06.2022

Like landmines, widely-banned cluster munitions often pose a deadly threat years after being deployed. The victims are usually civilians, as was the case in a suspected Russian cluster bomb attack in northeast Ukraine.