Clinton on Merkel: The greatest leader in Europe

Former US secretary of state Hillary Clinton called Angela Merkel "the greatest leader in Europe" during a visit to Berlin. She also said that she admired how the chancellor handled the eurozone crisis. 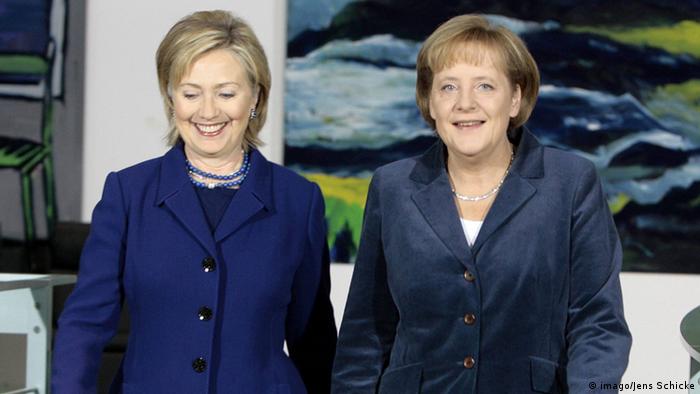 Clinton was in Berlin on Sunday to promote her new book "Hard Choices" in which she discusses her time as secretary of state.

At Berlin's Schiller Theater, Clinton also joked that she admires Merkel because of their shared preference for suit pants over skirts.

During her Berlin tour, Clinton additionally addressed other subjects, including whether or not America is ready for a female president.

"I think we are ready for a woman to break through the glass ceiling," Clinton said in an interview with the German newspaper Bild on Sunday.

She also said that she would decide whether to run for president in 2016 "at the end of this year or early next year."

Apart from praising Merkel, she also took the opportunity to say some less flattering things about Merkel's Russian counterpart. Clinton referred to Russian President Vladmir Putin as a "tough customer with a pretty thin skin."

"I believe he can be dangerous," she said in response to questions about the annexation of Ukraine.

She also agreed with a journalist who said that he sounded like a "Russian cowboy." "Yes, exactly," she said, "with or without a shirt."