Clinton hands personal email server over to US Justice Department 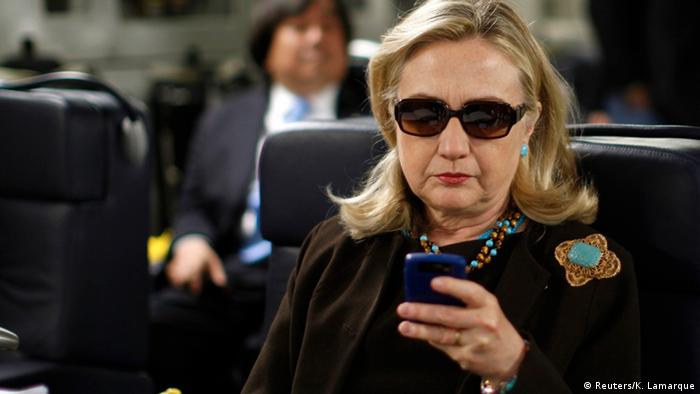 A spokesman for Hillary Clinton's presidential campaign announced that her personal email server, used while serving as secretary of state, would be given to the US Justice Department.

Clinton spokesman Nick Merrill said Tuesday that Clinton had also directed her team to turn over a thumb drive containing copies of emails sent to and from a personal email address via that server to the Justice Department.

Clinton's use of her private email account linked to a server in her New York home for her work as America's top diplomat had come to light in March and drew fire from political opponents who accused her of sidestepping transparency and record-keeping laws. Clinton had previously refused demands from Republican critics to turn over the server to a third party.

Clinton lawyer also to hand over digital copies of emails

A US official briefed on the matter - who was not authorized to speak publicly - said that Clinton's lawyer, David Kendall, turned over three thumb drives containing copies of roughly 30,000 emails after the FBI determined he couldn't remain in possession of classified information contained in some of the emails. The State Department has previously said it was comfortable with Kendall keeping the emails at his Washington law office.

The FBI is looking into the security of the Clinton email arrangement. There is no evidence that she used encryption to shield the emails or her personal server from foreign intelligence services or other prying eyes.

The email affair turned into a scandal when Republican Sen. Chuck Grassley of Iowa announced earlier this year that two emails that traversed Clinton's personal system had been deemed "Top Secret, Sensitive Compartmented Information" - a rating that is among the government's highest classifications.

Those two emails were among four that had previously been determined by the inspector general of the intelligence community to have been classified at the time they were sent, which Clinton denied. The State Department disputes that the emails were classified at that time, but has announced in the meantime that the US intelligence community recommended parts of two emails to be upgraded to top-secret level.

Earlier this year, Clinton had turned over to the State Department roughly 55,000 pages of emails she sent and received via her private email server. The department is reviewing those emails and has begun the process of releasing them to the public, while she has begun campaigning as a presidential candidate for 2016.

A US House committee has issued subpoenas for emails of Hillary Clinton from her time as secretary of state. Clinton says she wants the emails made public as soon as possible. (05.03.2015)