Climate change: A village falls into the sea | Environment | All topics from climate change to conservation | DW | 28.04.2016

Climate change: A village falls into the sea

In the coastal village of Kivalina in Alaska, erosion and declining fisheries due to climate change are threatening the livelihoods of the people who live there. That's why they want to establish a new village elsewhere. 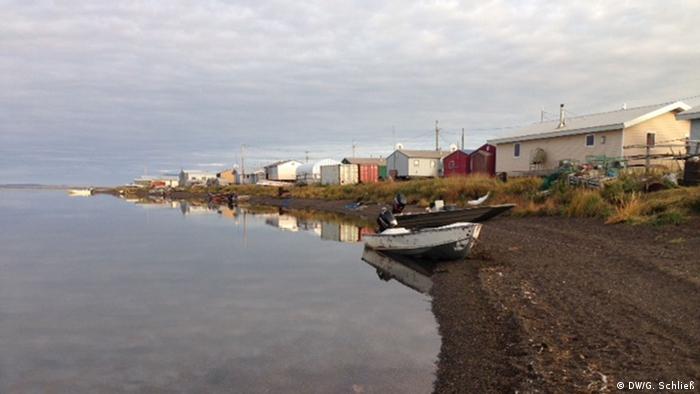 Stanley Hawley squats on one of the boulders that have been piled up along Kivalina beach ín an effort to keep the ocean from encroaching inland.

"With this protective wall, we've bought ourselves some time," says the tribal administrator, pointing at the construction that stretches several hundred meters along the coast.

It is peaceful today in this village in Alaska - the northernmost state of the United States, and waves run over the sandy beach and lap against the rocks.

The sea comes ever closer

But people in nearby houses sleep less soundly than they used to, especially when storms roar ashore. Some houses have already been abandoned, as Hawley - whose family belongs to one of the biggest clans in Kivalina - explains. Everyone knows this breakwater offers only temporary protection. 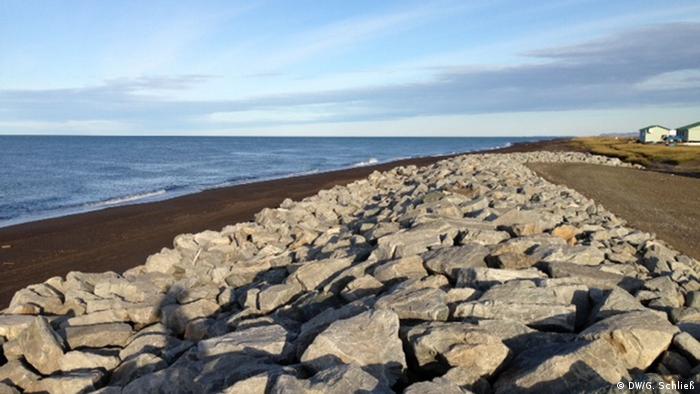 The seawall to protect against erosion has bought the villagers time

Climate researcher Scott Rupp from the University of Alaska says many coastal regions in the state are experiencing a "very substantial loss of land" as a result of erosion. Kivalina is a case in point.

The village lies on a thin headland, almost completely surrounded by water. First recorded in the mid 1800's, it has long thrived as a community and a stopping point for those travelling to the Arctic coast. But its geographical face is now shifting, and Rupp blames climate change.

As the world becomes warmer, melting off-shore ice at a faster pace, the village has virtually no protection from ocean storms.

"Villages like Kivalina are in a terrible situation," Rupp said. "They have to do something, because they are officially sliding into the ocean."

People and houses in danger

Austin Swan, the mayor of Kivalina, has brought a map with him to the beach. He points to a brown-colored zone that marks a long strip of sand and shore.

"We probably lost about 100 feet [30 meters] - and over the far southeast of the village of that section of the community, we lost up to 250 feet [76 meters] of our land," Swan said. And that's just way too much in two years," he told DW. 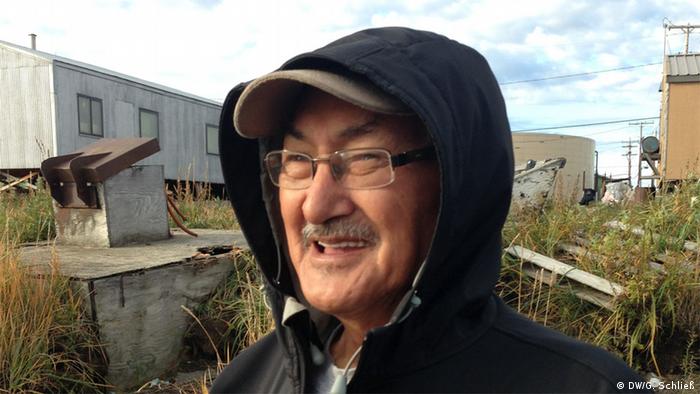 Kivalina has always depended on sea ice as a natural means of protection from erosion. But the ice no longer starts to form in October - like it used to do. Instead, it doesn't come until January or February. "That's not good for us," Swan said, resignedly.

Kivalina is home to more than 400 people. They belong to the Inupiat indigenous group, and have been on the island for more than a century. Many live in cramped conditions, with up to 20 family members in each each house - most of which have no running water.

For generations, the villagers supported themselves by fishing, and hunting seals or gigantic whales, but as the weather has changed, so has the volume of their catch.

Out on a morning fishing trip, Reppi Swan said Kivalinans haven't hunted a large whale in local waters for more than 20 years, and that the melting ice also means seals don't come anymore. This winter they only hunted a few.

"This was just not enough," Swan said in reference to his extended family of 50 people.

President Obama trekked up Exit Glacier in Alaska to make a dramatic statement about world climate. He has called the melting glacier "a signpost" of what the US faces as global warming threatens natural resources. (02.09.2015)

Residents of Kivalina have endured storm surges and devastating snowstorms in the past, but recent weather patterns make the loss of their livelihoods seem almost inevitable. So too, a need to relocate.

Plans for the village to move have been under discussion for decades. They started in response to a lack of space for the growing population, but the impacts of climate change have fueled the debate.

Reppi's sister Colleen Swan, who is a driving force behind the relocation plans, says possible new sites have been pinpointed and that they are ready to take the next step.

"We have all the information we need to move," she said. What they don't have, however, is the money. And with relocation costs estimated at more than $100 million, the project is at a stand-still.

No public funds for climate victims?

That's a lot of money for 400 people, some say - especially for a US state whose falling oil revenues have left deep holes in the budget. Even Alaska Governor Bill Walker made no promises during a recent visit to Kivalina.

Colleen Swan has given up hope of getting government support and has been trying to recruit private investors. There are no concrete results as yet. 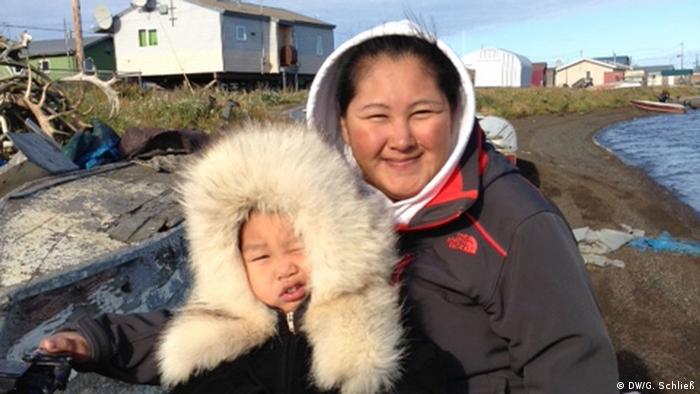 For most villagers, there's no future does in Kivalina - so they're planning a way out

Another alternative is to establish a provisional settlement on the site they have earmarked for their new village.

"If we set up a camp and make sure that there are at least 25 students, the state has to come in with a school," Colleen Swan told DW. "And the other agencies, they also have to provide services. And they will come forward with whatever it is we need. I'm prepared to do that," she says.

'We will find a way'

Not everyone in Kivalina back that approach. The mayor is among those who are torn. He believes that his people will prevail in the end - no matter whether they move, or stay in Kivalina after all.