Angry demonstrators have clashed with Indian security forces after a young man was killed. Police said he ignored signals to stop at the checkpoint, but his father refutes their claim. 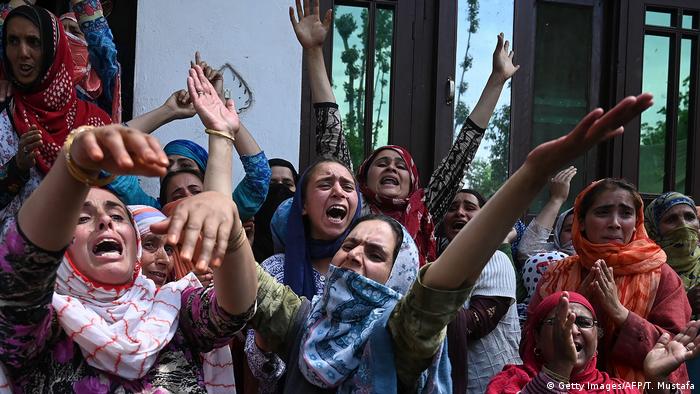 Hundreds of protesters in Indian-administered Kashmir clashed with security forces on Wednesday, hours after soldiers fatally shot a young man at a checkpoint.

The 25-year-old, identified as Mehrajuddin Peer Shah, was driving his car when paramilitary forces shot him.

Police said Shah was killed after he ignored signals to stop at two security checkpoints on the outskirts of Srinagar, the region's main city. They said a military convoy was passing at the time, and soldiers feared sabotage.

The victim was shot "when the car didn't stop despite warning shots," India's Central Reserve Police Force said in a statement.

The man was taken to a hospital where he died of his injuries, the force said.

Shah's father, Ghulam Nabi, refuted the police account, saying his son did not drive through any checkpoints and was shot in cold blood. "Had soldiers fired at his vehicle while fleeing any checkpoint, his car would have got bullet marks," he said.

A witness told reporters that Shah stopped his car when signaled by the soldiers.

"A security official told him something to which he replied that he had some emergency. They let him go but as he was getting into his vehicle, they shot him in the back," the witness said. "He was killed deliberately."

Soon after the news of Shah's death spread, hundreds of residents took to the streets chanting anti-India slogans, "Go India go back!" and "We want freedom!"

The protesters demanded that Shah's body be returned to the family for burial, as authorities did not immediately hand over the corpse.

As security forces moved to disperse the crowd, masked protesters threw stones at the troops who responded by firing shotgun pellets and tear gas.

Authorities also shut down internet services in the region, a go-to tactic for the administration to quell unrest.

An inquiry has been ordered into the incident, but rights groups say such investigations rarely yield any concrete results.

The 82-year-old was the first mainstream politician to be arrested under the PSA. Kashmir has been the subject of a dispute between India and Pakistan, where an armed rebellion against Indian rule has raged for decades. (13.03.2020)

Some countries in Asia issue official maps with their own version of where the national borders should be drawn. Many are used to influence public opinion. In India, distributing an unofficial map is a criminal offense. (03.03.2020)