Exchanges of gunfire along the tense border between India and Pakistan have left at least nine civilians dead and scores wounded. The rivals accuse each other of firing first. Intended peace talks collapsed last weekend. 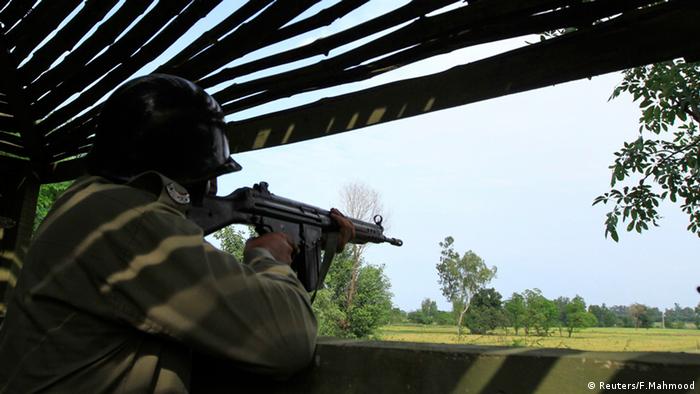 Border tensions between Pakistan and India resulted on Friday in the highest single-day toll since 2013 when friction escalated anew between the nuclear-armed neighbors. Each blamed the other side for opening fire first.

Pakistan's military said Indian mortars and bullets fell on two villages near the city of Sialkot in Punjab province, killing six civilians. Nearly 50 others, including 22 women and 11 children, were wounded, it said.

Pakistan's foreign office said India's high commissioner had been summoned to receive a "strong" formal protest over what it called India's "violation."

The intended talks between security advisors had been agreed last month when prime ministers Narenda Modi of India and Nawaz Sharif of Pakistan met at a summit in Russia.

Last Saturday, those hopes were dashed amid a welter of angry rhetoric, partly over Kashmir, which is divided but claimed entirely by both South Asian nations.

India had insisted that the agenda focus on terrorism, a reference to alleged Pakistani reluctance to hand over or prosecute the masterminds of the 2008 Mumbai attacks.

Friday's border exchanges coincided with India's marking of the 50th anniversary of a 1965 war fought over Kashmir that ended in a ceasefire and a return to front lines that predated the conflict.

In a tweet, India's Modi said he bowed to "all brave soldiers who fought for our motherland in the war."

A ceasefire agreement reached in 2003 had been marred quite often by border skirmishes. Earlier this month, at least nine civilians were killed and scores injured.

India accused Pakistan of arming and training insurgents, a charge Islamabad denies. On Thursday, India said it had captured a Pakistani militant alive in north Kashmir while three other militants were killed in a shootout.