Christmas: Not such a holy night under the Nazis | Culture | Arts, music and lifestyle reporting from Germany | DW | 24.12.2009

Christmas: Not such a holy night under the Nazis

An exhibition in Cologne shows how Nazis appropriated Christmas symbols to promote their ideology. Images of the holy family, stars and religious songs were manipulated to take the "Christ" out of Christmas. 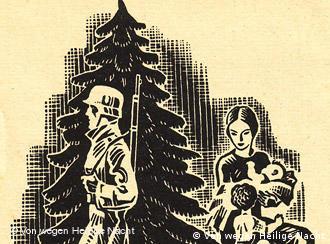 Nazi propaganda extended to Christmas cards and other traditions

Christmas is a high point in the religious calendar for Germans. Many of the traditions, images and songs enjoyed around the world have their roots in the Christmas celebrations of German speaking countries. Sparkling stars on the tree, a fair-haired and angelic baby, brightly-wrapped presents and joyful carols sung by church choirs are all parts of the celebrations on Dec. 24, the day marking the birth of Jesus Christ.

Between 1933 and 1945, under the Third Reich, Christmas was just as popular as it is today. But honoring the birth of a Jewish baby - who was celebrated as the Christian Savior - was difficult for Nazis to embrace. As a result, national socialist ideologues decided to remove Christian symbolism from the celebration. 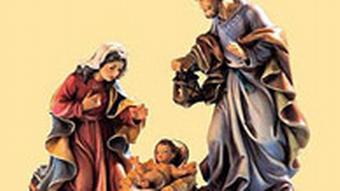 The Nazis aimed to take the Jewish baby, Jesus, out of Christmas

"Celebrating the birth of a Jewish baby was unthinkable for the Nazis," said Juergen Mueller, the chief researcher behind the exhibit "Not Such a Holy Night" at the National Socialism Documentation Center in Cologne, which documents Christmas tradition during the Third Reich.

But Christmas was too popular even during the Nazi period to be banned, Mueller told Deutsche Welle. "They therefore decided to corrupt it."

Initially Nazi officials had tried to reject all Christian traditions. They renamed the festival Julfest and propagated the Germanic origins of the winter celebration of light on December 21, the winter solstice.

But for the majority of Germans, the Christian traditions were still the basis of the holiday.

Mueller said Nazi officials then took inspiration from classical images showing a baby Jesus with his loving parents, Mary and Joseph. They reinterpreted this as a model Aryan family, an image which the Nazis had elevated to the highest levels during the late 1930s. So for the Nazis, the family rather than Jesus became the center of the Christmas celebrations. 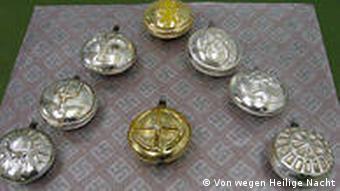 Churches in Germany, although outraged by the Nazis' fervent efforts to undermine beliefs central to Christianity, were powerless to protest what was happening.

"The reaction of the church was not very strong. At about 1936-1937, the Nazi government was so powerful that the possibility of protest was extremely low," Mueller said. "The Church couldn't really condemn it or protest against it, although it stuck to the Christian traditions within itself," he added.

No aspect of the Christmas celebrations was free of Nazi symbolism. The tree, which has long been a central component of German Christmas festivities, was stripped of its traditional decorations. Stars, angels, bells, fruit and candy were replaced with swastikas and ornaments shaped like miniature cannons, grenades and fighter planes. At the top of the tree, instead of a star or angel, firm adherents to the Nazi doctrine placed a soaring golden eagle, the German national symbol. Parents wrapped their children's presents in brightly colored paper with Nazi symbols. 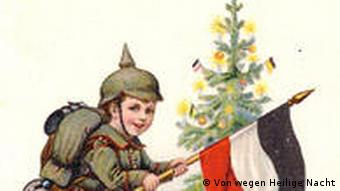 Propagandizing Christmas in Germany dates back to WWI

The most difficult of images for the Nazis to undermine was the star. A six-pointed Christmas star was too similar to the yellow star the Jews were required to wear; and a five-pointed star resembled the red star of the Soviets. As a result, the Nazis banned stars completely from Christmas tree decorations. Geometric shapes embossed with swastikas or Germanic symbols were used instead.

Popular Christmas carols were also rendered Christianity-free by Nazi composers. Barbara Kirschbaum, one of the staff members at the NS Documentation Center, told Deutsche Welle: "The Nazis tried to ban some of the Christmas carols with open Christian content."

"Some of the songs got new lyrics, some were completely recreated," she said.

"Hohe nacht der klaren Sterne" ("High night of bright stars") is one of the songs newly created by the Nazis. One transformed song, "Es ist fuer uns eine Zeit angekommen" ("The time has come for us"), is still popular in the Nazi version. People sing it even in churches, not being aware of the history of the lyrics," Kirschbaum said.

For Kirschbaum, the purpose of the exhibition is to discover what can be learned from the way the Nazis manipulated Christmas imagery. She said people need to understand that history is shaped by people, and that propaganda is used to rewrite history. When the visitors see this in the exhibit, it will increase their awareness of what happened under the Nazis, she said. 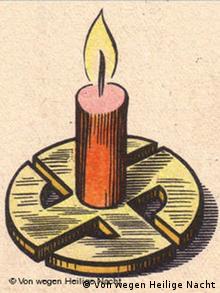 "Older visitors at first are usually touched by their childhood memories, which are reawakened by the objects. But slowly they see the purpose behind the things, something they often didn't realize when they were young. And this frightens them, to see how things were used and how their beliefs as children were used for propaganda purposes," said Kirschbaum.

Angelika Wasserburger, a 51-year-old visitor to the exhibition from Nuremberg, found the reality very uncomfortable.

The reaction of younger visitors to the exhibition is even stronger. Jonas Rahimi, a 15-year-old who came to the exhibition on a school trip, was shocked by how deeply Nazism left its imprint on Christmas celebrations in Germany.

"The Nazis really involved their radical views in every part of life. There was even a little war game for kids. It's very shocking to me," he said.

"I think it's very important that the people here in Cologne remember what happened here because it was very crucial and you should not forget it," he added.

"The Best in Heritage" is a commendation given to a handful of museums worldwide. Amsterdam's Anne Frank Museum has one -- and Cologne's Nazi Documentation Center does too. (11.03.2006)

Many DW-WORLD.DE readers commented on the controversy surrounding Nazi era sculptures that can still be seen at Berlin's Olympic Stadium. Most backed keeping the art in place as a reminder of Germany darkest past. (03.06.2006)

Italian police have dismantled an online hate group dedicated to antisemitic and racist propaganda targeting young people. The group was in the early stages of planning an attack on a NATO facility.