Hamburg have made the surprise decision to fire coach Christian Titz after a a run of one win in five games. The club have moved quickly to appoint a replacement in the shape of former Stuttgart coach Hannes Wolf. 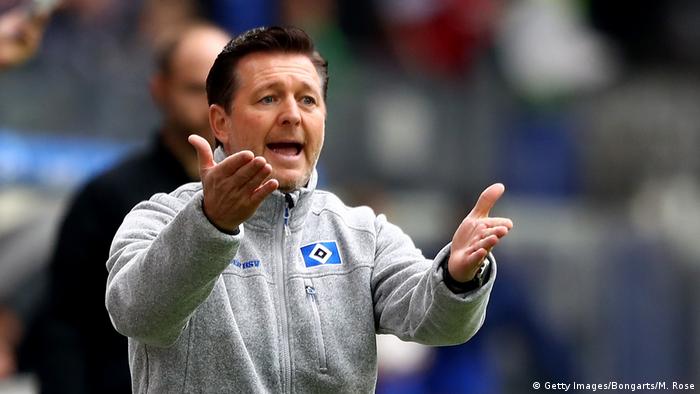 Former Stuttgart coach Hannes Wolf has been appointed, taking over with immediate effect.

"It's our responsibility to analyze the sporting situation objectively," Hamburg sporting director Ralf Becker said. "We have come to the conclusion that we have not developed in the way we wanted, unfortunately, and that there is a risk of missing out on our season's objective."

Titz took over as Hamburg's third coach of last season in March, when the club's first ever relegation from the Bundesliga was almost a foregone conclusion.

The 47-year-old Titz was tasked with stabilizing the side and leading them straight back to the top division, but despite promising results and a marked improvement, doubts surfaced in the past weeks with Hamburg failing to win their last three games at home, leaving them two points behind Bundesliga 2 leaders Cologne after 10 matches.

Wolf, 37, led Stuttgart to promotion in 2017 but was let go in January after a string of losses left them in the relegation zone.

"The 2. Bundesliga is a big challenge and we will not get promoted by just talking about it but instead by intensely concentrating on the task ahead in the coming weeks and months," he said in his maiden press conference as HSV boss on Tuesday afternoon.

Hamburg had been the only remaining founding member of the Bundesliga to have played every season since its formation in 1963 before it was finally relegated in May.

Seven years since the last meeting between Hamburger SV and FC St. Pauli, the local rivals met again in Germany's second city on Sunday. It's a tale of one city, two clubs and different worlds. (01.10.2018)