Donald Trump seems bent on intensifying his battle against "unfair" global trade practices, as he's reportedly seeking to impose tariffs on Chinese imports. DW examines whether Trump has a point in taking on China. 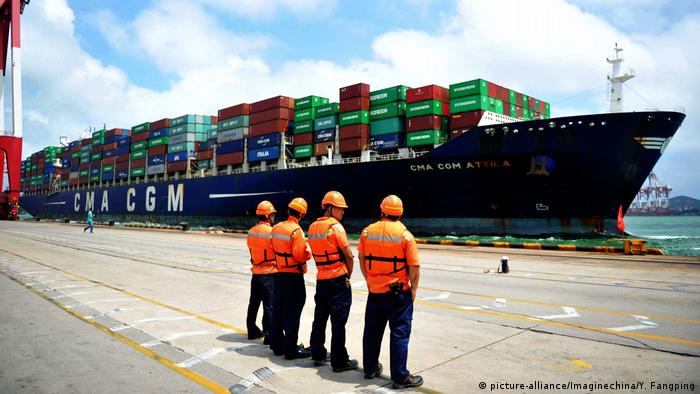 According to international media reports, the Trump administration is preparing a new package of tariffs on imports to the United States as early as next week, this time targeting more than 100 Chinese products.

The new trade measures, reportedly worth up to $60 billion (€48.5 billion), are intended to hit primarily the Chinese technology and telecommunications sector, but are said to also include restrictions on Chinese visas.

The move would come on the heels of Trump's announcement last week that the United States would levy tariffs on most steel and aluminum imports. On the occasion, the US president also said that China had been asked to deliver a plan to reduce its trade imbalance with the US.

Read more: China: Trade war with US would be disastrous

Last year, Washington launched a so-called Section 301 investigation into Chinese intellectual property theft. The results are due this summer, but already the US president seems determined to shut out companies from the American market and limit imports of Chinese products.

Apparently, Trump is aiming to punish China for investment policies that effectively force companies from across the world to give up their technology secrets in exchange for being allowed to operate in the country.

Here is a list of trade barriers that China contends are necessary to protect it as a developing country from the competition of more advanced economic rivals.

China seeks to protect its technology sectors by fully or partially blocking the access of US tech giants Google, Facebook, Twitter and others to its domestic market.

This year, the governments has also adopted a series of cybersecurity regulations that foreign businesses complain will raise the bar to the Chinese market by requiring firms to provide sensitive intellectual property for government checks. Local regulators have been tightening rules on foreign data and cloud services, implementing new surveillance measures and increasing scrutiny of cross-border data transfers. Laws that came into effect in 2017 require firms to store data locally.

In addition, cloud service operators that want to be in China must enter into local joint ventures with equity capped at 50 percent.

All this is part of a Chinese masterplan called "Made in China 2025," which aims to boost domestically made products in high-tech sectors with major government investment.

For many years, global carmakers can only operate in China through partnerships with local companies, which must hold at least 50 percent in the joint venture. The policy is intended to protect home-grown car manufacturers, but critics argue it is also aimed at gaining access to foreign companies' car-making technologies

Tesla chief executive Elon Musk said on Twitter recently that China trade barriers created an unfair playing field and that it was "like competing in an Olympic race wearing lead shoes." The e-car pioneer asked Donald Trump to do something about it, as the company wants to retain full control of a new factory it plans to build in China.

The request comes after Beijing imposed a quota on global automakers, forcing them to sell at least 10 percent of their cars in China as electric vehicles from next year on. Generally, China imposes a 25 percent duty on imported vehicles, versus a 2.5 percent import tax in the United States.

Foreign financial firms are subject to equity caps to participate in financial services in China, including a 50 percent limit on life insurance and a 49 percent cap on foreign-invested securities broker-dealers.

This month, China's securities regulator published draft rules that would allow foreign firms to increase their shareholding in joint-venture brokerages to 51 percent, with full control possible after three years.

In 2012, the World Trade Organization (WTO) ruled China was discriminating against foreign payment card companies, and despite pledging last year to give "full and prompt market access" to international payment network operators, no US firm has yet been granted a license.

China has a strict quota system for imported movies, limiting the number allowed to be shown on domestic cinema screens to 34 each year. Movie producers also get only about 25 percent of box office revenues, compared to around 40 percent they received in other markets.

China has banned all imports of poultry, poultry products and eggs in the wake of an outbreak of avian flue. In June 2017, It conditionally lifted an import ban on US boneless beef and beef on the bone.

Washington has also launched a complaint with WTO about China's price support for domestic wheat, corn and rice. The challenge filed in September 2016 resulted in a dispute panel set up by WTO in September last year, with a ruling still pending.

Since the beginning of 2017, ethanol producers from the US and Brazil are facing steep import tariffs on their products in China. Moreover, Beijing slapped hefty punitive duties on distillers grains (DDGS), a byproduct of ethanol production used as an animal feed ingredient.

China requires rail equipment suppliers to its domestic train networks to prove that at least 70 percent of their supply chain is in China.