German police have detained two visitors from China who took pictures of themselves giving the Hitler salute at the Reichstag building in Berlin. They could face charges under Germany's strict laws on Nazi symbols. 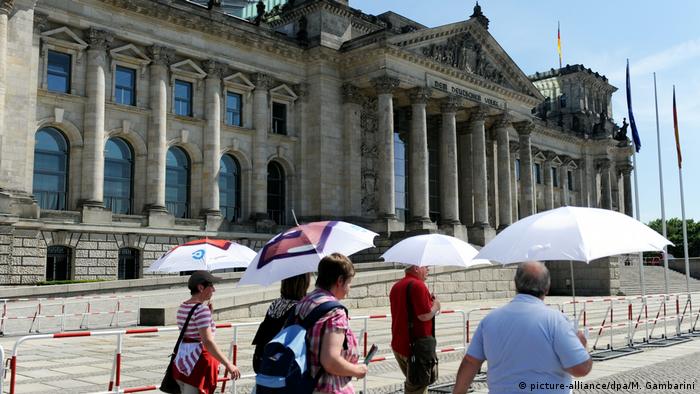 The authorities released the two men after they posted bail of 500 euro ($593) each, the police said on Saturday.

Earlier in the day, security guards at the historic Reichstag building alerted the police after noticing the tourists were making the Nazi salute at the popular site. The two visitors, aged 36 and 49, were also taking pictures of each other with their cell phones.

Read more: Russia to build replica of the Reichstag for cadets to practice storming

The Chinese citizens are now facing charges for "using symbols of illegal organizations" which could carry a fine or a prison sentence of up to three years, according to the police.

The Nazi party is banned in modern Germany, and its symbols and imagery can only be used for purposes such as teaching or historical research. Allowances can also be made for documentaries or films satirizing the Nazi regime. At the same time, swastikas and other Nazi symbols are nearly always censored in the German editions of video games set in the WWII-era.

The Reichstag itself represents a particularly sore spot in German history, as its burning in 1933 served as a trigger point for the Nazi regime to launch a crackdown on the Communists and other "enemies of the state." While Adolf Hitler's regime blamed Communists for the blaze, other theories suggest that Nazi supporters themselves set fire to the building in order to manufacture support for mass purges and restriction of civil liberties.

A sightseeing tour of Berlin