Germany's decision to phase out nuclear energy will spur demand for solar panels, wind turbines and other non-nuclear energy systems. But that doesn't mean domestic manufacturers will be the main beneficiaries. 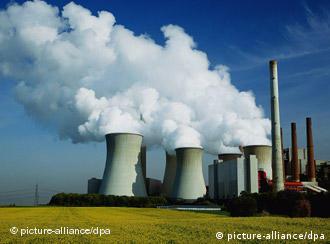 German nuclear reactors are on their way out

While some industry groups in Germany complain about the federal government's decision to phase out nuclear energy by 2022, others, particularly in the renewable energy sector, couldn't be happier.

Manufacturers of solar panels, wind turbines and electricity network systems are among the key groups that stand to benefit most from the country's decision to shut down its nuclear plants. But whether the country's own home-grown manufacturers will be the big winners in the scramble for potentially lucrative contracts remains to be seen.

On Monday, the cabinet of German Chancellor Angela Merkel agreed to an accelerated shutdown of its nuclear power plants - which currently supply around 23 percent of German power - and to more than double the market share or renewable energy sources to 35 percent by 2020.

The move, which reverses a decision only last October to extend nuclear plant life cycles, is a reaction to public opinion that swung against atomic energy in the wake of the Fukushima crisis in Japan. The policy shift could mean big business for manufacturers of alternative energy equipment as well as suppliers of natural gas. 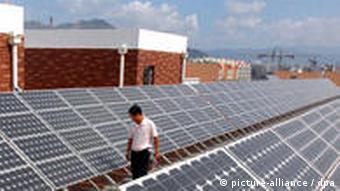 Chinese solar panel makers have a low cost base

Makers of solar panels are already licking their chops. Boasting a capacity of 7.5 gigawatts in 2010, the German solar energy market is already the world's largest. It has helped give birth to a photovoltaic manufacturing industry that accounts for 50 percent of solar module capacity in Europe, the Middle East and Africa, and about 10 percent worldwide, according to Sam Wilkinson at IMS Research in London.

But Wilkinson warns that German manufacturers can expect to face stronger competition from Asian rivals in the future. "Chinese suppliers have made a huge impact on global markets in recent years," he told Deutsche Welle. "They account for more than half of solar module production capacity today."

China already exports about 95 percent of its solar modules – mainly to Germany.

Chinese manufacturers have price structures that are far below those of European rivals, Wilkinson said, making it increasingly difficult for the Europeans to compete. As a result, some of them have begun to shift production to Asia to take advantage of the region's low labor costs.

While German manufacturing attributes such as innovation and quality are differentiators in the solar industry, competitive pricing is essential, according to Wilkinson. "At the end of the day, this is an incentive-driven industry," he said, referring to government subsidized schemes to spur demand for solar panels. "System prices must decrease at the same rate as incentives to keep investors interested. As modules make up a significant amount of the total cost of photovoltaic systems, the pressue is on suppliers to reduce their prices and costs."

Alexander Sewohl, a spokesman for the German wind energy association BWE, argues that the wind sector isn't quite the same as the solar sector, pointing to high system reliability requirements.

"If you buy an inexpensive wind turbine and it stands still, you have a problem," Sewohl told Deutsche Welle. "German companies have very high quality standards and offer comprehensive maintenance services, both of which are still lacking among Chinese competitors."

So far, no Chinese wind turbine manufacturer has been able to set foot in Germany, according to Sewohl. But that doesn't mean they never will, he adds.

"We don't have a crystal ball to look into the future," Sewohl said. "But we are aware that there are a growing number of Chinese wind energy manufacturers that are benefiting from expanding domestic demand and that the government would like to position five of them among the world's top 10."

Daniel Kluge, a spokesman with the German renewable energy federation BEE, agrees that innovative, quality products and comprehensive maintenance services will continue to help German suppliers compete globally. But he admits there is no guarantee they will walk away with the lion's share of the domestic contracts.

"China's solar and wind industries are very competitive and, at the same time, it's been very difficult for German suppliers to enter the Chinese market," Kluge said.

Still, Kluge is confident that innovation will continue to be the trump card of German renewable energy companies, pointing to efforts in the country to use electrolysis to produce hydrogen and store energy generated from renewable sources. "This could someday become another German export," he said.

The People’s Republic of China turns to Germany for nuclear expertise as the EU tightens nuclear regulations and the German government votes for a nuclear phase-out by the year 2022. (06.06.2011)

Germany's top politicians have approved plans for the country to stop using nuclear power completely in 2022. The legislation, marking an energy U-turn by Chancellor Merkel's government, can now be debated in parliament. (06.06.2011)

The outlook of nuclear power in Germany has gone through some changes over the past few years, but now new developments have readers weighing in with their opinions. (30.05.2011)