Chinese fighter jet 'made unsafe intercept of US plane'

The US military says a Chinese jet has carried out an "unsafe intercept" of one of its planes in international airspace. After a similar incident last month, the US warned China against establishing an air defense zone. 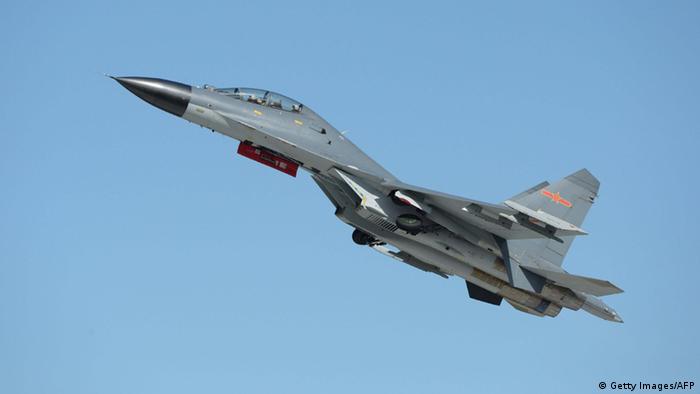 US Pacific Command said on Tuesday that a Chinese J-10 fighter had carried out an "unsafe intercept" of a US spy plane in international airspace over the East China Sea.

Two Chinese fighter jets flew near to the US Air Force RC-135 reconnaissance plane, said Pacific Command. The US plane was reported to have been on a routine mission.

"One of the intercepting Chinese jets had an unsafe excessive rate of closure on the RC-135 aircraft."

Two Chinese fighter jets have flown close to a US Navy reconnaissance plane in international airspace over the South China Sea. The incident is another sign that tensions between the Pentagon and Beijing run high. (18.05.2016)

The annual US-China meeting of foreign affairs, trade and other officials has opened in Beijing. The aim is to ease tension and improve cooperation between the two countries. (06.06.2016)

"Initial assessment is that this seems to be a case of improper airmanship, as no other provocative or unsafe maneuvers occurred," the statement said, without giving details as to exactly how close the Chinese jet came to the spy plane.

Pacific Command said the Department of Defense was addressing the issue with China "in appropriate diplomatic and military channels."

The incident was the second such intercept in the past month, after at least two Chinese J-11 tactical aircraft reportedly intercepted a US reconnaissance plane.

US Secretary of State John Kerry said earlier this week that the United States would consider any attempt by Beijing to establish an "air defense identification zone" (ADIZ) over the South China Sea to be a "provocative and destabilizing act."

US officials have expressed concern that China might declare such a zone as it awaits to outcome of an international court case brought by the Philippines against China.

In 2013, amid a dispute over islands also claimed by US ally Japan, China declared an air defense zone over the East China Sea.

China has claimed most of the South China Sea, with overlapping claims from the Philippines, Vietnam, Malaysia, Taiwan and Brunei.

At a key annual meeting between China and the US, John Kerry warned China that it should settle territorial disputes peacefully and based on "rule of law." Beijing countered that the US should not concern itself with matters so distant from its own shores.

After Nancy Pelosi's visit, China conducts its largest military drill in decades around the island. Some Taiwanese are worried; others have grown numb to Beijing's threats.