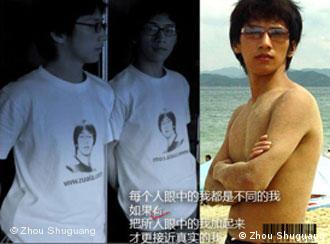 Shuguang Zhou is a prominent citizen journalist in China

Chinese authorities are preventing Chinese blogger and citizen journalist Shuguang Zhou from leaving for Germany without providing any official justification.

Zhou, who blogs under the name Zola, was invited by Deutsche Welle to be part of the international jury for the fifth annual weblog awards, The BOBs, and decide the winners. The jury will meet on November 26 in Berlin.

On Thursday, November 27, he was supposed to announce the jury’s selection at a public event in the Communication Museum in Berlin.

According to information provided to Deutsche Welle, Zhou was stopped and detained by the police on Friday, November 21, on the border between Shenzhen and Hong Kong.

On Monday, November 24, the police in Changsha confirmed that it Zhou wouldn’t be allowed to leave the country – as previously stated by the security officials. According to Zhou, the local authorities gave the verbal justification that he was a “possible danger to national security”.

Deutsche Welle and the German Federal Foreign Office are in contact with the Chinese authorities to arrange Zhou’s departure – but as of Tuesday afternoon were still unsuccessful. Zhou plans to take part in the selection process online, as long as there is no interference.

Zhou is 27 years old and works as a freelance journalist in Hunan. He is recognized as one of the first and most famous citizen journalists in China. He earned notoriety from his independent reporting about the resettlement conflict in Chongqing. He uses his blog to write regularly about social injustices that the state-run media conceals. In addition, he has worked to create a network of Chinese citizen journalists.

His blog www.zuola.com/weblog was nominated for the Deutsche Welle Weblog Awards in 2007.

Microsoft shuts down LinkedIn in China amid government pressure 14.10.2021

The professional networking site was the only major US social media platform that had been left operating in China.

China will soon award media accreditation based on social media history. Journalists who uncovered the early truths about the coronavirus in China fear that their press credentials will be stripped.