Chinese President Xi Jinping has inked more than a dozen deals with Rwanda as his "economic partnership with African countries" continues. The deals include loans and grants worth millions of dollars. 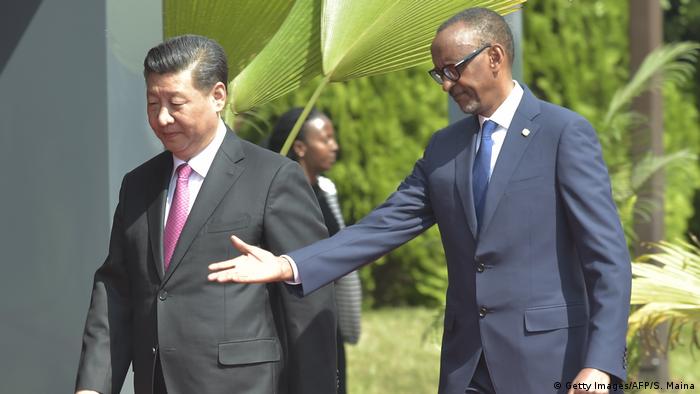 Chinese President Xi Jinping signed 15 bilateral agreements with Rwanda on Monday while visiting the East African country, the second stop on a four-nation tour to cement relations with African allies.

The agreements, the value of which was not revealed, focused on visa exemptions, strengthening mutual investment in e-commerce, cooperation in civil air transport, law enforcement partnerships and human resource development. They included loans for construction, hospital renovation and the development of Rwanda's new Bugesera airport.

"China relates to Africa as an equal," said Rwandan President Paul Kagame. "We see ourselves as people on the road to prosperity, and China's actions demonstrate that you see us in the same way. This is a revolutionary posture in the world affairs, and it's more precious than money."

Xi, who was in Senegal on Saturday, has offered to strengthen economic ties with Africa, a continent in which United States President Donald Trump has shown little interest.

"China will promote a sincere economic partnership with African countries," Xi told journalists at the end of his two-day visit to Rwanda. "We are bound with common interest. To grow our solidarity with Africa is an important foundation for China's foreign policy."

Traveling with his wife Peng Liyuan, Xi became the first-ever Chinese leader to visit Rwanda when he arrived on Sunday. It is his first trip since his re-election in March.

China is already Africa's largest trading partner. It also opened its first military base on the continent last year in Djibouti, located in the Horn of Africa. Djibouti launched a China-backed free-trade zone this month, which it calls the largest in Africa.

Ahead of his visit to Rwanda, Xi said China had become Rwanda's biggest trading partner and project contractor, with the trade volumes between the two countries registered at $157 million (€134 million) in 2017.

Some fear that poor nations are not prepared for Chinese investment. US officials and others have warned African nations against putting themselves into debt to China.

Xi is set to journey to Johannesburg in South Africa to participate in a summit of the BRICS emerging economies — Brazil, China, India, Russia and South Africa — that starts on Wednesday.

The summit comes amid the US' billion-dollar trade war with China and tough trade negotiations with other economic powers.

African markets are full of cheap bootleg Chinese versions of their textiles. As China comes under US pressure to respect laws on intellectual property rights, should Africa also take a stand? (30.05.2018)