Qi Xinghua has created some of the world's biggest 3D murals. Now the 35-year-old street artist has been invited to Berlin to paint a new work. DW met him while he was working on it. 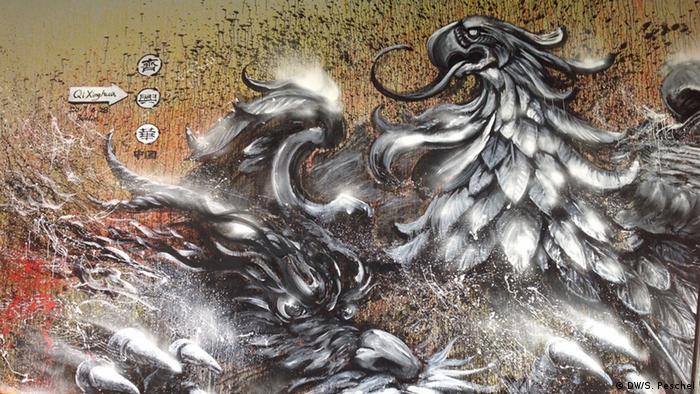 In China, he is known as Graffiti Man. Qi Xinghua transforms the scars of Beijing into oversized figures, believing that "every city needs its tattoos."

He has held different Guinness Book records for the world's largest 3D paintings - and constantly sees his street art disappear. When he goes out painting, he is always on the lookout for police. He's also an internet star, blogging and posting his artworks and projects on social media.

The artist, born in 1982 in the province of Heilongjiang, has now been invited to paint a mural in Berlin's Park am Gleisdreick. Qi Xinghua is spending a week in the German capital.

DW met him while he was still working on his mural, just before he finished it.

DW: You've just painted a mural in Berlin and are adding the finishing touches. How does it feel?

It's a great feeling. When I'm painting for a project like this one over a couple of days, I'm very concentrated and I block out everything else around me. Now I can relax. 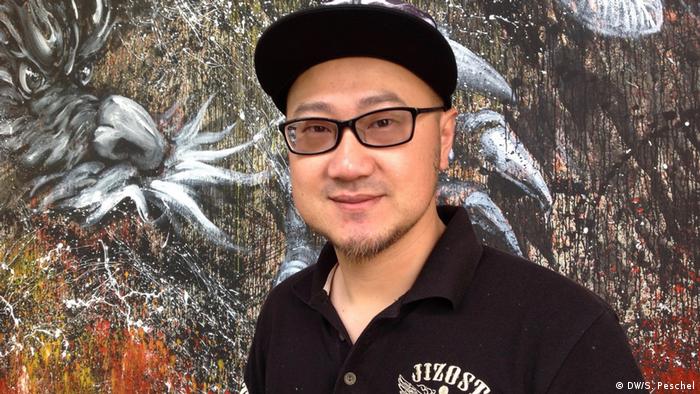 You're in Berlin for the first time, but you've been in Germany before?

Yes, I've already been invited to Dresden where I did a big painting. It was not on a wall but on canvas. It can therefore be carried elsewhere: it's being shown in Munich right now.

You are renowned for your murals. How did you start doing them?

I started studying fine arts in Beijing in 2002. I developed my interest for street art, graffiti and murals back then and when came the time to specialize, that's what I chose to do.

You are also very active on the internet. You publish photos of your works on Weibo, which is the Chinese Twitter, Instagram and Facebook. You have 260,000 followers on the platform. What does this mean to you?

It's very important for me. Art is not private. As an artist, you live publicly, you work and act in the public space. I can create this public sphere through social media. And there's a second aspect, which is very important for me: My works often disappear very quickly. They are either destroyed, painted over or covered by advertisement. Through the internet, at least the pictures of my works still exist. 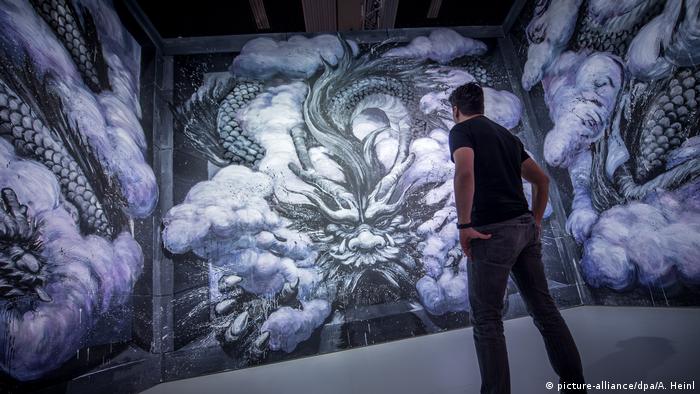 You often pick the neglected corners of Beijing for your work, painting over derelict walls. Among your most famous works are smiling pandas on a crumbling wall or the huge crocodile that has the shape of the stripping paint on a red wall. Your paintings make the city more beautiful, but they often disappear very quickly. Who's responsible for their destruction?

I've never been there when the paintings were covered, so I can't answer that question.

Does it make you sad?

The Taoist philosopher Laozi said: "Acting, not winning; creating, not owning." That's how I see it too. The goal is to create something and to leave something behind, but it doesn't have to be something material. It can also be the idea of an image.

In 2011, your gigantic 3D picture "Lions Gate Gorge" that was painted for a shopping center in Guangzhou went viral. It obtained the Guinness World Record for the largest 3D painting in the world. Does that painting still exist?

No it doesn't. It was a commissioned work that wasn't planned to be permanent either.

Until now, you've obtained four Guinness World Records. Are you proud of that?

That doesn't mean anything to me, it's irrelevant. 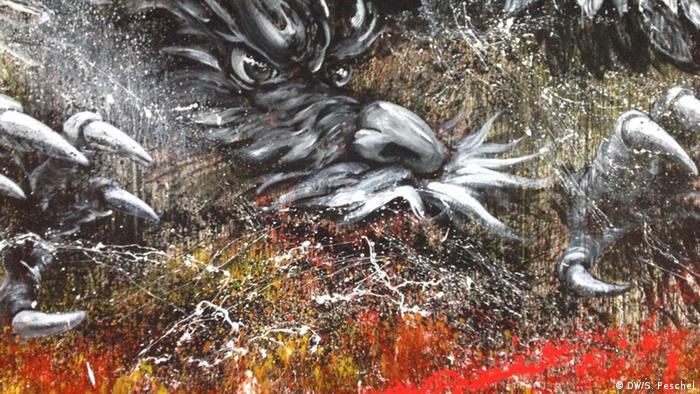 The Chinese dragon: everyone can see what they want in it, says Qi Xinghua

For your mural in Berlin, you've picked traditional symbols - the dragon and the eagle. What was your motivation?

I never interpret my own images. I don't want to limit the freedom of the people who see them. Everyone has their own interpretation and their own experiences, for example with the symbol of the eagle. But what I can say is that of course, the dragon is a symbolic Chinese animal, perhaps even a symbol for China. And the eagle is a German one. Since dragons don't exist, many other animals and attributes flow into the representation of a dragon. And even if the eagle is an animal that does exist, it still works that way as the German heraldic animal. And these two worlds of representation melt into each other here, in a vague and explosive way, varying according to the viewer's perspective. That's what I aimed to achieve here.

So Germany and China are melting into one, so to speak. You've also chosen Germany's national colors: black, red, gold or yellow. That was intentional as well?

I plan everything I do very well. Red and yellow are also the colors of China - as a well as black and white.

You often paint animals and rarely people. Why? 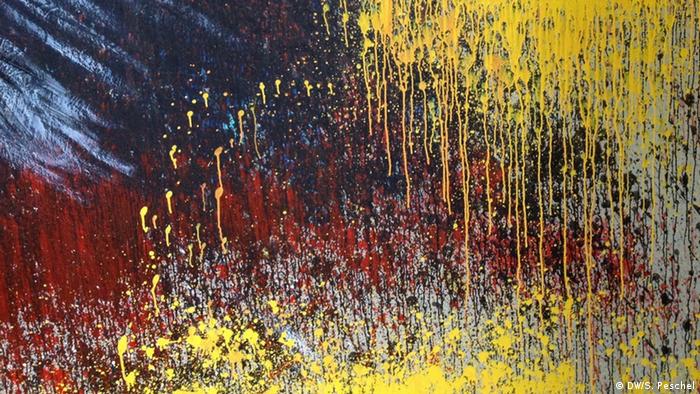 Drip it like Jackson Pollock: a detail from Qi Kinghua's mural

Art also has commercial aspects. You paint huge 3D murals and street art. They cannot be moved and shown in museums. How do you turn your success into a financial one?

I have different clients who commission me to do these 3D works. Most of them are in China, but a few are also in other places; for example in Miami and Dubai there are a big works of mine. Once in a while I also sell paintings that weren't done on walls.

On Sunday I am going to Munich to a street art exhibition. I will then go to Arnhem in the Netherlands for the World Street Painting Festival, where I'll be painting another big 3D work. 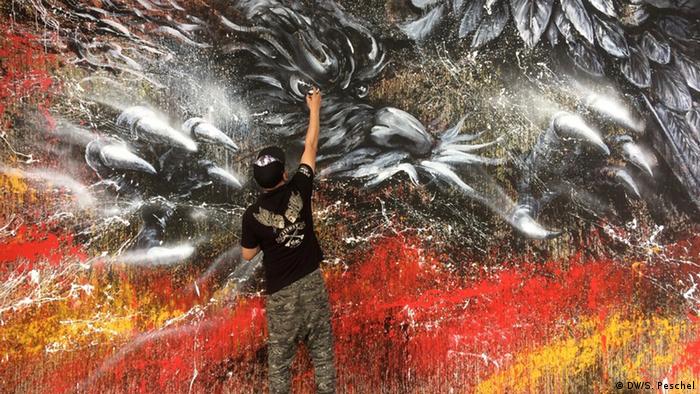 Brazilian street artist Eduardo Kobra is aiming for a world-record with his massive mural on the Olympic Boulevard in Rio. The kaleidoscopic work featuring five faces also has a message that couldn't be more timely. (04.08.2016)

Promoted as "the most valuable Banksy collection," the new Berlin exhibition featuring works by the elusive street artist can leave fans with a bitterly ironic aftertaste. (16.06.2017)