Brazilian street artist Eduardo Kobra is aiming for a world-record with his massive mural on the Olympic Boulevard in Rio. The kaleidoscopic work featuring five faces also has a message that couldn't be more timely.

The wall in the middle of Rio is a kaleidoscopic explosion of color, but five human faces emerge in photorealistic clarity. In a reference to the five Olympic rings, artist Eduard Kobra depicts representatives of indigenous people from five continents on the globe.

"There is growing intolerance in the world," said Kobra, 40. "Look at Europe, where people are rejecting refugees, rejecting what is different. I hope this mural, in the Olympic spirit, will help remind us that we are all different but all one: the human race."

Appropriately entitled "Ethnicities," Kobra's work references the Karen people from Thailand, the Huli of Papua New Guinea, the Tapajos from the Brazilian Amazon, the Chukchi of Siberia and the Mursi people of Ethiopa. 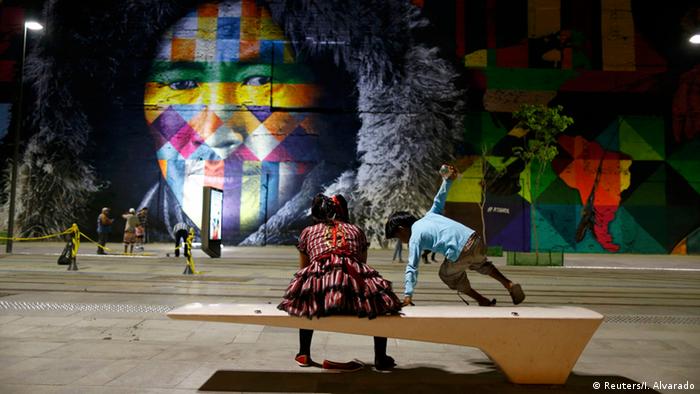 Kobra's "Ethnicities" features on what is now the Olympic Boulevard

Sponsored by the Rio 2016 organizing committee and city hall, the wall is located in Rio's formerly run-down port district, which has been overhauled for the Olympics. Part of the three-kilometer Olympic Boulevard, the wall will serve as a backdrop to outdoor celebrations planned for the next two weeks, including live music, street art performances, nightly fireworks, food trucks and kids activities.

Some 380 liters (100 gallons) of white paint, 1,500 liters of colored paint and at least 3,500 cans of spray paint were used to complete Kobra's 3,000-square-meter (over 32,000-square-foot) mural, which has been completed in time for the opening of the Summer Olympic Games on Friday.

Kobra and a team of four artists have spent about two months on the project, working up to 12 hours a day. They first had to prepare the cinder-block wall by plugging holes before they could begin painting. 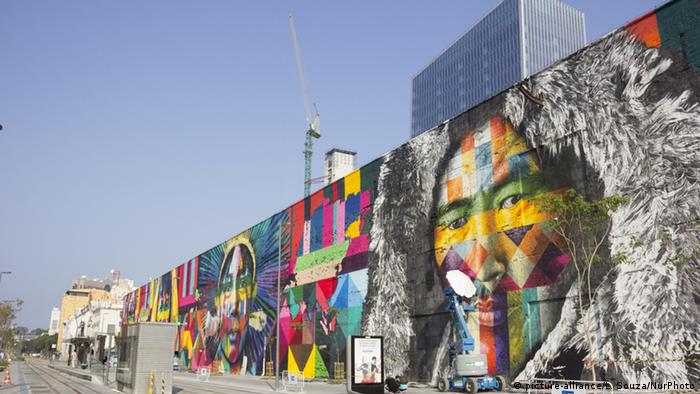 Will Kobra achieve a world record?

If Kobra is indeed accepted into the Guinness Book of Records for the largest mural created by one artist, his work would be nearly twice the size of the current record-holder: Mexican artist Ernesto Rocha's "Mazatlan" mural was completed in 2009 and measures 1,678 square meters.

#From Sao Paulo, Brazil's largest city, Eduardo Kobra is a renowned street artist with 264,000 followers on Instagram and over 168,000 on Facebook. He has created street art in cities around the world, including Tokyo, Dubai, New York and London.

Kobra says he grew up tagging walls in a poor neighborhood of Sao Paulo: "The street was my way to socialize, have fun and also protest against social exclusion." But now he only creates graffiti "with permission," he added.

From samba to flip-flops - Brazilian imports that Germans love

Expect flashmobs during the Olympic Games, but possibly not much more. Amidst government turmoil in Brazil, Rio's schedule of Olympic culture events has been drastically slashed, reports Donna Bowater. (12.07.2016)