Berlin has long been a street art hub. Now the city's artists have a new playground: an 80-room former bank that's awaiting demolition. The temporary museum is open to the public - including a virtual reality exhibit.

On a sunny weekday in Berlin, the graffiti-tagged room on the ground floor of a soon-to-be-demolished bank is a hive of activity.

Kimo is one of the members of the Berlin-based street art collective Die Dixons, which organized the large-scale show of 165 artists in the building. Sitting down for an interview, he takes a deep drag of what appears to be an oversized cigarette. His phone rings; he leaves the room, reemerging moments later with a large bag of snacks and baked goods.

In less than an hour, the residents of a senior home next door would be receiving a special sneak preview of the graffiti-coated belly of the building. "We want to say that we don't give a s*** about VIPs," Kimo said of the visit.

A playground for street artists

Using a mix of English and German, the exhibition space has been dubbed "The Haus." Each of the 80 rooms, open from April 1 through the end of May, were given to artists to do what they wish with them. Most of the 1,000-square-meter interior will likely be covered floor to ceiling with murals and tags (stylized signatures) - the kind Berlin has come to be known for. However, artists in a variety of mediums - from sculpture to photography - are also presenting works. 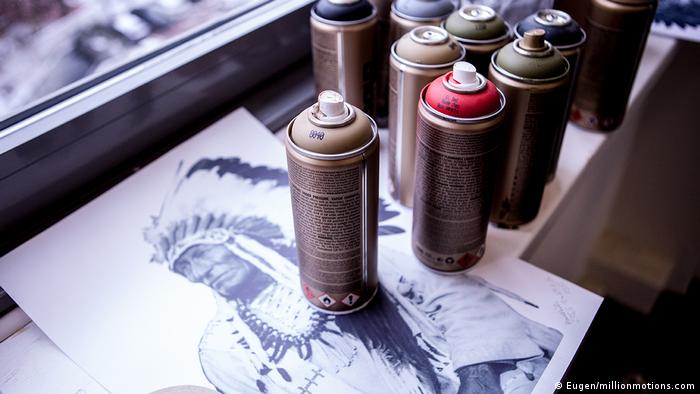 Tools of the trade

The exhibition is free and open to the public, provided guests follow one main rule: no photos allowed. "We want to say, 'Hey, come on, don't look at the world through your phone only - come here, get inspired by the room concepts the artists have created," said Kimo.

Die Dixons, who go by their aliases Kimo, Bolle und Jörni, have been painting, in Kimo's words, "since we can think" and have been part of Berlin's urban art scene for decades. They've made a name for themselves doing large-scale murals.

Creative use for empty buildings

When a friend informed them that Pandion, the Cologne-based developer that bought the former Volksbank, was looking for a creative use for the space before demolishing it, they presented the concept for The Haus. Die Dixons saw it both as a way to unite the street art scene in Berlin, while presenting a model for future projects aiming to keep Berlin's urban art subculture alive in the midst of a rapidly developing city.

"Why shouldn't we put a message out from here to investors saying, 'Hey, come on, if you're doing something in the city, invite us and we can work together," said Kimo, stressing that buildings can be used for creative purposes while they are sitting empty pre-demolition or renovation - a period that can sometimes span months or years. This particular edifice will be knocked down to make way for pricey residential units.

While Pandion is using the project as part of a marketing strategy, Die Dixons, are using the free space to promote street art. "They are using us and we are using them, so this is cooperation," said Kimo, grinning. "If this is a good balance, why not have more projects like this?"

However, says Kimo, in Berlin, a once-sparsely inhabited city now plagued by rapidly rising rents, the group would have declined to participate under other circumstances. "If the situation was that we are in Kreuzberg in a building where families live and it's going to be destroyed to make a business, then we would not be involved," he added.

While few details have been revealed about the rooms in advance of the opening on April 1, artists, including well-known Berliner names like Superbad Boys and El Bocho were given creative freedom to do what they wanted with the space.

Andrea Tavolaro, an artist who spoke to DW during a visit to The Haus, was putting the finishing touches on his unique sculptures - life-like nude human figures meant to be destroyed by visitors. 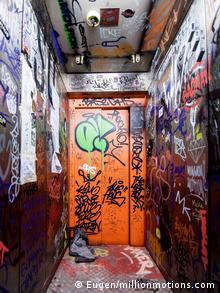 "They were searching for artists to portray the concept of impermanence, so I came up with the idea," said the Berlin-based Italian artist. "In this way, I make a parallel between art and life. Not only is our life fragile, but everything we do is fragile - even the Colosseum won't be there forever."

Tavolaro says he likes the concept of transforming a bank into a work of art: "It's the kind of revolution I would like to see in the future: taking power from the bank and giving it to people in order to communicate with each other."

One room features a unique virtual reality exhibit. Die Dixons invited the non-profit group International Justice Mission, which works to rescue victims of human trafficking and sexual slavery, to create a room resembling a Mumbai brothel. Visitors are given virtual reality glasses and are briefed by an IJR staff member before being given a window into the lives and circumstances of a sex worker, played by an actress hired for the video.

Die Dixons hope that if The Haus is successful, it will prove that the urban art scene is worthy of greater support from the city government. Already, the recently-appointed culture senator, Klaus Lederer, has pledged support for the project. The group says they are currently working to secure representation in city government that can support similar urban art projects.

"Berlin is using street art already for the city marketing," said Kimo, "so why shouldn't we get together and create a concept for the city - even to paint in hoods where it's not so beautiful?"

"Let's make it colorful together to tell the world that we are the mecca of street art - which we are already," he added.

Berlin has a new attraction called "The Haus". Over 150 artists have turned a disused bank into a temporary gallery for street art. Graffiti and paintings are spread across 5 floors. But only until demolition day! (03.04.2017)

Armed up to their teeth, or disguised as policemen - time and again, thieves have pilfered valuable art objects and paintings. Most recently, a valuable but very heavy gold coin was stolen from Berlin's Bode Museum. (29.03.2017)