In January, the situation of homosexuals in China has attracted quite a bit of media attention: The first public gay marriage took place, then the country’s first Mr Gay Pageant was shut down by police; and a long-awaited HIV awareness radio program was suddenly cancelled. 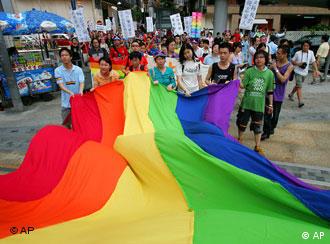 Gays standing up for their rights in China

The Mr Gay pageant leads up to the Mr Gay World contest and was to take place for the first time ever in China in mid January. Tickets were sold out, many of them to members of the Chinese media. But just minutes before the contestants were due to go on stage, the event was cancelled. Just a few days earlier, the media had also caught wind of the first gay marriage to take place in public. It was not official, but it caused a stir in the media.

Describing what usually happens with such hot topics in China, Jens Damm, an expert on homosexuality in China at Berlin's Free University, says:

"The interesting thing is: as soon as there is a bit interest in the media about such things, the government gets nervous about it. And then the conservatives say, you see, you stirred up some trouble, let's stop it now before it gets out of our hands and we can't control it any longer. The Chinese government is really very much afraid of losing control of anything which is happening in society."

Chinese sociologist and expert on sex studies, Fang Gang agrees and says the rights of gays to marry and adopt children have not been granted because "I don’t think this is a question of the government not offering rights. I think it is a problem in the societal perception of homosexuality. People thought that homosexuals were sick. Psychologists have found out that it has nothing to do with mental illness or imbalance, but this doesn’t mean that society will change its opinion right away."

Fang Gang says, however, that Beijing is becoming gradually more and more open, which can be seen in the number of gay clubs, which were non-existent before 2005. China’s first gay pride parade took place in Shanghai just last year. He says homosexuals might still have problems in smaller towns, but that in China's big cities, "gay people now have more freedom, they can live how they want without being bothered."

Before the 90s, homosexuality it didn’t officially exist in China. In the early 90s, the first case of HIV was registered in China, and soon after it became possible to talk about homosexuality, both at academic and in public.

Today views have changed and homosexuality has been decriminalized. But there is still a large number of gays who experience prejudice, mainly in their careers.

Damm says much is anchored in tradition, "Asian values, Chinese values are very much oriented towards family, towards procreation, towards the ancestors. The idea is that the most important thing for a Chinese family is that there are children. The idea that there can be children within gay and lesbian families has not yet arrived in China. So it is a quasi-religious feeling, that this is broken and kind of unnatural."

Though gays in China do not fall victim to religious prejudice as in some countries, they still have a way to go before they are fully accepted in Chinese society.