The sprawling real estate firm caused financial markets to panic amid fears it could default on a huge interest payment. This agreement with bondholders has calmed the market, for now. 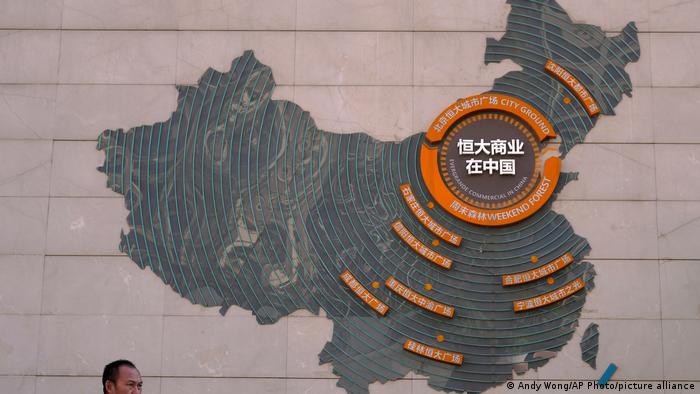 Evergrande, one of China's biggest real estate developers, has projects across the country

This should allow the conglomerate to avoid defaulting on an interest payment due on Thursday.

The agreement has momentarily calmed financial market fears that the sprawling firm could collapse and send shock waves through the world's second-biggest economy and beyond.

What are the details of the deal?

Evergrande said it will make a payment due Thursday on a 4 billion yuan ($620 million/€529 million) bond denominated in Chinese yuan.

A company statement said details were "settled in negotiations outside the market." It gave no indication whether that meant any change in the payment.

The bond has a 5.8% interest rate, making the normal amount due 232 million yuan for one year.

Investors "who bought and held the bonds" before September 22, 2021 "are entitled to interest paid this time," said Hengda, Evergrande's main property unit.

Debt woes not over for Evergrande

Evergrande did not mention any possible future payments, including repayments on interest for an offshore bond due Thursday.

The company is tackling a debt pile of around $310 billion.

It has admitted it is facing "tremendous pressure" and has warned that it may not be able to meet its liabilities.

Some analysts and investors have speculated that the Chinese government will likely step in with some kind of help for the corporate giant, due to the size of the company and its debt. But so far, Beijing has not commented on the crisis.

The firm employs 200,000 people, has a presence in more than 280 cities and claims to indirectly generate 3.8 million Chinese jobs.

Following news that Evergrande would not default on its debt payments, the Shanghai Composite Index bounced back from early losses on Wednesday, gaining 0.4%.

In Asia, Tokyo fell but benchmarks rose in India, Indonesia and Malaysia.

Markets in South Korea and Hong Kong were closed for holidays.

Investors have voiced concerns that a possible collapse of Evergrande posed major risks to China's financial stability and economic growth. Some analysts on Tuesday were calling it China's Lehman Brothers moment, referring to the collapse of the US investment bank that marked the beginning of the global financial crisis in 2008.

Gabriel Felbermayr, the president of the Kiel Institute of World Economics, rejected this comparison in comments to DW. "This is not a Lehman Brothers moment. The Evergrande problem is basically a Chinese one and the foreign investors are not involved in this problem to a very high degree," he said. "There is an exposure about $20 to 25 billion, but this a Chinese problem and not so much a problem of world scale."

A potential default could still have an impact because if Evergrande fails, China's growth forecast would have to be downgraded from 8.5% to less than 8%, Felbermayr explained. "China's contribution to global growth would be smaller in that case," he added.

Evergrande: Why the Chinese property giant is close to collapse

China Evergrande, once the country's second-largest real estate developer, is drowning in debt. Some 1.5 million people have put deposits on new homes that have yet to be built. A collapse could be catastrophic.