Fears of a US-China trade war have been on the rise as Beijing threatens to impose a 25-percent levy on American pork imports. The warning comes as a US tariff hike on steel and aluminium comes into effect. 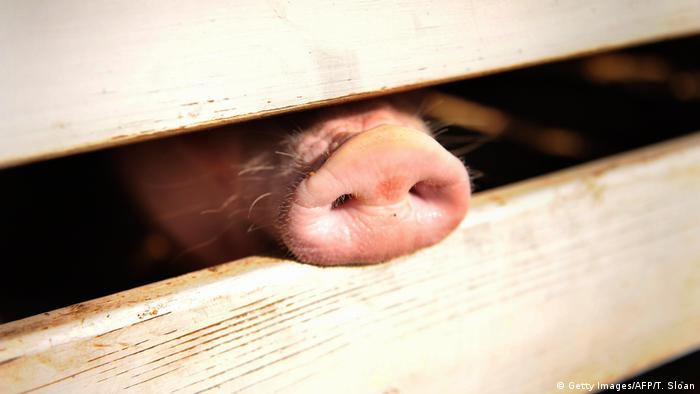 China has said it is "not afraid" of a trade war with the United States, after it threatened to introduce a 25-percent levy on American pork imports.

Such a move will likely put further pressure on the US' domestic pork industry, which is already facing weaker demand from China, the world's top buyer of the meat.

Rapid expansion of large-scale pig farms in China has been boosting domestic supply and lowering production costs. As a result, China's pork prices are currently hovering around €1.28 ($1.58) per kilogram.

WH Group, the world's largest producer of pork after the takeover of Smithfields Foods by China's Shuanhui international in 2013, was among the worst performers on Hong Kong's Hang Seng index, falling up to 10 percent following the news of the intended tariffs.

"Even without the tariffs, with such low prices, we will use more domestic pork for our Chinese business," said Luis Chein, a company director at WH Group, which has already been increasing its pork supplies from South America and Europe in recent years.

China's announcement is seen by analysts as a "measured response" to the US, with 127 other US products targeted for tariffs, including ethanol, fresh fruit, steel and wine.

The threat from China comes as a retaliatory move to a US tariff hike on Chinese goods to the tune of $60 billion — and financial markets sank amid concerns that the escalating tensions could disrupt the world's biggest trading relationship.

"We don't want a trade war, but we are absolutely not afraid of it," said Hua Chunying, a spokeswoman for the Chinese Ministry of Commerce.

Some industry participants said the tariffs and the threat of a brewing US-China trade war would create more Chinese demand for European pork exporters, who have boosted supplies to China in the last two years after sanctions on Russia closed one of the region's key markets.

Other experts, such as Chinese economics professor Huang Tsemin, believe only dialogue is in the interest of both parties.

"Donald Trump is arrogant and thinks the US can profit from a trade war, but the reality is that no-one gains from trade wars. There is no doubt that both sides will suffer," Tsemin told DW.

"I would say it is better for both sides to sit down and talk — the trade relation should be friendly. If the US refuses to negotiate with China, both sides will end up imposing tariffs on each other. Negotiations are much better for everyone."

Despite the bluster from both the US and China, Tsemin does not believe a trade war is inevitable. "It is not entirely inevitable," he said. "Resolving trade disputes relies on wisdom of officials from two sides."

The US president cited "intellectual property theft" as he signed the new tariffs into law, but US Commerce Secretary Wilbur Ross suggested the new measures were a way of bringing Beijing to the table, saying they were "the prelude to a set of negotiations."

But a senior US official later contradicted this, claiming that Washington was "not interested in creating terms for a dialogue."

"We are interested in creating some motivation for China to actually take concrete actions to further open their markets to US exports," the official told AFP news agency on condition of anonymity.

However, such an aggressive move from the US could well backfire should talks break down or fail to materialize altogether.

The rumblings of a global trade war have shaken stock and currency markets. Shares reacted to US President Donald Trump's decision to slap high tariffs on Chinese goods and Beijing's pledge to retaliate. (23.03.2018)