China reluctant to fund eurozone bailout | Europe | News and current affairs from around the continent | DW | 31.10.2011

President Hu Jintao has begun a three-day visit to Austria ahead of a crucial G20 summit in Cannes as China, rich in cash from exports, reacts cautiously to overtures asking it to help Europe out of its debt crisis. 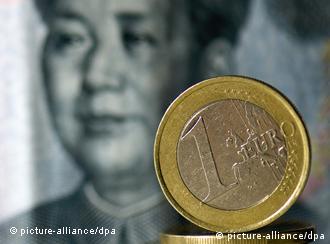 Will the euro come to depend on China's Yuan?

In Beijing, Regling reportedly sought a Chinese pledge of 100 billion euros - to be told by Deputy Finance Minister Zhu Guangyao that Chinese investment in Europe's bailout fund should not be on the agenda for the Group of 20 industrialized and emerging powers when they meet later this week in Cannes.

That conference in southern France will take place in the whirlwind of last week's marathon Brussels summit at which EU leaders agreed to write off half of Greece's private debt and to boost the EFSF to protect bigger economies like Italy's. 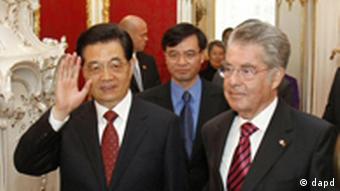 The Xinhua news agency on Monday reiterated China's reluctance to use its massive foreign currency reserves of 3.1 trillion euros to rescue Europe, saying it could not be a "savior." Last week Beijing said it wanted more clarity before investing in the EFSF.

Hu is bringing a trade delegation, estimated at 160 strong, which is reportedly keen to glean Austrian know-how in fields such as environmental technologies and transport.

French President Nicholas Sarkozy, who will host the G20 summit, has been heavily criticized by opposition Socialists after he phoned President Hu last week and urged China to play a "major role." 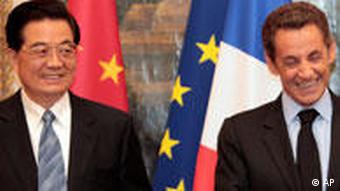 China, said Sarkozy, had "60 percent of global reserves" and should invest in the euro instead of the US dollar. Sarkozy, who is standing for a further term as president next year, has portrayed himself as the best leader to reduce France's sovereign debt.

But the Socialist candidate for the presidency, Francois Hollande, accused Sarkozy of deferring to Germany within the eurozone and to China on the global level.

"What we have ended up with now is a double-dependence. We are dependent on Germany, which sets the rules of the game [in Europe], and on China," said Hollande. 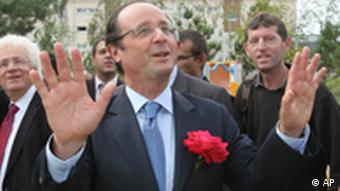 "China has taken over the baton and become the banker to the world. That's the new deal of the 21st century," said Raffarin.

Chinese investment in Europe not a 'question of choice'

The European Commission 'is being pushed aside'

Jacques Delors doesn't think too highly of the governments haggling for solutions to the eurozone's problems. After the summit on saving the euro, the former EU Commission President sees danger ahead for Europe. (31.10.2011)

Cautious optimism continued to pervade global markets a day after European leaders agreed a deal on Greek debt and the EU's emergency fund. (28.10.2011)