China has mastered a key part of the German technology to build high-speed magnetic levitation trains and is now aiming to cut the costs of its new line by one third, according to state press. 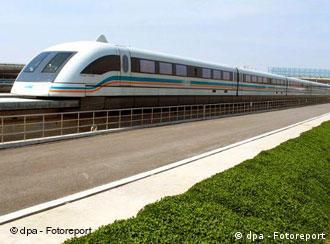 China is expected to begin building the 170-kilometer (105-mile) MAGLEV line between Shanghai and the tourist city of Hangzhou this year, using Chinese as well as German technologies.

The China Daily quoted the vice minister of the National Development and Reform Commission, Zhang Xiaqiang, as saying costs were expected to fall after China mastered the German technology used to build the MAGLEV tracks.

"Our aim is to limit the cost of each kilometer of MAGLEV line to approximately 200 million yuan ($25 million)," the paper quoted Zhang as saying.

That means the unit cost will be cut by one-third, The China Daily said. The current line cost 310 million yuan ($39 million) per kilometer to build.

"Lowering the cost of a MAGLEV system is a significant issue in the study and construction of the Shanghai-Hangzhou MAGLEV railway. We are now confident we can achieve that," Zhang was quoted as saying. 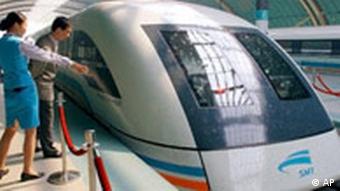 China currently operates the world's only commercial MAGLEV line, which runs 30 kilometers from Shanghai's airport to the financial center in the Pudong district.

The Shanghai-Hangzhou MAGLEV line should be completed ahead of the 2010 World Expo in Shanghai, according to earlier state press reports. Planners expect to construct four stations along the route that will whisk passengers from Shanghai's international airport to Hangzhou in just 26 minutes, the reports said.

Germany's Transrapid International, a consortium between German industrial giants ThyssenKrupp and Siemens, is the original designer and builder of the MAGLEV trains, which travel at up to 430 kilometers (270 miles) per hour.

Transrapid has already signed a deal to be involved in the new line to Hangzhou, but Thursday's report indicates its role will be scaled back compared with the service between Shanghai and the airport.

As in many other high-tech industries such as aerospace and autos, China is intent on developing its own technologies so as not to be reliant on foreign companies and to ensure it can cut costs.

But some in Germany are concerned about copyright protection, and accuse the Chinese of copying technology from countries doing business there. 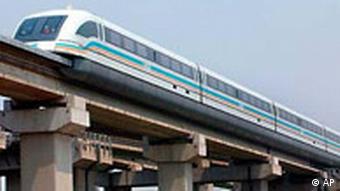 The Transrapid is the world's only commercial magnetic-levitation train, but not for long

"What's happening in China smells suspiciously like technology theft," said Bavarian Premier Edmund Stoiber after he learned of China's plans to build its own MAGLEV train. He has suggested putting the issue of Chinese development and intellectual property protections on the agenda of the next G8 meeting.

The head of ThyssenKrupp, Ekkehard Schulz, was somewhat more diplomatic. "It appears that some Chinese patents overlap quite a bit with our own," he said.

There are similar worries about technology and China being voiced across the Atlantic. Former US Commerce Secretary Donald Evans made US concerns official in Beijing. He cited the example the QQ mini car from China's Chery Automobile Co. American carmaker General Motors claims the QQ is a copy of its Chevrolet Spark model.

The Chinese deny any technology plagiarism in both cases. The China Aviation Industry Corporation has said the new Chinese "Zhui Feng" magnetic train is not dependent on foreign technology. It is much lighter than the Transrapid product, the company said, and features a much more advanced design.

Ending his three-nation tour of Asia, German Foreign Minister Frank-Walter Steinmeier has met with Chinese President Hu Jintao in Beijing. A number of controversial issues were on the agenda. (Feb. 23, 2006)