China-Japan row ′increasingly difficult to solve by diplomacy′ | Asia| An in-depth look at news from across the continent | DW | 29.07.2014

Over the past months, the Sino-Japanese rivalry has gone beyond an island dispute, introducing multiple flashpoints to the bilateral ties and increasing the risk of armed conflict, analyst Yanmei Xie tells DW. 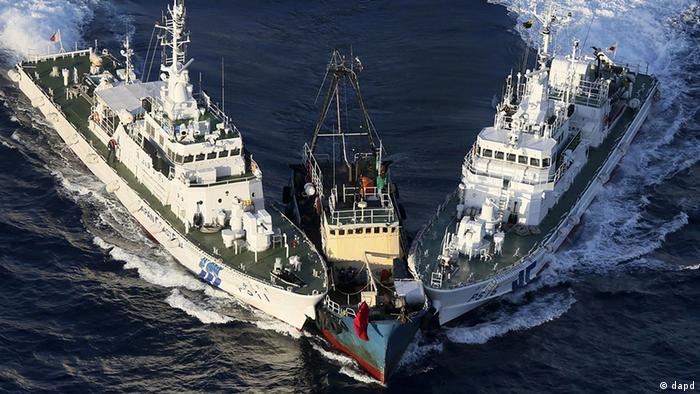 Relations between Tokyo and Beijing have been deteriorating over the past months as the room for diplomacy has been shrinking. The tensions started in 2012 as a dispute over the ownership of Senkaku/Diaoyu islands, but China's announcement late last year of the implementation of an Air Defense Identification Zone (ADIZ) - overlapping that of Japan's and covering the disputed islands - stoked fears that Beijing wanted not only to own the islands, but also to expand its control over large swathes of the East China Sea.

Japanese Prime Minister Shinzo Abe's visit to the Yasukuni Shrine - which honors 2.5 million Japanese war dead including convicted war criminals from World War II - sparked further controversy. In July this year Japan approved a reinterpretation of the constitution that allows the military to defend an ally and commit troops to combat missions overseas, one of the biggest changes in Japan's security policy since 1945.

Yanmei Xie, China analyst at the International Crisis Group who co-authored the organization's recently released report Evolving Sino-Japanese Tensions, says in a DW interview that while bilateral ties are likely to remain in a controlled freeze in the near future, a cordial meeting between Shinzo Abe and China's President Xi Jinping at a summit of the APEC trade group in November can set the tone for fence-mending.

DW: Why do you conclude in your report that the possibility of a resolution of the Sino-Japanese conflict seems to be diminishing?

Yanmei Xie: The two countries remain decidedly deadlocked on the issue of sovereignty over the Diaoyu/Senkaku island chain, which set off the sharp deterioration in bilateral relations about two years ago. Prospects for a resolution to the islands dispute appear very dim, as their positions are wide apart: China wants Japan to admit the islands are disputed, while Japan wants China to withdraw its patrol vessels. Neither is willing to accept the other side's request, and politically viable options to bridge the gap remain elusive. 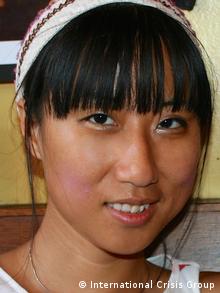 Strategic mistrust has deepened. Both sides perceive diminishing utility in engaging the other side diplomatically and, as a result, increasingly resort to security hedging. The security measures, once implemented and institutionalized, are long term and structural. The institutionalized strategic confrontations tend to make threat perceptions into self-fulfilling prophecies and become impervious to diplomacy.

What are the main issues at the core of the enmity?

On the surface, the issues include the islands dispute, China's East China Sea ADIZ, Japan's attitude towards World War II history, Japan's adjustment to its security policy and China's rapid defense build-up and corresponding lack of military transparency. However, underlying all these factors is the shift in the regional balance of power. China has become powerful and expects the balance of power to continue shifting in its favor. It has been flexing its already significant power in order to advance its maritime claims and to attempt to alter the regional order. In the process, it is trying to condition neighboring countries to accept a more assertive China. Japan, however, refuses to be conditioned.

What strategy is China pursuing, particularly in the context of security?

China is pursuing a strength-based approach, based on its outlook that the balance of power will continue shifting in its favor. It deploys administrative and law enforcement resources to strengthen its claim to the islands. Further, it applies diplomatic pressure by denying Japan bilateral political engagement and attempting to isolate it internationally by portraying the Abe administration as revisionist and potentially militaristic.

With his mind set on diversifying investments, Japanese Premier Shinzo Abe has embarked on a five-nation tour of Latin America. But while economic ties are high on the agenda, the PM will also launch a diplomatic push. (25.07.2014)

All the while, it continues its rapid defense build-up as deterrence. With its considerable and growing diplomatic, economic and military might, it gradually advances modifications to the status quo, but does so incrementally and skillfully - taking advantage of its opponents' aversion to escalation - to keep tensions below the threshold of violent conflict.

How is Japan reacting to China's assertiveness?

Diplomatically and politically, Japan refuses to compromise under pressure. It has taken steps to enhance its defense, boosting its capabilities, especially in the south west, to safeguard and defend remote islands against attack. But knowing the limits and risks of contending with China one-on-one, Tokyo pursues a collective response, by tightening its alliance with the US and attempting to partner with Southeast Asian countries.

Its recent move to lift the ban on collective self-defense is a major step towards a more robust US-Japan alliance. Tokyo also aims to convince other regional countries that China's behavior in the East China Sea, as well as its actions regarding disputed territories in the region, violate international rules and norms. Tokyo seeks to rally neighboring countries around the shared desire for a regional order premised upon rule of law. Japan has also stepped up assistance to Southeast Asian countries to build their maritime capacity and enhanced defense cooperation with them.

Japan's emphasis on rule of law is partly based on a calculation that time is not necessarily on its side - even with the US as an ally - in a contest of strength with China. A rules-based system, with the promise of reducing power imbalances by binding powerful and weak nations alike, resonates with Southeast Asian countries that would be disadvantaged in a regional order determined solely by strength.

Why are Chinese leaders and state media increasingly focusing on Japan's brutal invasion and occupation of China during the 1930s and '40s?

The anti-Japan rhetoric coincides with a convergence of war-related anniversaries, including the Marco Polo Bridge Incident on July 7, the onset of the first Sino-Japanese War on August 1, and Japan's World War II defeat on August 15. It is likely a response to Japan's lifting of its constitutional ban on collective self-defense, as well as another attempt at utilizing these anniversaries and memory of Japan's past aggression to isolate the Abe administration internationally, or in the region at least. 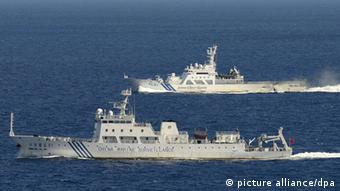 "The Chinese have stepped up exercises in offshore waters in its quest for blue water capability," says Xie

Such an approach further reinforces the perception in Japan that China has no intention to repair ties. It also restricts the room for diplomatic maneuvers for Chinese leaders, as it inflames nationalism and turns the public even more hostile toward any moderation in China's dealings with Japan.

On the issue of history, Prime Minister Abe has not played a constructive role either, with his pilgrimage to the Yasukuni Shrine, as well as his nationalistic statements and gestures that suggested a revisionist view towards history, exacerbating the situation.

How do you see the state of bilateral relations developing in the near future?

The bilateral relations are likely to remain in a controlled freeze, especially at the political and diplomatic levels, meaning that ties are unlikely to warm up again anytime soon. At the same time, neither side desires further deterioration, especially armed conflict. This is a fragile state with multiple flashpoints. The islands dispute is active, although in a holding pattern. The dispute over history is very much alive and inflammable. China's People's Liberation Army has come into increasing contact with Japan's Self-Defense Forces as the Chinese have stepped up exercises in offshore waters in their quest for blue water capability.

The two sides have starkly different interpretations of their operational rights and limitations, resulting in repeated close calls. Since China announced an ADIZ that overlaps with Japan's, there has been a spike in the number of dangerous encounters by military aircraft, with both sides accusing the other of provocative behavior. That is to say, managing this delicate relationship requires extreme care. It will require more leadership and political courage from the very top to begin fence-mending.

What is needed to de-escalate the situation?

The two sides need to manage the multiple flashpoints with extreme care. They need to quarantine the islands dispute, meaning both sides must take steps to prevent escalation, avoid further incidents and keep the dispute from making news. 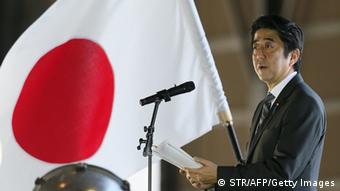 Prime Minister Abe has exacerbated the situation with his visit to the Yasukuni Shrine, as well as his nationalistic statements, says Xie

They need to give clear instructions to frontline actors, including coast guards, navies and air forces to refrain from provocative behavior, and to avoid clashes and any other incidents.

Abe needs to assure the Chinese side that he will not visit Yasukuni again as Prime Minister. He and other senior officials need to avoid comments that suggest revisionist views on World War II history. China needs to dial down anti-Japan rhetoric and open up high-level political channels to Japan. A cordial meeting between the two leaders at the APEC summit can set the tone for fence-mending.

Such a meeting can provide the political shelter, which is especially necessary on the Chinese side, for diplomats and other caretakers of the bilateral relationship to begin the heavy lifting for easing tensions.

Yanmei Xie is a China analyst at the International Crisis Group. You can follow her on Twitter @YanmeiXie.