Foreign investment, which has been instrumental in Africa's growth, fell by 16% last year

The rise contrasted with a steep fall in global flows of foreign direct investment (FDI), which fell by 35% to $1 trillion, hurt by a pandemic-induced recession — the worst since World War II. The slump meant that global investment flows last year were almost one-fifth below the 2009 trough after the global financial crisis.

Developed economies saw a dramatic drop in foreign investment, with Europe registering an 80% slump. Emerging economies fared better, thanks to resilient flows in Asia. They accounted for two-thirds of global FDI, up from just under half in 2019.

"Overall, Asia remains the strongest engine of global FDI," said Richard Bolwijn, one of the authors of the report. "It remains attractive because of the high growth numbers, because of the shifting of manufacturing capacity from China to other lower-income countries in the region, and because of the prospects for further growth of regional value chains." 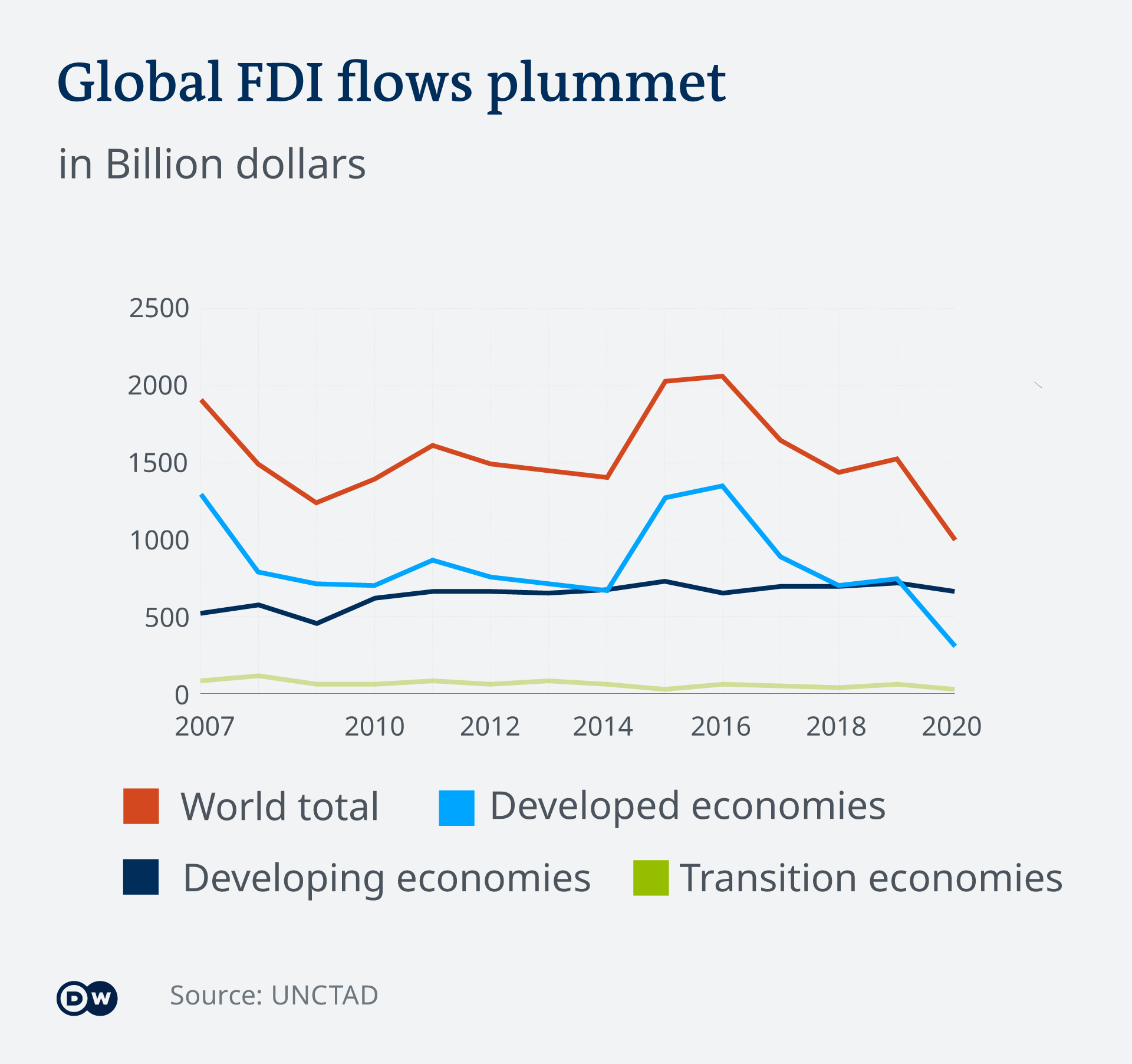 Asia is expected to account for more than 50% of the global output in the next two to three decades as the center of global economic gravity shifts from the West to the East. The region is expected to contribute roughly 60% of global growth by the end of this decade thanks to its ever-growing middle class, according to the Asian Development Bank.

Bolwijn said the FDI figure for Asia was inflated due to exceptionally low levels of investments in Hong Kong in 2019 as a result of social unrest and because of transactions by Chinese multinationals through Hong Kong. Excluding Hong Kong, FDI in Asia fell 6% — but the region was still more resilient than others.

India saw a jump of 27% in FDI to $64 billion, mainly driven by mergers and acquisitions (M&A). Last year, global investors, including tech titans such as Google and Facebook, invested about $27 billion in Indian billionaire Mukesh Ambani's Reliance Industries, betting on the company's ambitions of becoming a major force in technology and e-commerce.

In 2020, multinational corporations from developed countries reduced their investment abroad by more than half to $347 billion — the lowest value since 1996.

Profits at these firms fell by more than a third on average, crippling their ability to reinvest cash for growth purposes. Reinvested earnings on average account for more than half of global FDI flows.

FDI flows to Latin America plummeted by 45% to $88 billion — the sharpest decline among developing countries — amid a collapse in export demand, falling commodity prices and a drop in tourism. 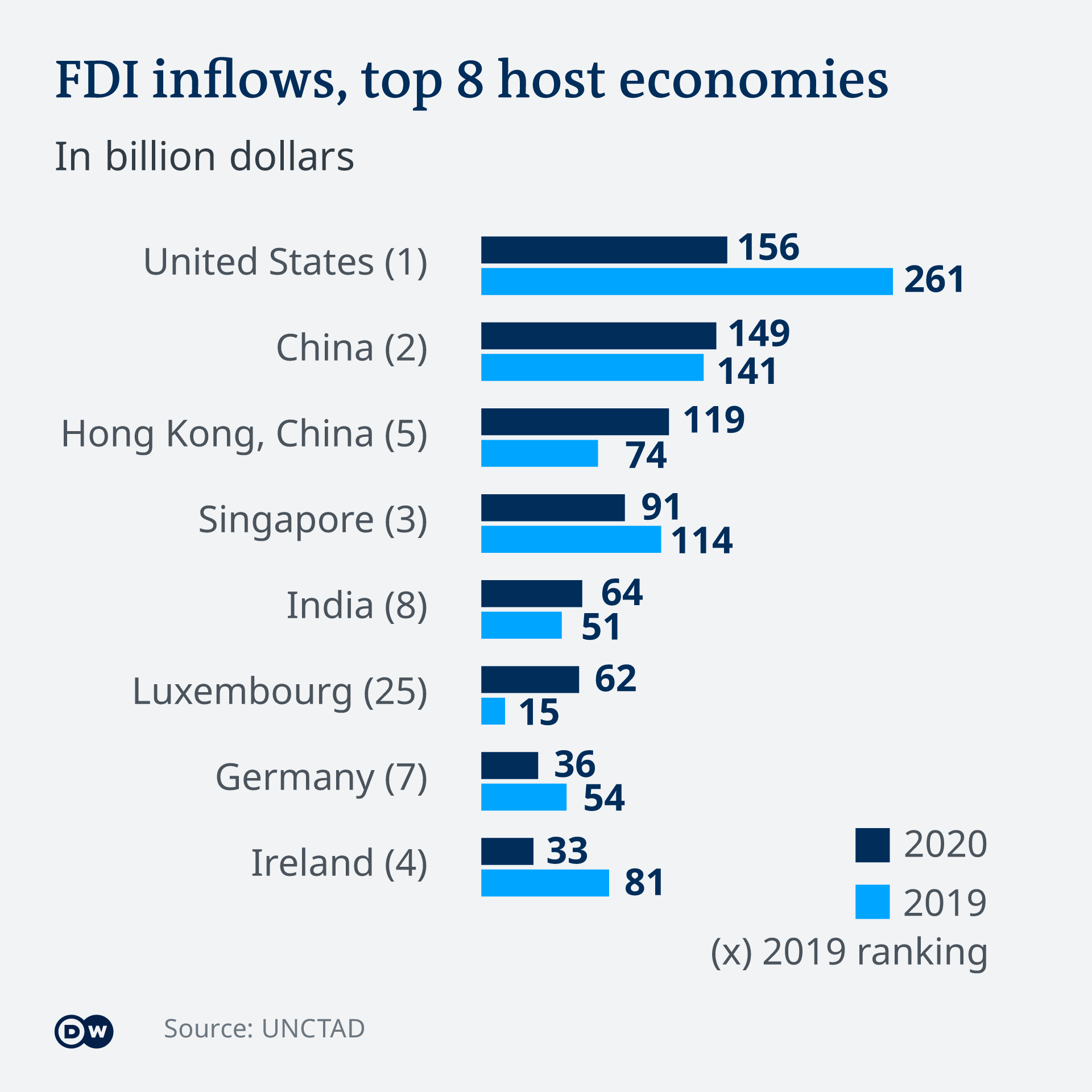 FDI flows to Africa declined by 16% to $40 billion — a level last seen 15 years ago — dealing a blow to the continent's industrialization efforts. The drop in FDI was most pronounced in resource-dependent economies amid low prices in energy and other commodities.

Foreign investment, especially that in greenfield industrial and infrastructure projects — involving fresh construction — has been instrumental in Africa's growth. The value of announced greenfield projects in Africa fell by nearly two-thirds last year.

Investments in sectors such as infrastructure, education, health, and food — critical to meeting the United Nation's Sustainable Development Goals (SDGs) — also fell drastically. Renewable energy was an outlier, which saw an increase in foreign investment.

"The decline in investments in SDG sectors last year is a real concern in all developing countries. Much of the progress achieved in the promotion of investment in the SDGs since 2015, when the goals were adopted, was undone last year," Bolwijn told DW.

Africa receives only a relatively marginal share of global FDI, with the least-developed countries attracting only 2% of global foreign investment flows.

"So, they already have a very significant investment gap in the SDGs and the decline of last year is just adding to that," Bolwijn said. "Given that much of this investment has fairly long gestation periods, the recovery might also take quite a little bit of time to get to pace."

Global FDI flows are expected to recover some lost ground this year with an increase of 10 to 15%.

"The relatively modest recovery in global FDI projected for 2021 reflects lingering uncertainty about access to vaccines, the emergence of virus mutations and delays in the reopening of economic sectors," the report said.

However, the recovery will be uneven, with developed economies expected to drive global growth in foreign investment, helped by strong cross-border M&A activity and large-scale public investment support.

While FDI inflows to Asia are expected to remain resilient, investment flows to Africa, and to Latin America and the Caribbean, are unlikely to recover significantly in the near term.

"These regions have more structural weaknesses, less fiscal space and greater reliance on greenfield investment, which is expected to remain at a low level in 2021," the report said.