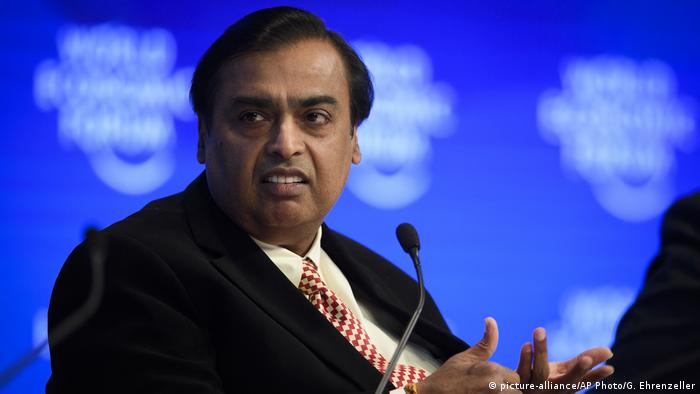 The platform has been launched on a pilot basis and is currently available to online shoppers only in three suburban areas of India's commercial capital Mumbai. The company says it will gradually be expanded to other parts of India.

The platform doesn't sell groceries directly, but instead creates an online marketplace, connecting offline merchants to customers via an app. JioMart currently offers a catalog of about 50,000 grocery items and promises "free and express delivery."

Ambani, the billionaire tycoon and head of Reliance Industries, is worth an estimated $60.7 billion (€54.28 billion), making him the richest person in Asia and the 12th richest in the world.

While oil refining is the group's core business, it is also a big player in telecom and retail, among others.

Reliance Retail, which was founded in 2006, is the largest retailer in the country by revenue. It has thousands of physical stores nationwide and serves millions of customers every week.

And Reliance Jio is now the second-largest telecom operator in India, boasting more than 360 million subscribers. The carrier, which started commercial operations in the second half of 2016, disrupted the Indian telecom sector by offering ultra-cheap data and free voice calls.

Reliance will be hoping to leverage Jio's massive subscriber base to reap success on the e-commerce front.

"With its own telecom network, Reliance in India can go way beyond Amazon and Flipkart," Arvind K. Singhal, head of the management consultancy Technopak Advisors, told Bloomberg in April.

"The Reliance ecosystem — still in progress — for digital economy has multiple, very powerful components that include retail, entertainment, education and financial services."

India's online retail market has been growing rapidly over the past several years and is forecast to be worth about $200 billion by 2027. The growth has been driven by an expanding economy, the country's young demographics and increasing internet and smartphone penetration.

The sector has also received a boost from Prime Minister Narendra Modi government's relentless push for a cashless economy. People in big cities are increasingly buying all sorts of items — from clothes to groceries — online.

The market is currently dominated by Amazon and Flipkart (the latter is Indian-founded, but now owned by Walmart), with both firms together having almost 75% market share in India.

Both of them have already spent billions trying to capitalize on Asia's third-largest economy and have ambitious plans to expand and tap into new markets in the country. Amazon has already earmarked $5 billion in investment funds for India. It has also bought stakes in a number of Indian retailers.

But both companies were hit last year when the Indian government tightened regulations governing foreign e-commerce giants, after brick-and-mortar retailers complained that the e-commerce firms were unfairly selling products at discount prices.

The new rules banned companies like Amazon from selling products from firms in which they have a stake. They are also forbidden from entering into exclusive deals with sellers.

Even the US government has complained about the regulations, with Commerce Secretary Wilbur Ross saying the rules had made expansion in India slower for both the US e-commerce giants.

In addition to bureaucratic hurdles, both Amazon and Flipkart can now expect to face fierce competition from Reliance JioMart.

Gautam Adani has launched a hostile takeover bid of NDTV. The move has sparked fears about the future of media, particularly in light of the billionaire's relationship with Prime Minister Narendra Modi.

India fell eight places in the World Press Freedom Index, down to 150 out of 180 countries. Critics say the ranking reflects increased pressure and violence against journalists.

Indian police claim marijuana smugglers are using Amazon's website to order and move their product. Amazon has flatly denied the accusation despite police and media reports.