Beijing officials have demanded an apology from a German company over shirts allegedly insulting to China. The controversy could even taint relations between the two countries, the embassy warned. 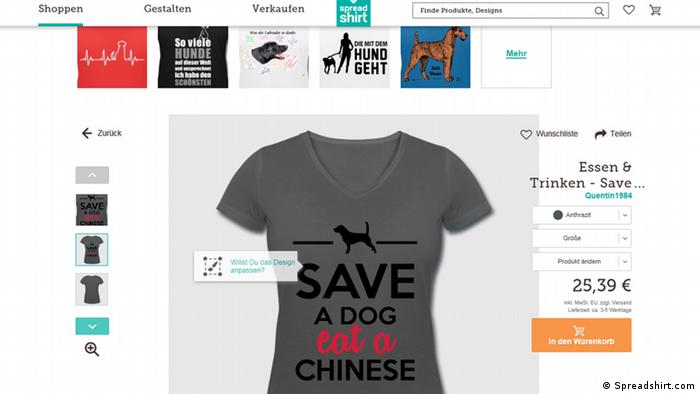 Chinese officials in Germany are warning of a diplomatic row that could start over a seemingly innocuous clothing line.

The Chinese Embassy in Berlin reiterated its calls on Friday for the German company Spreadshirt to stop selling certain shirts that come emblazoned with English slogans like "Save a dog, eat a Chinese" and "Save a shark, eat a Chinese." A third T-shirt depicts two Chinese-style characters having sex, with the caption "Now I understand Chinese" written underneath.

The embassy released a short statement calling for the website to halt the sale of the shirts and to apologize. "At the same time, we demand from the German supervisory authorities to exercise their duties with regard to the business activities of the company and the website so that the friendly feelings between our two people will not be damaged."

The statement also said trade and economics officials had already met with representatives from the company "to express our great displeasure" with the T-shirts.

China's "People's Daily" reported that the website had pulled the shirts, but a cursory check on the company's website found that the items were still being sold as of Friday.

According to the "Global Times," another Chinese state-run news outlet, a spokesperson for the Leipzig-based Spreadshirt said they were not responsible for the shirts, as the company serves as a platform for other designers to sell their clothing.

The fracas comes not long after German politician Günther Oettinger was forced to apologize after referring to Chinese people as "slanty-eyed" during comments made in a leaked video.

A tough 2016 is leading German companies to curtail plans for China, but not to leave the market. But an annual survey suggests they think the business climate will improve next year. (29.11.2016)

Germany's Economics Minister Sigmar Gabriel, accompanied by a large business delegation, is in China for a five-day visit. The trip has plenty of potential for conflict. (31.10.2016)