A video of Günther Oettinger making jokes about Chinese diplomats and "compulsory gay marriage" has sparked controversy. Oettinger, who will take over the EU Commission's budget post, said he had not meant to offend. 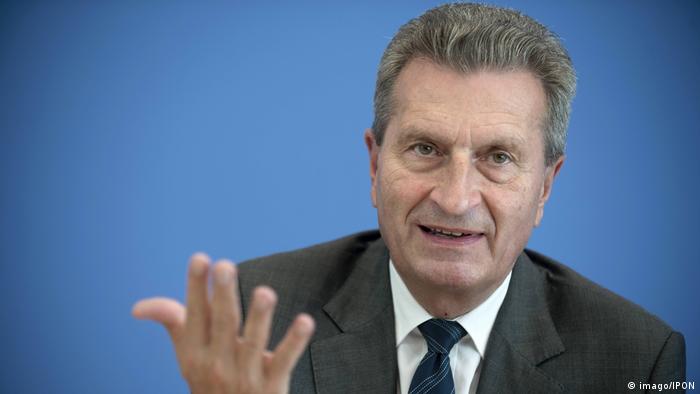 European Commissioner Günther Oettinger was on the defensive on Saturday after a video surfaced online of him making jokes his critics called racist and homophobic.

A YouTube user called "Sebas Travelling" posted the video on Friday, saying the comments were from a speech Oettinger gave on Wednesday in Hamburg.

Oettinger first described how he loves to read print newspapers while lamenting that many read the news with their "heads down, display on" - an interesting remark from the current European Commissioner for Digital Economy and Society.

His next comments, however, took aim at Chinese diplomats during a comment about the EU's future and its political weaknesses.

"Last week Chinese ministers were with us for the annual China-EU summit. Nine men, one party. No democracy. No women's quota, no women," Oettinger said while the crowd lightly chuckled.

"All of them in suits, single-breasted jackets, dark blue. All of them had their hair combed from the left to the right with black shoe polish," he said of the Chinese diplomats.

The YouTube user wrote that prior to filming the video, Oettinger used a racial slur to describe people of Asian descent.

In an interview with the German newspaper "Die Welt" on Saturday, Oettinger, without apologizing, defended himself against accusations of racism, saying his comments needed to be heard "in context."

Oettinger said his use of a derogatory term in reference to China was a "somewhat sloppy statement that was in no way meant to be disrespectful to China."

His comments, Oettinger said, were meant to warn against German complacency in the digital sector and highlight the need for Europe to catch up to countries like China and South Korea.

The video also showed Oettinger criticizing Germany's current political agenda, listing off issues such as maternity leave, retirement and child care allowances. He finished the list by saying that "perhaps compulsory gay marriage will be introduced."

"The German agenda does not meet my expectation of German responsibility in any way," he said to applause from the audience.

Oettinger told "Die Welt" that he has nothing against gay marriage, and that he merely wanted to add the issue of economic competitiveness to the German agenda.

"The problem is not the embarrassment, but rather the mentality" that lies behind Oettinger's comments, wrote Barley on Twitter.

In addition to comments about Chinese delegates and gay marriage, Oettinger also remarked that former German Chancellor Gerhard Schröder now has some time on his hands since the North Stream 2 pipeline will not be built "and his wife is gone."

Schröder is currently a member of the board for the pipeline project between Russia and Germany. The former chancellor's fourth marriage ended in divorce last year.

On Friday, it was announced that Oettinger will take over from outgoing EU Commissioner Kristalina Georgieva, overseeing the 28-member bloc's budget portfolio.

Oettinger previously served as the state premier of Baden-Württemberg until 2010 and is no stranger to making headline-grabbing comments, having once commented he would rather commit suicide than be married to far-right populist Alternative for Germany (AfD) party leader Frauke Petry.

German Günther Oettinger is to replace Kristalina Georgieva as the European Commission's budget commissioner. Bulgaria's Georgieva resigned on Friday and will move to become CEO of the World Bank. (28.10.2016)

The German chancellor is winding up her ninth state visit to China. Observers predicted this trip would be more difficult than previous ones: China is more self-confident. That's also a chance, says DW's Dagmar Engel. (14.06.2016)