Banned chlorofluorocarbons (CFC) are being blatantly used in China's plastic foam industry, claims a green campaign group. A recent spike in emissions of the gas, a potent destroyer of ozone, has baffled scientists. 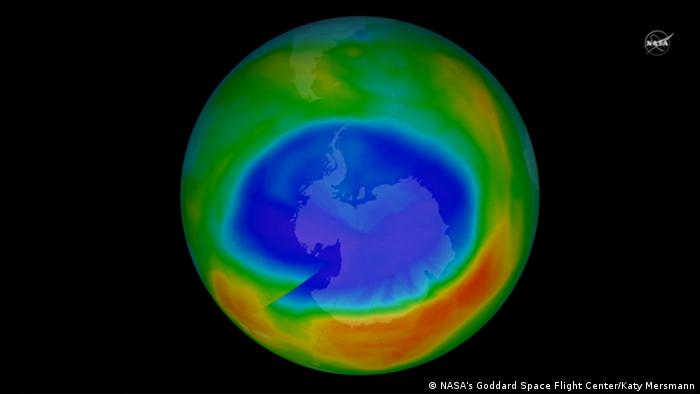 A mysterious rise in emissions of ozone-depleting gas has been traced to Chinese plastic foam factories, a green campaign group claimed in a report published on Monday.

The Environmental Investigation Agency (EIA) said 18 factories in 10 Chinese provinces admitted to using chlorofluorocarbons (CFC), despite it being banned in 2010.

In May, an international team of scientists published research that showed the expected decline of CFC-11 in the atmosphere had slowed by half since 2012, suggesting it was being illegally produced.

Their data pointed to East Asia as the source of renewed production of the gas, a potent destroyer of the ozone layer that protects life on Earth from dangerous solar rays.

A rise in CFC emissions could put at risk the healing of the ozone layer which was severely damaged by the rampant use of CFCs, initially developed as refrigerants during the 1930s.

The discovery of a hole as large as North America set off a global alarm, prompting countries to sign the Montreal Protocol in 1987 that banned the use of CFCs. The production of CFCs officially ended in developing countries in 2010.

The EIA investigators, posing as buyers, found that the use of CFC-11 is rife in China's plastic foam sector because the harmful chemical is cheaper than its alternatives and makes more effective foams, which are in high demand as an insulator in the booming construction industry.

"Detailed discussions with company executives make clear that these are not isolated incidents but instead represent common practice across the industry," the investigators said.

EIA said several companies admitted to exporting the banned CFC agents by mislabeling them as Hydrofluorocarbon (HFC) compounds and other chemical blends. This could mean that countries that have pledged to ban CFCs may have inadvertently imported them.

China, a signatory of the Montreal Protocol, says it successfully ended the industrial practice of using CFCs in 2007.

Hydrofluorocarbons, which replaced ozone-depleting CFCs, proved disastrous for climate change. Countries have now agreed to ban HFCs - but that may not bring as big a climate benefit as was hoped. (17.10.2016)

Asia's current air conditioner use is only a fraction of its potential. With increasing affluence and urbanization in the region, what will be the environmental effects when millions more machines start running? (11.09.2014)

Stratospheric Research - searching for the secrets of the ozone layer