Rescuers are trying to pump water out of the flooded mine shaft while piping air to the trapped workers. The entrance to a flooded coal mine in Hutubi county, China

Rescuers were trying to reach 21 miners trapped by an underground flood in the Xinjiang region of China, a state news agency reported on Sunday.

The Fengyuan coal mine in Hutubi County in the northwest of the country flooded at around 6:10 p.m. local time (1010 GMT/UTC) on Saturday, the Xinhua News Agency said.

It added eight of the 29 miners working at the location had already been rescued.

Staff were carrying out upgrading works at the site when disaster struck. 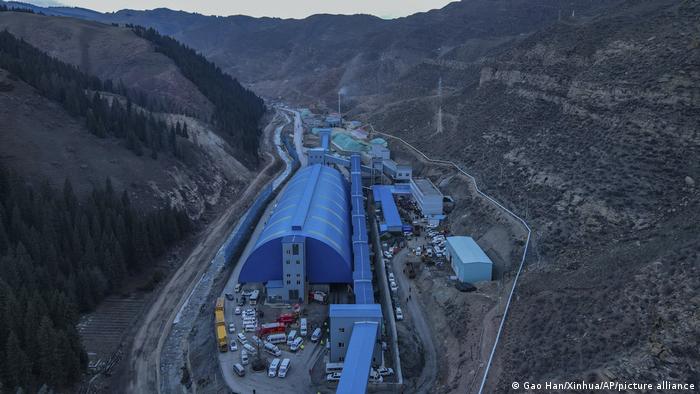 Chinese state-controlled broadcaster CCTV reported that 12 miners were on one platform, with eight more on a second platform, and the last worker is currently trapped in an escape route where water had originally entered.

"The working platform with 12 people is 1,200 meters (3,900 feet) from ground level and the underground terrain is complex, making rescue difficult," CCTV said.

Coal mines in China are among the world's most dangerous, with explosions and gas leaks a regular occurrence.

Mining accidents in eastern Shandong province in January and the southwest city of Chongqing in December killed more than 30 miners.

A miner has died after reportedly falling into a coma after an explosion in Shandong province left him and 21 others trapped underground. Rescuers have been scrambling to deliver supplies and establish an escape route.

The first miner to be lifted to safety was in an "extremely weak" condition after spending 14 days underground. The workers became trapped after an explosion at a gold mine in northern China.