Chemnitz: Verdict in antisemitic attack on Jewish restaurant | Germany | News and in-depth reporting from Berlin and beyond | DW | 08.09.2021

Suspected far-right extremist Kevin A. was given a one-year suspended prison sentence after being found guilty of a serious breach of the peace and bodily harm for his involvement in an attack on a Jewish restaurant owner.

Wednesday's one-day trial dealt with one of the most notorious incidents to happen during  racist rioting that struck the eastern German city of Chemnitz three years ago.

The 30-year-old defendant was charged with dangerous bodily harm, breaching the peace, and property damage for being among a group of at least 10 men who threw fist-sized rocks and other objects at Uwe Dziuballa, the Jewish owner of the restaurant Schalom, near the city center in late August 2018.

The incident was of many that happened during several days of far-right demonstrations and racist violence that followed the killing of 35-year-old Chemnitzer Daniel H., who was stabbed during a fight with an Iraqi and a Syrian.

The one-year suspended sentence matched the prosecution's demand, though the defense had asked for an acquittal, on the grounds that the DNA evidence was not conclusive. But Judge Börner said there was plenty of supporting evidence, including recovered chat messages, which showed that the defendant was in Chemnitz at the time of the attack. He also said the crime fit into Kevin A.'s far-right world-view, which had been established from material found on his phone.

The defendant had also faced previous convictions for drug dealing and another breach of the peace in Hamburg, which also involved rocks being thrown.

The fact that Kevin A. only received a suspended sentence surprised some of the spectators in the courtroom, given that he had been convicted before.

But the judge said the punishment was mitigated by the fact that Dziuballa had escaped relatively unharmed, that the property damage was minor, and the fact that had the defendant had kept a clean record in the past two years. 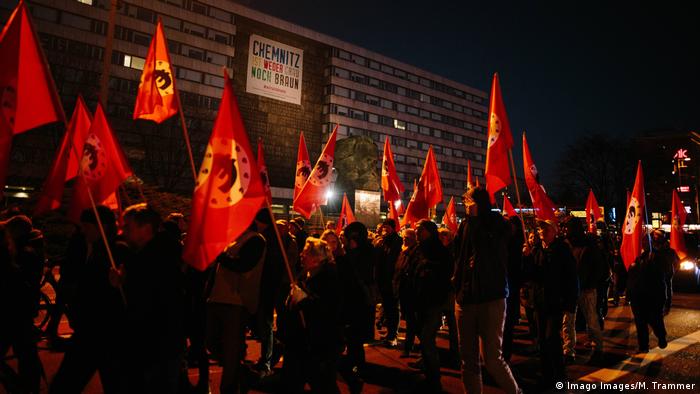 Far-right demonstrators marched through the streets of Chemnitz in November 2018, claiming to perform satire

Kevin A. did not speak in court and sat impassively throughout, keeping his COVID-mandated surgical mask on and his hands clasped on the table in front of him. (In the German judicial system, defendants are not required to make a plea, or to testify at all.)

Uwe Dziuballa testified first, sitting barely two meters away from his alleged attacker — which did initially make him slightly nervous, he admitted.

"But then when I looked over and saw him, something happened that I had hoped for," he told DW afterwards. "The hate-filled eyes from that night had stayed with me, and I had hoped that when I looked over to look a completely normal person in the eye, it would calm me down. And when he seemed a little nervous — he couldn't maintain eye contact — a certain calm came over me. I'm sort of happy with that. It's out my head now because of that." Uwe Dziuballa, the Jewish owner of the Restaurant Schalom, has grown tired of describing the attacks

The restaurant owner left before the verdict was made, mainly because, he said, the trial had already been delayed twice and he had important appointments in the afternoon.

"For me, this is already a result," Dziuballa added. "In my experience, the extent of the punishment doesn't really change anything. For me, the success is in the fact that it came to trial and probably to a conviction."

He was particularly relieved because, following the events, several social media posts appeared claiming he had made the story up, because his restaurant was shut on Mondays (in fact, the restaurant had been hosting a private event).

"It's good that beyond all this hysteria and polarization, there is a result here today," Dziuballa said.

The far-right demos in Chemnitz in 2018 became notorious for attracting extremists from across Germany, as several far-right organizations, including the Alternative for Germany (AfD) political party, mobilized supporters to descend on the city.

A week of unrest and political upheaval culminated in one of the biggest ever assemblies of neo-Nazis on September 1, 2018, when over 10,000 people gathered in various demonstrations.

Some 282 crimes, including physical assault and racist abuse, were investigated by authorities in connection with the violence, the Saxony Justice Ministry recently revealed. Some 171 of these investigations were dropped, mainly due to lack of evidence or because the perpetrators could not be found, the ministry said in response to an information request by the socialist Left Party.

A history of antisemitism

Kevin A. is not from Chemnitz either, but from Stade, a small town outside Hamburg where he was eventually tracked down thanks to DNA evidence in December 2019.

Dziuballa was born in Chemnitz and once told the Frankfurter Rundschau newspaper that his family can trace its roots to the city to before the creation of the German Empire. He opened the Schalom in 2000; it has since established itself as one of the best-known Jewish restaurants in Germany. He also says it has regularly been smeared with anti-Semitic graffiti since it opened.

"Even if it's taken three years for it to come to a trial, it's a signal that throwing stones and objects at a Jewish restaurant, or in this case at me, can have consequences," Dziuballa said. "The message that is being sent is that in a democracy it's not normal to throw stones or objects when you have different opinions, and that a situation like this can bring consequences."